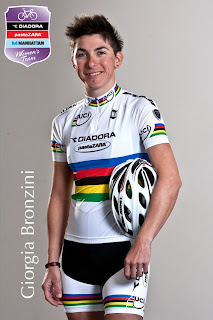 Giorgia Bronzini, born in Piacenza on this day in 1983, won the World Championship Road Race in 2010 and 2011. Bronzini's website says that she discovered and fell in love with cycling at a young age and soon found that she could beat the boys; this gave her confidence and encouraged  her to start training seriously, then to begin racing on the track - where she began winning races immediately. Her first major wins came in 2001: the first was the Junior Points Race at the Nationals, the second was the same event at the World Championships in the USA.

Bronzini's track career remains successful to the present day - she has won a number of important races, finished top three in many National, Europeanand World Championships and became World Points Race Champion at Elite level in 2009; but, following her third place on Stage 7a at the Giro Donne in 2003, she began to concentrate on road racing from 2004 onwards. That year, she won three stages at the Eko Tour Dookola Polski and Stage 6 at the Holland Ladies' Tour; a year later she won the Giro del Lago Maggiore, the Giro del Friuli Donne, Stages 1 and 3 at the Giro del Trentino Alto Adige-Südtirol, Stages 3, 6 and 9 at the Giro Donne and Stages 3 and 5 at the Giro della Toscana. Many more stages went her way in the subsequent years, including an incredible consecutive four victories at the Trophée d'Or Féminin in 2008 and Stages 1, 2, 4, 8 and 9 at the Gran Caracol de Pista a year later.

None of her previous wins comes close to the 2010 Worlds triumph, when she beat the phenomenally powerful and supremely talented Marianne Vos into second place - but for many fans, it was the 2011 Championships that rates as the highlight of her career to date. Vos, enjoying a spectacular year that brought her a total of 46 victories (Eddy Merckx himelf managed only ten more than that in 1973), seemed certain to take back the title she'd last held in 2006 and few fans expected her to experience any real difficulty in doing so. Yet once again Bronzini was able to get the better of her, staying with her all the way to the line and then finding just enough power to stay a hair's-breadth ahead when it mattered. The look of dismay of Vos' face said it all, but only minutes later on the podium it was clear that she accepted she'd been beaten fair and square by one of the greatest champions in cycling history.

Óscar Pereiro
Born in Mos, Galicia on this day in 1977, Óscar Pereiro became Under-23 Cyclo Cross Champion of Spain in 1997 and won silver at Elite level the next year, then began to concentrate on road racing. He got off to a very good start, winning second place in the Youth category at the 2000 Volta a Portugal and second overall at the 2001 GP Matisinhos, then an impressive eleventh overall at the Giro d'Italia - his first Grand Tour - a year later. In 2004 he came sixth in the Prologue and tenth overall at the Tour de France.

These look very much like the race results of a rider who is going to become very great indeed - most riders will not even finish their first Grand Tour, never mind come eleventh, and once they've experienced the Giro and the Vuelta they usually go back to step one at their first Tour and find it's much, much harder than anything they've experienced before. Only a tiny number do better than Pereiro did - the superhumans, like Hinault who won the Tour the first time he took part.

Yet in the next couple of years, it began to become obvious that within sight of the very top level if the sport was as close as Pereiro was going to get. He was tenth at the Tour again in 2005, then second in 2006 - until winner Floyd Landis was disqualified for doping, at which point Pereiro became default victor. He tried to win on his own merit in 2007, but finished in tenth for a third time, with a disadvantage of 14'25" to winner Alberto Contador. His chances were ended by a crash and broken arm the following year, by which time he'd been relegated to support rider for Alejandro Valverde and was in 15th place overall; when he abandoned after Stage 7 the following year he was in 46th place.

Pereiro joined Astana for the 2010 season, but retired early in the year. He has since devoted his life to football, his childhood dream, and made two professional appearances with Coruxo FC that year.

Pereiro was accused of doping by French newspaper Le Monde in January 2007 after it discovered he had tested positive for Salbutamol which, though not believed to have any performance-enhancing effects in healthy athletes, was nevertheless banned by WADA except in cases where an athlete was able to provide medical proof that they needed it, as is commonly the case with asthmatics (it has since been downgraded - an athlete will not be required to provide an explanation provided detected levels of the drug do not exceed 1,000 µg/L in the urine or blood plasma). It was claimed that the UCI had given the rider permission to use the drug retroactively, after he had tested positive, and it began to look as though a scandal might be brewing when French anti-doping officials went against the UCI and demanded Pereiro provide a legitimate reason to use the drug within one week. Exactly seven days after Le Monde's claims, the French dropped the investigation, stating that Pereiro had provided them with satisfactory evidence.

Cesare Benedetti
Born in Rovareto, Italy on this day in 1987, Cesare Benedetti had an amateur career good enough to snare him a place as a trainee with Liquigas halfway through 2009; he ended his asoociation with them at the end of that season when ProContinental team NetApp offered him a full professional contract, and he won the Belgian Plombières road race and third place on Stage 4 at the 2011 Tour of Britain for them.

In 2012, NetApp - and Benedetti - made their Grand Tour debut after receiving a wildcard invitation to the Giro d'Italia. Team management believed that riders might have the ability to challenge for tenth place on or two stages; Benedetti finished Stage 6 in fifth place.


Kamakazi (the spelling is intentional), born in Brisbane on this day in 1981 and given the name Jamie Hildebrandt a short while later, represented Australia in the Men's BMX Race at the 2008 Olympics. He has officially and legally changed his name and now works as a boilermaker, still competing in BMX competitions.

Cameron Wurf, born in Sandy Bay, Tasmania on this day in 1983, won the  Chrono Champenois in France and the Individual Time Trial at the Oceania Games in 2007, came fifth overall at the Tour of Turkey in 2011 and second overall at the Tour of Quinghai Lake in 2012. Before coming to cycling he was a champion rower, representing Australia at the 2004 Olympics.

Giuseppe Muraglia, born in Adria, Italy on this day in 1979, won the Clásica de Almería in 2007. After the race he tested positive for Human chorionic gonadotropin, a hormone that causes an increase in the body's production of testosterone and which is commonly taken in conjunction with steroids; he was sacked by his Acqua&Sapone team and banned from competition for two years.

Lucas Brunelle
Born in Boston on this day in 1971 and raised in Martha's Vineyard, Lucas Brunelle began riding BMX at the age of 15 and road racing two years later, soon proving himself sufficiently talented to earn a place at the US Olympic Training Center, where he was coached by Chris Carmichael - and, not long after getting there, was almost thrown out again after a fight with another rider.

That early history was the first signs of a confrontational style that would lead to numerous arguments with riders and race organisers in the future. He had no respect for rules or tradition, maintaining a "win at all costs" attitude that saw him ride on roadside pavements and force his way through groups of blocking cyclists during races, risking their safety as well as his own. It worked, however, and he won good results for his team; but after a few years he began to find legal racing boring and found work as a bike courier, which gave him a way into the shadowy world of alleycat races - unlawful, sometimes downright illegal unofficial races on urban roads. His aggressive style made him a legend in the eyes of some and a liability in the eyes of a roughly-equal number of others and his refusal to stay out of the "door zone" - the space along parked cars into which drivers who can't be bothered to check behind them sometimes open their doors into the path of cyclists - has led to it becoming known among Boston's underground bike groups as "the Lucas Zone." He enjoyed more success in alleycats than in legal racing, but has become known primarily for the documentary films he makes about them (he concentrates his films now that he has a multi-million dollar IT company, saying that people rely on him to provide employment). The trailer to his most famous, Line of Sight, can be seen below.


Lucas became involved in Critical Mass and for that reason is often considered a cycling advocate, though many advocacy groups condemn him for glorifying dangerous riding and bringing cycling into disrepute. However, despite his "Fuck bike advocacy" comments during an interview with Bicycling magazine, he is, in his own way, a bike advocate - but rather than believing that motorised traffic should be aware of and leave room for cyclists, he believes that the bike is the king of the road and that motorised traffic get out of the way. It is a point of view that many cyclists enjoy hearing and some share, even though few will admit as much.