Who Had The Blingest Team Bus?

So the 2012 Tour de France is over, and the sideburns won it - cue OBE, a few weeks in which white vans will give way to cyclists and a general feeling of well-being among British cyclists and fans.


That means it's now time to announce the results of another competition, one that runs alongside the General Classification, King of the Mountains, Points, Youth, Teams and Combativity. It's unofficial, but the sums of money involved are stupendous. It is, of course, the legendary Who Had The Blingest Team Bus? competition.

RadioShack-NissanTrek's Mercedes (extra blingpoints for the Merc badge) is a fine-looking beast  - and driver Vinny, seen here earning extra pocket money by washing it, is not without his charms either. Hang on a minute, though... Yes! Thought as much! It's the just old LeopardTrek bus given a quick going-over with a can of Dulux "Hot Paprika!" That's not very conspicuous consumption, is it? Minus 20% for that!

However, RSNT have a secret. To save in fuel costs, the bus's engine was removed and the rear wheels were connected to Jens Voigt's stationary bike. This means that it now holds the record for Fastest Bus in the World. Serious bling is, therefore, won back. Also, extra points for replacing the alarm system with a lion.

Cost: N/A if Brian Nygaard paid for it.

AG2R-La Mondiale's bus really split opinion among the panel of judges: 30% were reminded of chocolate and liked it, 30% were reminded of poo and didn't, the rest were more interested in how skinny Maxime Bouet's thighs are or had sneaked out for a smoke. Therefore your beloved writer decided to throw democracy to the wind and decide it alone - and it's a thumbs-up, because when it's all shiny and glossy, that shade of brown does indeed look appealing.

It's still a rubbish colour for their shorts though.

Cost: A large enough chunk of the team's budget for there not to be enough left over to buy nicer shorts.

Lampre-ISD's pink and blue kit doesn't appeal to everyone, though it's far more popular than the old ; but when the colourscheme is reduced to a few tasteful stripes on their Euromar bus it looks rather stylish. However, since both Lampre and ISD manufacture steel and presumably have access to welding equipment, they could have modified it and come up with a much better vehicle. Fans will, therefore, be very disappointed if Lampre show up next year in anything less impressive that this...

Lampre blingrating: 10% - it's far too restrained and tasteful to be bling. Now that they're co-sponsored by Sharp, Slipstream Sports have more electronic gadgets than the Starship Enterprise and Stephen Fry combined - at a loss as to what they should do with them all, they decided to grab considerable blingpoints by sticking a great big flat-screen TV on the outside of their bus, thus enabling fans to keep up with the action without the effort of actually turning around and facing the direction of the race. Guys, that is class.

Cost: More money than you will ever have in your life

Argos-Shimano are so proud of their bus that they've uploaded a YouTube video showing it off - and they should be proud, too, because it's got a sick paintjob (as the kids would say) and enough gizmos to out-do any one of the modified hot-hatchbacks that hang around the carpark of your local McDonald's every Saturday night. It's also got a multi-screen entertainment system more than capable of pumping out phat beatz, earning the team their unique place as the only non-ProTour squad to make it through to the finals of this exclusive competition. The team has since announced that for the 2013 Tour, the bus will be fitted with a computerised Tyler Farrar detector that will automatically lock the doors and windows if he comes within 10 metres.

Cost: If the bus was filled with 1 Euro coins, it probably wouldn't be enough to buy another one.

Argos-Shimano blingrating: 72% (points deducted for that urinal - why would you want your team bus to look like a public lavvy?) 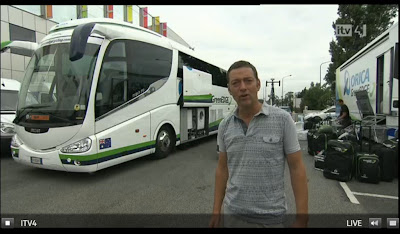 Other teams thought new kids on the block Orica-GreenEDGE had brought their own private jet when they rocked up to Liège in this barge - which, a highly impressed Ned Boulting reported, was a whole metre longer than Sky's bus! Precisely how long it is was never made clear; Ned tried to estimate it but couldn't due to the rear end of vehicle being over the horizon but, according to rumours doing the rounds at the race, GreenEDGE practiced for some of the shorter stages by riding from one end to the other on the inside as it was being driven to the day's stage town (they didn't practice for the longer stages in the same way, though - that'd just be silly).

According to the International Ned Boulting Fan Club, what really impressed Ned was not the length nor even the revolutionary crash-proof front (achieved by making it an exact copy of a Nokia 3210 cellphone) - it was the on-board fully-fitted washing machine. That, ladies and gents, is bling incarnate. 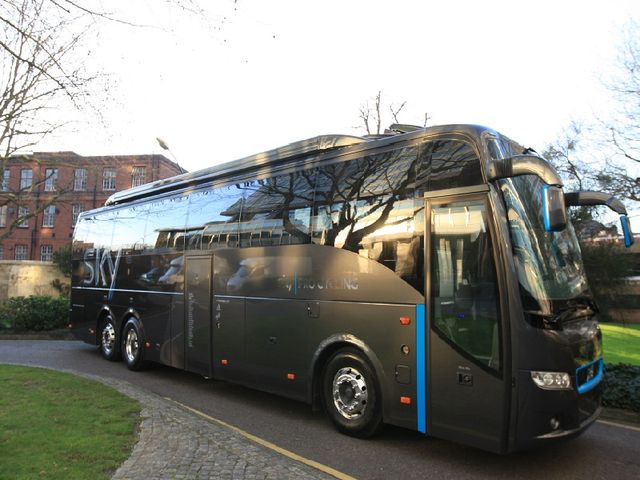 This is Sky ProCycling's Volvo 9700 Tri-Axle and, no matter where you live, it is better than your house. Stood on end, it would overtake The Shard as Europe's tallest building and it comes fully equipped for intergalactic travel - when in orbit around Earth, it eclipses the sun. It has nine leather seats, sleeping facilities, two showers, two toilets (with super-luxury quilted bog roll), an office that can be converted into a massage suite and - a real essential for nine young men on a road trip - mood lighting. The 10 million watt sound system has reportedly now been reprogrammed to make it unable to play Lesley Garrett CDs.

Cost: probably enough to finance a thousand women's teams for ten years/end world hunger (probably both, with enough change for a bag of chips on the way home), but not nearly as much as sponsor Rupert Murdoch saves through tax avoidance each year.

Sky Blingrating: 95% - judges originally gave it 100%, but deducted 5% when it was pointed out that it doesn't have 24-carat gold wheels.


And the winner is...
Garmin-Sharp and Orica-GreenEDGE both receive 100% blingratings for their mobile überhotels, with GreenEDGE just edging ahead due to theirs being longer than a Jackie Durand solo breakaway. However, while it's not the biggest, Sky's bus with its massage suite is a hard to beat. That they have not one, but two of the monsters means that Sky ProCycling are hereby declared winners of the 2012 Tour de France Who Had The Blingest Bus? competition. Let our rejoicing be without boundaries, and so on.
Posted by john_orbea at 20:59