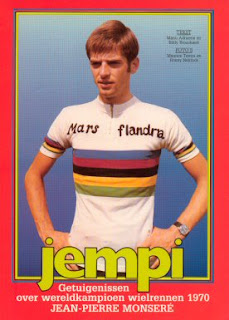 Jean-Pierre Monseré, known as Jempi, turned professional with the famous Flandria team in 1969 and won the Giro di Lombardia that year. In 1970, he won the World Road Race Championship - thus becoming the second youngest rider to have done so at 22 years old (for all you fact hounds, the youngest was Karel Kaers who was 20 when he won in 1934). 1971 started well with victory at the Vuelta a Andalucia, but tragedy struck on the 15th of March in 1971:  he was killed instantly during the Grote Jaarmarktprijs when he collided with a car on the parcours between Lille and Gierle.


As if it's not confusing enough that Sylvère and Romain Maes raced one another but were not related, there's also a Natacha Maes who was born on this day in 1965 and isn't related to either of them (there's also a Nikolas Maes, born in 1986 and not related to any of them). Natacha won the Belgian National Road Race and Time Trial Championship races in 2004, keeping the Time Trial title the following year. She was born in Watermael-Boitsfort but now lives in Sussex, Great Britain.