Another missed opportunity for British news channels and papers 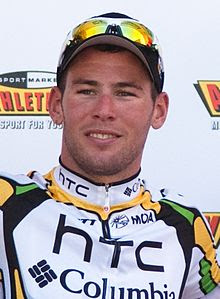 So Mark Cavendish - current World Champion, one of the highest-profile British sportsmen of the day and the highest profile British cyclist since Tom Simpson (and, arguably, of all time) - achieves the first ever British victory in Kuurne-Brussels-Kuurne, one of the most important European races. That'll be all over the news, surely?

Er- apparently not. You need to look halfway down the page on BBC Sport until you find a link to the story. Nothing at all on Sky Sports, although you'd have thought that as the big name sponsor of Cav's team  Sky had a vested interest in promoting the win.

Even The Scum isn't paying attention, despite the fact that any Cav story offers opportunity to print a reader-pleasing picture of Peta. The Grauniad's got a mention halfway down the page while The Daily Fascist places it right down near the end, which is understandable for them, really: after all, any write-up on the race is going to have to mention Belgium at some point, and just seeing the name of the country gets your average Mail-reading scumbag so worked up they risk a heart attack. Killing your readers is not sound business sense, so we can let them off this time (let's not forget that The Mail was the only British paper to support the Nazis, however). The Daily Star has it right there on the first page of the website - near the bottom, admittedly, but they get points nevertheless (and one extra for the "Whitney mum haunted" headline further up). The Star is famously owned by pornographer Richard Desmond, and even his filthiest and most offensive publication The Daily Express is in on the action, albeit at the very bottom of the page. We didn't check The Times because you have to pay for that, and as far as we're concerned Rupert Murdoch has plenty enough money already.

Seriously, people! You are missing out here! Cav has everything a major celebrity needs - he's alright to look at (even "Quite good-looking," says Mrs. Cyclopunk, "for a cyclist"), he's got cheeky chappy style by the barrowload and he's very, very good at what he does, though talent is apparently not a necessity for celebrities these days. Cycling is massively popular in Britain right now and it's getting bigger - in fact, it's almost as popular here as it has been in France for several years, and there's a huge potential audience waiting for you to provide them with the stories.
Posted by john_orbea at 15:00