Francis Pelissier
Francis Pelissier died on this day in 1959. Born in Paris on the 13th of June 1894, he was the younger brother of Tour winner Henri and older brother of multiple National Cyclo Cross Champion Charles and with regards to talent, he was right in the middle again with a little of Henri's skill on the road and a little of Charles' skill off it.

This reflected in his palmares, which include a silver medal at the National Cyclo Cross Championships in 1914, winning Stage 3 at the 1919 Tour de France and Stage 1 in 1927 when he wore the yellow jersey for five days before becoming the first rider in history to abandon the race while leading it, a National Road Race Championship and Paris-Tours in 1921, Bordeaux-Paris in 1922, a second National Championship in 1923 and a third the next year, along with a second Bordeaux-Paris and then the Critérium International de Cyclo-cross in 1926, a silver medal in the 1931 National Road Race Championships, 2nd place in Stage 22 of the 1931 Tour and 3rd in Stage 18a four years later.

According to legend - never proved nor disproved - Francis ran a bike shop belonging to Evelyn Hamilton in London during the Second World War. You can read more about that, along with more on the remarkable Hamilton and what she may have been doing during the War, by clicking here.

Philippe Gaumont
Philippe Gaumont, born in Amiens, France on this day in 1973, won a bronze medal at the 1992 Olympics and first turned professional with Castorama in 1994, then moved to GAN and was twice caught by anti-doping tests that revealed traces of the anabolic steroid Nandralone in 1996. A year later he joined Cofidis, then provided two test samples that again proved positive for Nandralone in 1998 - however, the case was dismissed on a technicality.

Then in 1999, as part of the follow-up investigation into Festina Affair that began with the arrest of Willy Voets when he was found in possession of a car full of drugs, Gaumont failed another test which this time revealed amphetamine use. The full investigation, which shook cycling to its very core and ended the careers of numerous riders, managers, soigneurs and doctors, lasted for many years with Gaumont facing trial in 2004. In court, he made what he says was a full confession and revealed that he believed as many as 95% of
riders were doping in 1998. He also explained why, and how.

Many see Gaumont's confession as a shameful attempt to save his own skin by implicating others, as it may have been. However, the details he provided both during the investigation are both valuable and enlightening, as are those to be found in Prisonnier du dopage, "Prisoner of Doping," a book he wrote following the announcement of his retirement in the wake of the investigation.

In it, he argues that it is not possible for any rider to win a Tour de France without doping and reveals numerous techniques employed by riders to both obtain drugs in the first place and then hide their use, such as his claim that he and others would rub their scrotums with coarse salt to mimic the effects of saddle sores and be prescribed corticosteroid (a steroid hormone) skin cream. Whilst the use of the cream, commonly known as corticoid cream or lotion, is not illegal in competition, its use is strictly controlled and riders must declare when they are using it and provide solid medical reasons for doing so because anti-doping tests do not reveal the method by which the steroid entered the body. Thus, riders would fake saddle soreness symptoms in order to obtain permission to use the cream which could then be used to explain positive results caused by much more powerful - and illegal - steroid injections.

Romain Maes
Romain Maes, who was not related to Sylvère Maes against whom he frequently competed, was born on the 18th of August in 1913 and died on this day in 1983. He is primarily remembered as the winner of the 1935 Tour de France. 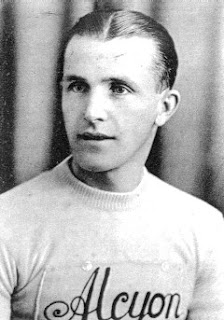 Maes turned professional in 1933 and won the Omloop van het Westen a short while later. He entered the Tour for the first time the following year, finishing two stages in 2nd place which looked set to lave him in a good position for a decent overall result, but then crashed badly during Stage 10 and was taken to hospital. 1935 was a better year right from the start - he started the race in the yellow jersey and kept it throughout, eventually winning with an advantage of almost 18 minutes on Amborogio Morelli in 2nd place, though his victory was made far easier with the departure of Antonin Magne who had collided with a car in Stage 7 - the same stage in which Francisco Cepeda crashed into a ravine, thus becoming the first rider to die during a Tour stage (Adolphe Helière had died on the Tour 25 years earlier, but during a rest day) - and a railway crossing that held up a chasing pack, permitting him to build up a one minute lead, didn't hurt either; although he lost his advantage to several punctures the next day. His win brought to a close a six-year series of French wins, guaranteeing him a hero's welcome when he got home to Belgium.

In the years immediately after his win, Maes would lose races through bad luck. The first was Paris-Roubaix in 1936, when he was clearly seen to have been the first rider to finish. However, the race judge declared that Georges Speicher (a French rider, coincidentally) had been first across. For a while, the crowd were angry and shouted insults, but just as rapidly they calmed down again and the declared result remained intact - he would never again win an important race. In 1938 he was leading Paris-Brussels with a 100m gap as the race entered the final 0.5km - more than enough to win. However, he rode into the velodrome where the race finished, rolled over the line and stopped - he'd completely forgotten that he needed to complete a lap, which gave Marcel Kint the opportunity he needed to take the lead and win. 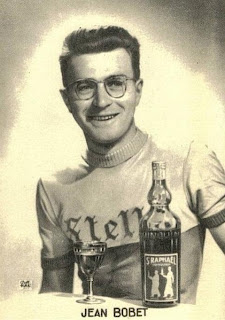 Jean Bobet, younger brother of three-time Tour de France winner Lousion, was born in Saint-Méen-le-Grand, France on this day in 1930. Often, cycling talent runs in families and is shared fairly equally - as has been the case with the Pelissiers, the Velits, the Garins and the Schlecks - but in this instance it was not and Jean was far less successful than his brother with 14th place overall in the 1955 Tour de France being his most notable Grand Tour result. He did, however, achieve some good results in other races and was World Student Champion in 1949, going on to win the Grand Prix d'Europe in 1953 and Paris-Nice in 1955. In retirement he became a journalist and was far more successful at it, writing for L'Equip and Le Monde. He also became head of sports reporting at Radio Luxembourg and, as such, will have been the voice that introduced two generations of British fans to the Tour de France since the station was for many years the only Tour news outlet available to them. Now in his 80s, he still appears on French television to comment on the race.

Evert Dolman
Evert "Eef" Dolman, born in Rotterdam on this day in 1946, was an Olympic gold medalist who won the 10km Time Trial at the 1964 Games and became World Road Race Champion two years later. He won the National Championship in 1967 and 1968, but was stripped of the earlier title after he was shown to have doped during the event. His last major victory was the Tour of Flanders in 1971.

Dolman was active during the years before and after Tom Simpson's death, the event which finally persuaded professional cycling that it needed to start listening to experts such as the Tour's official doctor Pierre Dumas who had been warning for several years that there was a real problem and that riders and the sport would suffer as a result. He described the years immediately after the British rider died on Mont Ventoux as "a witch hunt" with officials and police desperate to catch anyone so as to be seen to be doing something. He apparently regretted having doped himself, saying that he felt he had undermined his career by doing so. He died on the 12th of May in 1993 at the age of 47.

Matt White, born in Sydney on this day in 1974, won Stage 6 at the 1999 Tour de Suisse and Stage 4 at the 2005 Tour Down Under, also achieving podium finishes at many Australian and European one-day races earlier in his career. He was scheduled to ride the Tour de France with Cofidis in 2004, but broke his collarbone just a few hours before the race started and had to wait until 2005 to make his Tour debut. Having shown managerial talent in 2004 when he coached his wife towards a bronze medal at the 2004 Olympics, he was employed by Slipstream-Chipotle after his retirement, remaining with them as a manager through the transformation into Garmin-Cervélo. However, in 2011 it was discovered that he had referred Garmin rider Trent Lowe to US Postal's Dr. Luis Garcia del Moral, a man whose name has been mentioned in several doping cases, for a VO2 test in 2009,; thus breaking the team's anti-doping and medical rules which are known to be among the strictest in the sport. Following an investigation that revealed no evidence that Lowe had doped, White was sacked from the team.