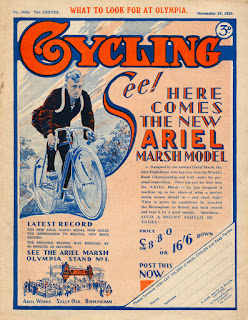 Dave Marsh, born on this day in 1894, competed in the 1920 and 1924 Olympics and won the World Amateur Road Race in 1922 when the event was held in Liverpool - British riders also took the silver and bronze medals, thus making it perhaps Britain's most successful day in the history of the competition with the possible exception of 1967 when Graham Webb won the men's competition on the same day that the legendary Beryl Burton won the women's.

Around 1929, the famous Ariel bike manufacturer (inventors of the wire-spoked wheel in 1870, the company was established by William Hillman and James Starley - whose nephew John Kemp Starley invented the Rover Safety Bicycle, a bike with two equal-sized wheels and chain drive that is the ancestor of almost all modern bikes) decided it needed to move into the competition market and approached Marsh for help. Under his direction, the Marsh Model was produced in time for the annual Cycle and Motor Cycle Show with the company using Marsh's fame to advertise the new bike - using one of the bikes, Marsh had beaten the Birmingham-Bristol-Birmingham record by a full 30 minutes and 38 seconds. The bike's spec - 20" frame, lightened fork crown, Bluemel mudguards, lightened lugs, brazed-on fittings, Pelissier brakes, butted tubes, "D to round" forks, grease-gun nipples, Endrick chromium-plated rims, Marsh handlebars on adjustable stem - still sounds impressive to modern ears. The price? £8 and 8 shillings, now £8.40 (€10.03/US$13.40).

Tomasz Stankiewicz was born on this day in 1902 in Poland, then part of the Russian Empire, and won a silver medal in the 1924 Olympics Team Pursuit. He was murdered by the Nazis on June the 21st, 1940 in Palmiry - part of the notorious "AB Action" that saw the mass execution of Jews and Polish intellectuals, athletes and politicians in the village and surrounding forest between 1939 and 1943. 2,115 victims have been exhumed and reburied correctly, but it is considered likely that many more skeletons lie undiscovered.

Trevor Bull, British pursuit and sprint rider and a bronze medalist in the 1966 Commonwealth Games, was born on this day in 1944. After retiring, he teamed up with Mick Bennett, a fellow Olympian who won bronze in the 1972 and 1976 Games, to run a successful bike company. Bull died on the 4th of April 2009.

Welsh rider Craig Cooke, who came 2nd in the 2004 Welsh National Cyclo Cross Championships and is the younger brother of multiple World and National Champion Nicole, was born on this day in 1984.

Hernán Llerena, often called the greatest ever Peruvian cyclist, was born today in 1928. He was National Champion three times, won four gold medals in the 1947 Bolivarian Games and came third in the 1951 Pan American Games. He died on the 14th of March 2010, aged 81.

Arthur Eddington, astrophysicist and scientific philosopher, was born on this day in 1882. Whilst not known as a cyclist himself, Eddington invented the Eddington Number which provides a means of quantifying a cyclist's long distance ride achievement usually expressed as a figure for E. As an example, a cyclist whose E Number is 85 will have ridden more than 85 miles on 85 occasions. Raising the value of E becomes increasingly more difficult the higher the value climbs, because whereas a cyclist for whom E=25 will need to only ride more than 25 miles to increase it, a rider for whom E=85 will need to ride more than 85 miles to increase her E Number. He also has a crater on the moon and an asteroid named after him - there aren't many people who can claim that.