Dutch mountain biker and cyclo cross rider Gerben de Knegt was born on this day in 1975. He has been National Cyclo Cross Champion twice, in 2002 and 2006, and rides for Rabobank.

Laura Van Gilder was born on this day in 1964. She rides cyclo cross for Twenty-Twenty C3 and road for the Mellow Mushroom team.

Jobie Dajka
Today would have been the birthday of Jobie Dajka, an Australian track cyclist who was on of four cyclists accused of being the co-owners of 13 phials of an equine growth hormone, injectable vitamins and medical equipment, including used syringes, by sprint and keirin champion Mark French. The drugs and equipment had been found in a boarding room used by French at the Australian Institute of Sport. he was born in 1981.


Yevheniya Vysotska (also spelled Evgenia and various other ways, as tends to be the case when Cyrillic letters are transliterated into the Latin alphabet), born on this day in 1975, won the Ukrainian National Individual Time Trial Championship in 2009 and the National Hill Climb Time Trial and Hill Climb Road Race in 2010. She was 4th overall in the 2011 Golan race in Syria.

László Bodrogi
László Bodrogi, born in Budapest on this day in 1976, had already achieved a successful career in Hungary when his father - a doctor and his manager - got a job in France and relocated his family, thus shifting the young László from a cycling backwater to the very heart of the sport. Further success in French races won him a place with VC Vaux-en-Velin, an amateur club that served as a feeder team for Festina, but nothing came of it after the doping scandal of 1998 that almost killed the team for good.

In the end, he had to wait until 2000 and interest from Mapei-QuickStep for a professional contract and won a bronze medal in the World Time Trial Championships the same year. Two years later he won the National Time Trial Championship and the Eddy Merckx GP, then came second at the Tour of Flanders, and in 2003 took the National Road Race Championship. He subsequently won the Road title in 2004 and 2006 and the TT title again in 2006, 2007 and 2008 - the last time because later that year he took French citizenship.

In 2005 he won the Tour de Luxembourg and competed for the first time in the Tour de France - he came 119th, but was the first Hungarian in the history of the race. At the time of writing, he is still a professional and rides for Team Type 1-Sanofi Aventis.


Lucien Teisseire, born in Saint-Laurent-du-Var on this day in 1919, won Paris-Tours in 1944, Stages 6 and 13 at the 1947 Tour de France, came 6th on the overal General Classification at the 1948 Tour, won Stage 4 the following year and Stage 20 in 1954 - the latter, when he was 35 and on the challenging mountain stage to Briançon was a surprise victory as all the rest were flat stages. He also won the Critérium du Dauphiné in 1953 and a bronze medal at the 1948 World Championships.

Happy birthday to Benjamin Day, the Pegasus Sports rider born in 1978. His best results to date were an overall win at the 2010 Redlands Bicycle Classic and the National Time Trial Championship in 2003.

Compton Gonsalves
Compton Gonsalves was born on this day in 1926 in Georgetown, Guyana and later moved to Trinidad and Tobago, for whom he won a bronze medal at the Central American and Caribbean Games in 1946. The next year, he won five National titles, set two world records and formed a cycling club to bring new people into the sport.

Then, he moved to England where he found work in London and didn't cycle for ten months. Somehow, he found his way onto the Olympic team but, due to those ten months, only came 16th out of a field of 21 in the 1km Individual Sprint - a race that two years previously he'd have most likely won easily. In 1951, the Trinidad and Tobago Federation came into being and was affiliated to the UCI, meaning that Gonsalves could compete for the nation in UCI-sanctioned races. Having moved back, he won a silver and another bronze at the Central American and Caribbean Games that year before announcing his retirement and forming another cycling club. In later years he moved again, this time to Canada; and as of 2010 an annual Compton Gonsalves All Star Invitational 300 Metre Sprint Power race has been held in Trinidad.

Arthur Metcalfe
Arthur Metcalfe was a British cyclist born in 1938 who died on this day in 2002. Like many cyclists, he was described by those who knew him during his childhood as having been rather weak and sickly. However, on his second day as a member of the Hartlepool CC, he entered a 40km time trial and left for dust several riders far more experienced than himself. 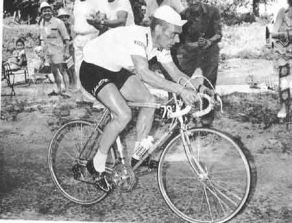 Having completed his mandatory military service, Metcalfe returned to cycling and entered the 1962 Tour  of Britain, coming 23rd overall. His small build allowed him to excel on the hills and solo attacks became his trademark, earning him the nickname "Snake" for his habit of wriggling away from the pack. He raced the Tour of Brtain again in 1964 and wore the leader's jersey - in those days yellow - for most of the race, finishing in first place. The following season was his best with 23 major victories, including the Manx Trophy. Even getting to the Isle of Man was quite a feat: lacking the money to hire a van to get his bike there and back, he rode from his home in Leeds to Liverpool (116km) and spent a night sleeping in a phone box before catching the ferry to the island.

In 1966 he became the first rider to win both the National Amateur Road Championship and the Best British All-Rounder titles in the same year. He'd entered the All-Rounder competition on a whim: "I remember thinking I needed a change. I'd ridden a few time trials in the past and so I thought I'd have another go," he later said.

Metcalfe turned professional in 1967 and, using up his entire annual holiday quota at work, rode the Tour de France with Tom Simpson. Permitted two mornings each week by his employer - Carlton Cycles - in which to train, he was woefully unprepared for the strain of a Grand Tour, yet completed it in 69th place. In 1968, he led the peloton for a while in Stage 10 and was awarded the Combativity prize for the stage.

His professional career was brought to a premature end by a broken pelvis in 1971, at which point he went into business with another professional cyclist named Wes Mason and set up a frame-building form named MKM which would be awarded the British rights to build Jacques Anquetil-branded bikes. Once recovered, he was reinstated as an amateur and began racing again, at one point receiving a ban after taking part in an event in South Africa - he remained angry about it for the rest of his life, saying that he had coached young cyclists while there and feeling that he should have been rewarded for this good service rather than punished for the race. Once the ban had expired, he set time trial records over 100 miles and 12 hours that remained unbeaten at the time of his death.

In later life, Metcalfe and his wife decided to relocate to France. However, it was not to happen - he died aged 64, a few months before they had been due to leave. Metcalfe, like many ex-professionals if his age, believed that the modern Tour de France is too easy and that it should be increased to what he termed its "proper length" - 2,500 miles (4023km).

"The philosophy of the Tour is that it's an epic of courage," he said. "We had stages of 233km. Sure, they go 2mph faster now, but you'd expect that. And there are 70 more riders. I was working for Carlton Cycles. British riders are all full-time pros now and they're better than ever we were, so they can ride further. The argument is that they want a clean Tour. But you can ride 2,500 miles clean. The race may go 1mph slower but from the roadside you'd never notice it. You can't see a difference that small."


Franco Ballerini
Franco Ballerini, born on this day in 1964 in Florence, first found fame as a cyclist before becoming a cycling team manager. Born in Florence, his greatest success came in the Classics - he won Paris-Roubaix, the single-day race so hard it's known as commonly by its nicknames "The Hell Of The North" and "A Sunday In Hell" as often as by its real name, on two occasions, first in 1995 and then again in 1998. He also won Paris-Brussels in 1990, the Giro della Romagna in 1991, the Omloop Het Nieuwsblad in 1995 and the Grand Prix de Wallonie in 1996.

Ballerini loved rally racing as much as he loved cycling, and it was while participating in that sport that he met his untimely end when he was 45. He was acting as navigator for a driver named Alessandro Ciardi during a race at Larciano when the car went out of control and crashed, leaving him with the horrific injuries that caused his death on the 7th of February 2010.