Giorgia Bronzini retained her Elite Women's World Champion title with a superb win in Copenhagen today. Marianne Vos, taking second place for a fifth time since she won in 2007, was beaten by the diameter of Bronzini's front wheel - but with World Cyclocross gold, first place victories in the Giro Donne, Holland Ladies' Tour and various other races this season she didn't look so disappointed for long; returning to her usual affable and gracious self on the podium.

Perhaps the real star of the race, meanwhile, was Canada's Clara Hughes who turns 39 years old in three days' time. With 30km to go, Hughes mounted what can only be described as a Merckxian solo breakaway, at one point achieving an advantage of 43 seconds over the chasing pack and in doing so silenced the commentators who had been muttering to the effect that it had hitherto been a boring race.

Germany's Ina-Yoko Teutenberg gave a characteristically strong and spirited performance for a well-deserved third while Welsh rider Nicole Cooke took fourth, a feat hopefully received as an easy-to-decode message by those large sections of the cycling media that wrote her off following a series of disappointing results in the wake of illness.

The riders used the aftermath of the race to highlight the shocking fact that, unlike their male counterparts, they do not receive a guaranteed minimum wage following a pre-race comment by UCI boss Pat McQuaid in which he claimed women's cycling is "not developed enough" for riders to deserve a guaranteed salary.

Andrew Hood, reporting for VeloNews, spoke to a few of them. Teutenberg said: "I think it’s total bullshit. We’ve seen over the last couple of years, it’s getting harder and harder, you cannot come to a race to win if you’re not fit. The women deserve it - I don’t know why the men get this guarantee with a contract and the women don’t. We deserve equal rights. We are living in the 21st century."

Marianne Vos is no less angry about it, even though as one of the top cyclists in the world today she can earn as much as 80,000 euros in a season: "We do a lot for the sport as well," says the 24-year-old who, as a very vocal advocate for increased anti-doping measures, does more for cycling than many others both male and female. "The women’s cycling is becoming more professional, why should there be a difference between men and women?”

Hood revealed that while the professional men are guaranteed a salary of at least 30,000 euros per season and the more enlightened teams pay their female riders fairly, some of the women are paid as little as 6,000 while a journalist he doesn't name says that some don't receive any salary at all. That is, quite simply, disgusting - never mind that while such a situation is in place women's cycling will always be considered secondary to men's, it's also plainly, simply and fundamentally wrong and the UCI need to put it right immediately. They fought long and hard to get rid of doping, now it's time to do the same with institutionalised sexism. 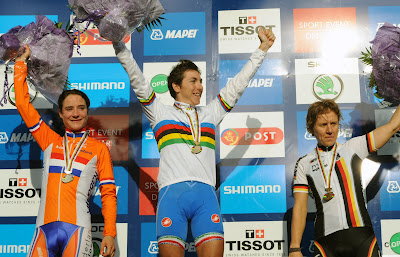 One final note while we're on the politics side of the sport - a message to all those commentators who claimed the race was boring: if you don't enjoy women's racing, and some of you very clearly do not, resign. You're eminently unsuitable for the job and while people such as yourselves are doing your utmost to put off potential fans, you remain one of the major reasons that women's cycling doesn't get the exposure it deserves.