On this day in 1892, 33 amateur cyclists met in the Belgian city of Liege and embarked on a race organised by the local cycling union and the Pesant Club Liègois. The event was financed by L'Expresse, a newspaper then published in French-speaking Belgium and Northern France, and by their request the race stayed within Wallonia. The winner, Léon Houa, took 10h48'36" to complete the 250km parcours and the last of the seventeen riders to finish crossed the finish line five hours and eighteen minutes later. Few would ever have believed that in 2012 the race would still be going; often called La Doyenne, it is Liège-Bastogne-Liège, the oldest, most venerable and, for many, the most prestigious of the five Monument one-day races.

Liège-Bastogne-Liège has fallen on this date on two other occasions, 1921 and 1930, but as it's now held from mid to late April so as to fit in with the other Classics (the so-called Northern Classics all take place within weeks of one another), it will never again be held on this date. 1921 was the 11th edition as the race was not held for a period of fourteen years from 1894 and stopped again during the First World War. The parcours covered 209km and was won for the first of two consecutive years by Louis Mottiat, who would win four stages at the Tour de France that same year. The 20th edition, taking place in 1930, was won for the first time by a German, Hermann Buse -  German fans would have to wait almost half a century until 1979 for another victory.

Hubert Opperman
Born in Victoria, Australia on this day in 1904, Hubert Opperman was the son of British-German immigrants who made a living from any sort of work that came their way. His father was variously employed as a butcher, a lumberjack, a coach driver and a miner and, whilst still a child, Hubert earned extra money driving a horse-drawn plough - and by delivering telegrams on a bicycle, which he turned out to be rather good at riding fast.

Aged 17, he entered his first race. Coming third didn't win him the prize he'd been hoping for - a Malvern Star racing bike - but it did bring him to the attention of Malvern Star proprietor Bruce Small, who sought the rider out after the race and offered him a sponsorship. Less than three years later he repaid the company with victory in the National Road Race Champion of 1924, and then again in 1926, 1927 and 1929.

In 1927, three newspapers - Australia's Melbourne Herald and Sporting Globe, alongside New Zealand's Sun - joined forces and started a fund to send an Australasian team to the Tour de France. Australian riders had first appeared at the Tour in 1914 but had not made much of an impact; now - in the brave new world between the First World War and the Great Depression, the nation saw sport as a means to increase its profile on the international stage. By 1928, enough money had been raised and Opperman, accompanied by Harry Watson of New Zealand and Australians Ernie Bainbridge and Percy Osborne, was on his way to France. Journalist René de Latour noted what he called "a marked contrast" between the attitudes of Opperman and the other men: whilst to them it was " a trip in which to collect a few souvenirs to take home, to the eager Oppy it was a wonderful chance to reach the top in international competition." Nevertheless, the Europeans failed to recognise that a serious, if yet not fully-formed, talent had arrived in their midst. "Whom did he beat over there, anyway?" they asked one another. "Let's see him on the road, then we'll know. We've yet to see any classy Australian road rider."

Opperman had been to Europe before, in 1928 when he took part in the Bol d'Or 24-hour classic racing behind tandem pacers (and had won on a borrowed utility bike after persons unknown sabotaged his chain), and he realised that the team would now be competing against rivals performing on a far higher level that those they had faced at home; so he applied for a place for the team on a Vélo Club Levallois training camp run by rider-turned-coach Paul Ruinart. They were accepted and, after a few weeks, were entered into their first European race - the now defunct Paris-Rennes. 32 riders took part, among them some of the finest of the day including Nicolas Frantz (who, the previous year, had won the Tour de France) and Gaston Rebry (who had won Paris-Nantes and would later add an impressive selection of Tour stages), meeting at a cafe in Paris at midnight before riding away into a night full of rain and hailstorms when the race started at 2am. Frantz won, Eugène Archambault was second and Rebry third - but Opperman proved he had the ability to make a name in European racing when he finished in eighth place. At Paris-Brussels shortly afterwards, he cam third behind Georges Ronsse and Frantz.
The Tour was to start one month later; however, despite Opperman's success, the team entered with a serious deficit in numbers - while other teams consisted of ten men, the Australasian's plan to recruit six European riders had come to nothing and they still had only four. To make things worse, the aging Bainbridge was far slower than he had once been and tended to be the first man in the autobus, generally after no more than 70km or so. Time and time again, they were defeated by stronger squads. Help came from an unexpected source. Perhaps Ludo Feuillet, manager of the mighty Alcyon team, saw potential in Opperman and wanted to make friends so that he'd be able to poach him for his own team in the future or perhaps he just felt sorry for the Australian who was putting in so much effort only to be soundly defeated day after day - no matter; he took him under his wing and ave him advice on tactics, equipment and so on, and was largely responsible for him finishing in 18th place overall.

Oppy, as he was becoming known, never did win a Tour de France, though he improved his result to 12th place in 1931. Meanwhile, he did well in other French events such as Paris-Brest-Paris that same year, which he won against Frantz and Maurice Dewaele (who had won Oppy's first Tour) and, in time, was adopted as a national hero. Still with Malvern Star, which acted as sales agent for the British manufacturer BSA, he came to Britain during the time when road racing was still banned by the National Cycling Union. Setting new records - provided the rider wore dark, normal clothing rather than anything that might give away the fact that he or she was up to anything that might be deemed competitive upon the King's highway - meanwhile, was not; and he set a new record for Land's End to John o'Groats, then the 1000 Miles, then London-York and the 12 Hours. 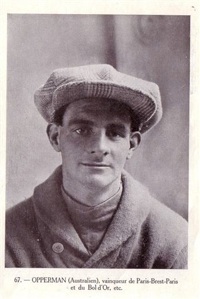 Back in Australia five years later, he broke no fewer than 100 records during a single 24-hour race before signing up to the Royal Australian Air Force. He would end the War as a flight lieutenant, one step down from squadron leader, but as was the case with so many riders of the day the conflict took away many years during which he might still have been winning races. He returned to competition in 1945, but now in his forties he was simply unable to perform as he once had and retired in 1947.

After his racing career was over, Opperman realised that he could still serve his nation by putting his fame to good use and getting elected into government. Though an ardent Socialist, the Labor Party's doctrines were too close to Communism for his tastes and so instead he joined the Liberal Party, where he would eventually become a parliamentary whip. Among his many accomplishments, perhaps the most honourable were his efforts to relax Australia's notoriously strict (and, to our modern eyes, shockingly racist) laws barring entry to immigrants of mixed ethnicity and he received well-deserved recognition for his humane views, becoming an Officer of the Order of the British Empire in 1953 and, fifteen years later, a Knight Bachelor; yet was never so pleased as he was when half a million French fans voted for him as L'Auto's Sportsman of the Year. He continued to ride his bike every day until the age of 90, when his wife Mavys persuaded him to stop for fear that he might not survive an accident, and died on his stationary bike on the 18th of April in 1996.

Greg Ball
Paracyclist Gregory Ball, born in Ipswitch, Queensland on this day in 1974, broke the 1km Time Trial World Record during his first year competing for Australia, then took a gold medal for the Team Sprint at the 2000 Paralympic Games. Two years later he won the 1km TT at the World Championships, then went on to even greater Paralympics success with gold for the 1km TT and the Team Sprint.

In 2011, Ball set a new 1km TT World Record - and failed a voluntary anti-doping test afterwards. He still claims that the drug that was discovered in his sample - anabolic steroid stanozolol, the same drug that saw Ben Johnson stripped of his gold medal at the 1988 Olympics - got there through "an honest mistake," most likely the pills given to him by a friend and which he says he assumed were vitamins that he believed would help him to cope with depression.

There are those who say that he must be innocent, because why else would he have voluntarily submitted himself to a test? We need to bear in mind, of course, that had he have refused the test when it was suggested, his achievement would immediately have been called into doubt. Finally, what athlete, in 2011, would willingly swallow any pill without knowing first of all what it was and secondly that he or she could trust the person giving it to them? The Australian Sports Anti-Doping Authority apparently thought along the same lines and, on the 26th of October 2011, upheld Cycling Australia's decision to ban him from competition for two years. He will also have to repay Aus$27,500 granted to him by the Australian Sports Commission and will not attend the 2012 Paralympics - at the age of 37, his racing days are almost certainly over; a sad end to the career of a man who seemed to be an inspirational athlete.