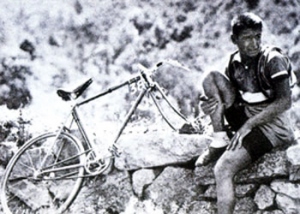 Feeling sorry for him? Let's delve a little deeper. The famous photograph shows poor Vietto all alone in the world as he waits for a new wheel, but in fact the photographer had realised that he would have a sensational image if he cropped out the apparently quite sizable crowd who had gathered around the stricken rider and were taking care of him (it remains, however, one of the sport's most iconic images, commonly used to illustrate the glorious pain and hardship of the Tour). Secondly, while Magne was grateful for his team mate's actions, Vietto was far from magnanimous - he verbally attacked his leader and told him he was a bad rider when he tried to thank him. Magne continued to express thanks for the rest of his life, but Vietto became bitter and ended his life living as a recluse on a pig farm. Magne was also not permitted to ride the victory lap to which he was fully entitled when he won in Paris, where the crowd waved banners declaring Vietto to be "the moral winner of the Tour."

Worse still, Vietto allowed the event to turn him into a bully. Tour legend has it - without proof, since none of the people involved are still alive - that when he lost a toe to an infection, he demanded that his domestique Apo Lazaridès chopped off one of his own toes too. "But why? I don't need to," the Greek rider protested. "Because I say so," Vietto replied. Lazaridès, whilst perhaps not the most intelligent rider in cycling history, was not lacking in bravery - he had risked death at the hands of the Nazis when he used his bike to transport supplies through the mountains to the Resistance during the Occupation of France, so the toe came off and he walked with a limp until the 30th of October 1988, the day he died. The legend says that Magne's toe is kept in a jar filled with formaldehyde (or absinthe, in some versions) in a bar in Marseilles - but nobody seems to know which bar, and several attempts to track it down have been unsuccessful.

Whatever else he may have been, Vietto was a talented rider and wore the yellow jersey for a total of 29 stages either side of the Second World War - a record among riders who never won a Tour. He won the Mountains classification and Stages 7, 9, 11 and 18 in 1934, Stages 6 and 9 in 1935 and Stages 2 and 9 in 1947. His memorial is located on Col de Braus in the Alpes-Maritimes department where he was born and closely resembled those erected in memory of Tom Simpson in Haworth (where he was born) and on Mont Ventoux (where he died).


Bernhard Eisel
Bernhard Eisel, born in the Austrian town of Voitsberg on this day in 1981, is best known as part of the Cavendish-Eisel double act in which he leads the Manx rider out from the peloton, providing him with clear space in which to launch the devastating sprint to the line that has seen him become Great Britain's most successful rider in Tour de France history and supporting him through the mountains and long flat stages.

With the demise of the HTC-Highroad team due to sponsorship problems at the end of the 2011 season, it was announced that Eisel would be going to Team Sky with Cavendish for 2012; however, he was afforded several opportunities to chase victory for himself and enjoyed a successful year with third place at the E3 Harelbeke, two top twenty stage finishes at the Tour de France (best: 15th, Stage 6) and second place at the Schwaz Criterium. Cavendish left Sky at the end of the year while Eisel stayed on; in 2013 he was fifth at the Tour of Qatar.

Timothy Gudsell became New Zealand National Scratch Race Champion in 2003 and won three gold medals at the Oceania Games in 2005. He was due to make his first Grand Tour appearance at the 2007 Giro d'Italia but was unable to compete due to injuries sustained in a crash. He was born on this day in 1984 in Fielding.

On this day in 2011, the Spanish Meat Production Association issued a press release strongly denying any possibility that Alberto Contador could have consumed the drug Clenbuterol - used illegally to promote the growth of lean muscle in livestock destined for food production - in contaminated Spanish meat. He had been cleared due to the impossibility of proving his claim was false by the Spanish Cycling Federation two days previously; but in 2012, following a lengthy investigation, was handed a back-dated two year ban and stripped of all results gained during that period.