On this day in 1896, during an interview with the New York World newspaper, the civil rights leader and suffragist Susan B. Anthony said the words that have become the most famous of the quotations attributed to her and one of the most famous to mention bicycles...


"Let me tell you what I think of bicycling. I think it has done more to emancipate women than anything else in the world. It gives women a feeling of freedom and self-reliance. I stand and rejoice every time I see a woman ride by on a wheel... the picture of free, untrammeled womanhood."


Edith Atkins
Edith Atkins, born on this day in 1920 in Bilston, Great Britain, became famous for setting numerous long-distance cycling records during the 1950s. She had competed at international level in gymnastics during childhood, aided by her diminutive size (even in adulthood, she was less than than 1.52m tall) but, like many female cyclists of her day, she found her way into cycling by chance when her mother gave her a bike won while playing the card game whist. She discovered her racing potential when she was loaned a better bike by local cyclist Roland Atkins, whom she would later marry - though only after he admitted she was faster than him.

Atkins seems to have joined the Coventry Meteors club some time in the middle of the 1930s, then became part of the Coventry Road Club in 1938. Racing was limited by the Second World War and she didn't begin competing until 1946. Very soon, she found herself with a rival - Eileen Sheridan, a professional with the Hercules company that would later supply bikes for Britain's first Tour de France team and, in the 1950s, sponsored team member Brian Robinson who would become the first Briton to both finish a Tour and win a stage. Atkins, meanwhile, could not find a sponsor and even went so far as to remortgage her home so she could continue racing. Sheridan was sponsored to set records, so Atkins reasoned that the best way to attract a sponsor of her own was to break those records.

Atkins continued setting records for many more years and became as acclaimed as one of the finest cyclists Britain has produced of either gender. She continued cycling for the rest of her life, still riding a minimum of 160km each week when she was 76 years old - the same year she entered 40 races. Three years later, she was hit by a car and killed as she wheeled her bike over the A45 road near Ryton-on-Dunsmore in Warwickshire.


Sandy Casar
Sandy Casar, a French cyclist who spent the entirety of his thirteen years as a professional cyclist with the FDJ team, was born on this day in 1979 in Mantes-la-Jolie. He won the Route du Sud, one stage at the Tour de Suisse and two at the Tour de France outright, in addition to becoming winner of Stage 16 in the 2009 Tour after coming second behind Mikel Astarloza who was subsequently disqualified after a test carried out before the beginning of the race revealed traces of EPO. He retired in 2013.

Though known primarily as a breakaway rider, in that same stage - which included an ascent of that year's highest mountain Col du Grand-Saint-Bernard - he beat Alberto Contador, both the Schleck brothers and a number of other respected climbers. He also finished the 2003 Giro d'Italia in 13th place overall, beating the great Marco Pantani. However, he is likely to be remembered for the Stage 16 victory, which without Astarloza's cheating he still would have finished in a respectable second place despite colliding with a dog. The dog was unhurt. 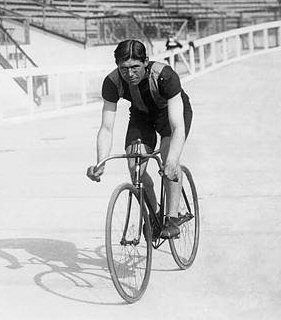 Leon Meredith was born on this day in 1882 in St. Pancras, London, and records of his cycling career can be difficult to pin down as official documents show his name as having been Lewis Leon Meredith, contemporary reports call him Leon Lewis Meredith, other sources insist he was Leonard Lewis Meredith and those who knew him called him Jack. In appearance, he was what we now term a nerd - years later, Cycling magazine described him:


There was something Clark Kent, the children's comic-book hero, in the make-up of Edwardian cyclist Meredith. Like Clark Kent he presented a mild, shy, bespectacled image off the bike, but once on the bike he became Superman, beating all and sundry in a devastating manner.

Meredith developed an interest in cycling when he was 13 years old and decided he'd ride from London to Brighton. Along the way, he met a group of riders from the Paddington Cycling Club who, concerned that a lad of his age would not be able to complete the 80km on the poor roads of the day and might get into difficulties without any means to summon assistance, invited him to ride with them. He agreed after they'd promised not to go too fast and leave him behind. A few miles up the road, they had to ask him to slow down so they could keep up.

Naturally, they asked him to join their club, based in a neighbouring London borough to his home. They encouraged him to race and he won the first one he entered. He won the first of his seven World Championships, the 100km motor-paced race, in 1904 at Crystal Palace and did so in style: after 80km, his pace motorbike broke down and he was forced to veer up the banking and into the wall, crashing hard and turning multiple somersaults as he fell. When he stopped, blood pouring, he leapt to his feet and called for the team to bring him a replacement bike and a new motorpacer, then continued and won the race - beating the world record of the time by more than seven minutes. He was 16.

Unusually for a rider so talented on the track, Meredith was also highly respected on the road and set a number of time trial records, including becoming the first rider to complete 100 miles in under five hours which rather suggests that Britain could have had a stage winner at the Tour de France decades before Brian Robinson managed it. he was also a canny businessman, acquiring the patent rights to a revolutionary tubular tyre with diagonal threads that allowed access to the inner tube without the need to cut the stitching. Building on that success, he became managing director of a bike parts company and began importing high-end bikes from Europe, pioneered the development of lightweight alloy components and building the the firm up into one of the largest bicycle companies in Europe. Sadly it would fail and vanish in the 1960s, many years after his death. The company made him so wealthy that, when he was selected for what would have been the third of his four Olympics in 1916 (he'd raced in 1908 and won gold, 1912 when he won silver and would do so again in 1920) it was decided that he would compete at his own expense (the Games that year would be cancelled due to war).

He died on the 27th of January 1930,  less than a week before his 48th birthday of a heart attack while skiing in Switzerland.


Gilbert Desmet was born on this day in 1931 in the Flemish city of Roeselare. He should not be confused with another Belgian cyclist with the same name, born in 1936. The older Desmet, professional for fifteen years, never won a Grand Tour and has thus been largely forgotten, but wore the maillot jaune for two days in the 1956 Tour de France and then for nine days in 1963, as well as coming 4th overall in 1962. He also won Paris-Tours in 1958 and La Flèche Wallonne in 1964, in addition to around 100 other victories.