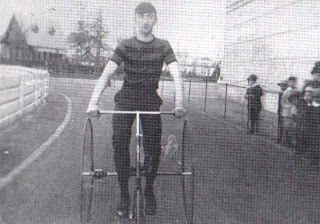 Emile De Beukelaer, who died on this day in 1922, was the most successful professional cyclist of the 1880s and later founded, then became the first president of, the Union Cycliste Internationale. Based first in Paris, later in Geneva and now in Aigle, the UCI remains the governing and regulatory body of cycling sports worldwide to this day and was created on the 14th of April 1900 to oppose the British-based International Cycling Association after an extended row over whether or not Britain should be limited to one team to represent Great Britain in international events or be permitted four to represent England, Scotland, Wales and Ireland, it having in the past sent four teams to the Olympics before claiming all medals won in the name of Great Britain. Belgium, Switzerland, Italy and the USA, the most powerful cycling nations of the day, joined forces with the French to create the new body and as a result the ICA had little chance of retaining any real power; Britain was subsequently banned from joining until 1903.

Rob Hayles, a British track and road cyclist, was born on this day in 1973.  He received a 14-day suspension from racing in 2008, the same year he became National Road Race Champion, after a blood test found his haematocrit level to be 0.3% over the legal limit, though no decisive evidence of doping was discovered. Hayles won silver and bronze in the 2004 Athens Olympics, bronze in the 2000 Sydney Olympics, gold and silver at the 2006 Commonwealth Games and won a total of two gold, five silver and one bronze in the Track World Championships before retiring in 2011.