Christopher Scott
Christopher Scott was born in Queensland on this day in 1968. His parents encouraged him to take part in sports when he was a child and he first chose soccer, joining his older brother's team after the coach of a team made up of players in his own age group refused to let him join because he was unable to kick the ball as accurately with both feet.

"I'd love to be able to get in touch with him now and show him what I have been able to achieve," Scott says. It is to be hoped that, wherever he is now, that coach did in fact later hear of what the lad he turned down achieved, because the fact that no other player on the team had been required to meet the same stipulation suggests that the real reason Scott was refused a place with them was because he has cerebral palsy - and what he achieved is truly remarkable, even by Paralympic standards: having competed in 7-a-side soccer at the 1988 Games he switched to athletics for the 1992 Games, then - having taken up cycling after breaking an ankle - won a gold medal for the 5,000m Time Trial and a silver for the 20km CP Div4 race in 1996 and a gold for the CP Div4 Time Trial and a bronze for the Road Race in 2000. In 2004 he was team captain but gave up his own chances of winning in order that Peter Homann, whom Scott judged to have a better chance of winning the gold in the Sprint, could go through; Homann won and Scott was later awarded a gold medal too for the part he played in the victory. "I already had my gold medal," Scott - who won two more for the road Time Trial and the Individual Pursuit at the Games that year - said, "It's what you do in a team. Peter deserved his chance on the podium."

In 2007, Scott underwent surgery on his spine and then, during recovery, was hit by a car. Nevertheless, he competed at the 2008 Paralympics and won bronze in the Kilo, silver in the Individual Time Trial and gold in the Pursuit before announcing his retirement.

Maurice Blomme, born in Oostnieuwkerke, Belgium in this day in 1926, came third in the Junior National Championships of 1946, then won the National Military Road Race Championship and was second in the Pursuit at the Amateur National Track Championships a year later. In 1949 he turned professional with Bianchi-Ursus and Bertin-Wolber, taking third place at the GP des Nations that year; then in 1950 he achieved first (Stage 12), second and third stage finishes at his debut Tour de France, but did not finish the race. He won the GP des Nations that year and was second at Kuurne-Brussels-Kuurne the next, was second at Gent-Wevelgem (also on Stage 1 at the Tour and overall at the GP des Nations) in 1952 and won the Omloop het van Westen in 1955; continuing to win criteriums through to the end of his professional career in 1959. 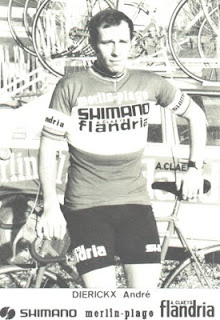 Born in Oudenaarde, Belgium on this day in 1946, André Dierickx turned professional with Goldor-Gerka in 1968 and won the Under-23 Ronde van Vlaanderen, then in 1970 came third at the Omloop Het Nieuwsblad and Amstel Gold Race. 1971 was his breakthrough year with two stage wins at the Critérium du Dauphiné and General Classification victories at the Tours of Luxembourg and Picardie; then in 1972 he was second at the Omloop Het Nieuwsblad, the Ronde van Vlaanderen and Paris-Roubaix as well as riding in - but failing to finish - his first Tour de France. In 1973 he won La Flèche Wallonne and in 1974 finished the Tour, taking seventh place on Stage 14 and 55th overall; in 1975 he won La Flèche Wallonne again and was third at Paris-Roubaix. He was second at Liège-Bastogne-Liège in 1977 and won the Ronde van België in 1978, then went back to the Tour de France in 1979 and finished Stage 9 in fourth place before abandoning after Stage 15, then finished off his career by winning the GP Briek Schotte in 1981. Dierickx also excelled in the one-day, "round the houses" criteriums that both fuel and are fueled by  Flanders' love for cycling, winning around 80 during his career and reaching the podium on many more occasions.

Jan Pieterse, born in Oude-Tonge on this day in 1942, rode with the victorious Dutch 100km Team Time Trial squad at the 1964 Olympics. He had won the Österreich-Rundfahrt the previous year, but never enjoyed the same success on the road - and consequently, the fame - as his Olympic team mates Evert Dolman, Bart Zoet and Gerben Karstens.