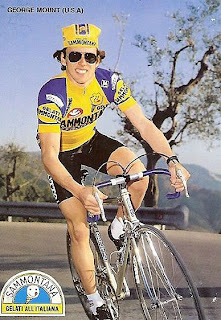 Mount retired at the age of just 28, having won around 200 races - he felt that he could have continued racing for at least another five years but that if he did, he'd end up as a burned-out ex-pro earning peanuts in a bike shop; he thought it better to get some qualifications while he was still young and guarantee himself a better future. His legacy is greater even than his palmares - he had blazed the trail later followed by Greg Lemond, who would become the first non-European to win the Tour de France, Levi Leipheimer, George Hincapie, Andrew Hampsten, Kristin Armstrong and all the other great North American cyclists to go to Europe and revolutionise professional cycling from the 1980s to the present, and it is thanks to him that by the end of the 20th Century cycling in the USA was as popular as it had been at the end of the 19th. His nickname was Smilin' George, and he has a lot to smile about.

Tom Veelers, born in Oostmarsum, Netherlands on this day in 1984, won the Under-23 Paris-Roubaix and Stages 5, 6, 8 and the General Classification at the Olympia's Tour in 2006. In 2011, he was second overall at the Tour de Wallonie-Picarde. Veelers began his professional career with Rabobank's Continental team in 2005, then switched to Skil-Shimano (now Argos-Shimano) in 2008; he has been with them ever since.