The Tour de France began on this day in 1963 - it had been 60 years since the first Tour but, as the race was not held for a total of ten years during World Wars 1 and 2, it was the 50th edition. There were 21 stages, two of which were split into a road race and a time trial, it covered 4,137km in total and 130 riders started. Organisers, fearing that a fourth victory for Jacques Anquetil would be considered boring by fans, especially after he dominated the race with what would be the fastest average speed until 1981 in the 1962 edition, reduced the time trials to 79km so that the mountain stages would contribute more towards an overall win so that a climber would have a better chance. For a while, it looked as though they needn't have bothered: Anquetil had picked up a tapeworm and his doctors advised him not to start, but a few days before the race was due to start he decided that he'd go ahead anyway. He had two main rivals, Raymond Poulidor and The Eagle of Toledo Federico Bahamontes.

There was one rather unusual team that year: IBAC-Molteni was formed from the two existing teams of those names, and half of them wore IBAC jerseys while the other half wore Molteni jerseys.

In the very first stage, just as Anquetil crashed and hurt his knee and elbow, Bahamontes escaped in a four-man break; since he was known as a climber and the stage was flat the peloton was not concerned. The Belgian Eddy Pauwels won the stage and got himself into the maillot jaune for the next two days, but the 1'28" advantage Bahamontes gained came as a big surprise and Anquetil admitted that he now saw him as his main rival. Rik van Looy, who was already in his eleventh year as a professional cyclist (but would remain one for another seven years),  won Stage 2a then the Pelforth-Sauvage took the Stage 2b team time trial before another successful break took Seamus Elliott to victory in Stage 3 - he then stayed in yellow until Stage 6a. He never had it again for the remainder of the race, but it didn't matter because he'd earned his place in history as the first Irishman to lead the Tour de France.

As expected, Anquetil won the Stage 6b time trial - they didn't call him Mr. Chrono for nothing, but he didn't win back enough time to stop Gilbert Desmet getting into yellow. Since Bahamontes was such a talented climber it was widely thought that as soon as the race reached the Pyrenees in Stage  10, he'd win a massive lead that might even prove sufficient to win the race. Anquetil, however, had guessed what the organisers were planning and spent the early part of the season entering as many hilly and mountainous races as he could, and as a result he was now a very different type of rider - Bahamontes lead a group through the 148km from Pau to Bagnères-de-Bigorre, but Anquetil kept up with him all the way and then still had the strength to beat them all in a sprint. It was the first mountain stage he had ever won, which put him into third overall and suddenly nothing in the race was certain.

Desmet was still in yellow, probably as much to his own surprise as anybody else's, because other than a couple of Classics wins (Kuurne-Brussels-Kuurne and Paris-Tours in 1958), he'd never shown much potential as a stage racer (he'd win La Flèche Wallonne in 1964, too), and he kept it all the way to the Alps in Stage 15 when Bahamontes decided to use the Grand Bois and Col de Porte to show the rest of the field how a real grimpeur gets a bike to the top of a mountain. He won the stage and moved into second place. Stage 16 took in 202km from Grenoble to Val d'Isère, a tough parcours that Bahamontes probably could have won; but he had bigger fish to fry and began working on improving his overall time, and moved into the lead, while Fernando Manzaneque - who had been sixth overall in the 1961 Tour and stood on the Vuelta a Espana podium a couple of times - won the stage.

Bahamontes would wear yellow for just one day, at least partially due to a little bit of cheating by St. Raphael-Gitane-Geminiani. In 1963, the old rule banning bike swaps except in the case of mechanical failure and/or irreparable damage still stood, but manager Raphaël Geminiani realised that if Anquetil was going to win he'd need a lighter bike fitted with gears more suited to the Alps. So, during Stage 17 he borrowed a cable cutter from a team mechanic and at the foot of the first climb when he was certain nobody would see him, he cut a brake cable as roughly as possible to make it look as though it'd snapped. Anquetil was therefore allowed to continue on the new bike that had been especially prepared and kept up with Bahamontes all the way. Towards the end of the stage, when it began to look like another sprint finish was on the cards, the mechanics had fixed the "broken" cable so he got his high-geared bike back again. He won the second mountain stage of his career and the maillot jaune. When he won the Stage 19 time trial, his fourth Tour victory was in the bag.

Bahamontes was second, 3'35" down, while José Pérez Francés of Ferrys was third with +10'14" and Desmet ended up fifth with +15'. Poulidor, whom so many had thought had a real chance of victory, was eighth with +16'46". Some time after the race, Anquetil and Geminiani admitted that they'd cheating and revealed how easy it had been to do so - the next year, the rule they'd circumvented was repealed.

Steve Joughin
A quarter of a century before Mark Cavendish there was Steve Joughin, an out-spoken compact Manx sprinter who became one of the best in the world and, just like Cav, spent much of his career trying to explain to fans why it was he would never win the Tour de France.

He was born on this day in 1959 and discovered his love for racing during childhood, joining the Manx Road Club. In 1977, he became Junior National Champion, then spent a few years picking up good results until 1980 when he went to France to try to make a career. However, France was not to his liking: young cyclists do not live well when they're still trying to make their name and the occasional criterium win here and there doesn't leave much money once bikes and kit are paid for. He was back in Britain within months.

Ten years earlier, he'd have ruined his chances of a professional career there and then; but during the late 1970s and early 1980s British racing was undergoing something of a renaissance and some of the top European names were making the trip across the Channel to race in British events. Joughin beat them regularly enough to get himself noticed and in 1983 he was recruited by the Moducel team, staying with them for four seasons. In 1986 he won two stages at the Tour of Britain and was offered a place with the Percy Bilton-Holdsworth team, then moved to Ever Ready-Ammaco for a year before going back to Percy Bilton from 1989 until 1991 when he spent his last season with KJC-Revelation.

Like many ex-professionals, Joughin found it extremely difficult to adjust to normal life when he retired, finding solace in alcohol. By 2005 he had become so ill that doctors were amazed he survived; then, using the sheer will power that all professional cyclists have, he saved himself and gave up drinking. Now living in Stoke-on-Trent, Joughin owns and runs the Pro-Vision sportswear company and works in a voluntary capacity for Alcoholics Anonymous. 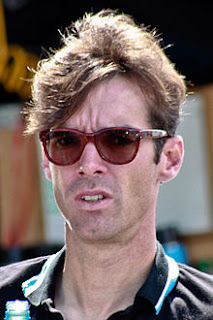 At 20:25 on this day in 2004, British cyclist David Millar was enjoying dinner in a Biarritz restaurant when three plain clothes officers from the anti-drugs squad approached him. He was arrested and the officers took his shoe laces, watch, keys, cellphone and other items before driving him back to his flat and beginning a search. Millar is still highly critical of their methods:


"They went in with a gun first, as if somebody was going to hit them with a back wheel or something. They sat me down and I wasn't allowed to move while they searched the house. They search while you're there. It took them four hours.

They humiliated me and were critiquing my lifestyle, using a classic good cop, bad cop thing. It was psychological warfare. The bad cop literally hated me. He was saying: 'You're not a good person - we know that.' He said: 'You take three paces and I will bring you down like you're resisting arrest.' It was deliberate. I felt completely violated."

Eventually, the police found what they were looking for - empty phials that had once contained EPO and two used syringes. Precisely where they were found is a bit of a mystery - some reports say that they were lying on top of a book, others that they were concealed within a hollowed-out book. Millar was then taken to Biarritz and locked in a cell. It would later turn out that they had targeted Millar after Philippe Gaumont, arrested six months previously, told them that the British rider had encouraged Cofidis team doctor Jean-Jacques Menuet to provide them and Cedric Vasseur with the drug, which increases red blood cell population.

Millar denied the claims, telling police that Gaumont was "a lunatic" and that he was "talking absolute crap." However, by this time his phone had been tapped for some four months and, when faced with damning evidence against him, he took the sensible option and made a full confession the next day. Under international cyclings sanctioned by the UCI, a confession is considered equal grounds for suspension as a positive test and he was banned for two years by the British Cycling Federation in August. He was stripped of his 2003 World Time Trial Championship, his 3rd place Critérium du Dauphiné Libéré finish also from 2003 and his Stage 1 and 6 wins at the 2001 Vuelta a Espana.

Today, Millar has become a spokesman for the peloton; he is widely considered to be one of the most honest men in cycling and is known for his intelligence, erudition and wit.