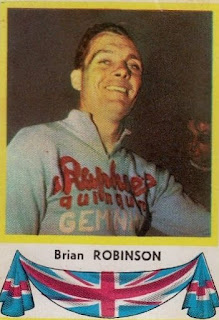 Today, British cyclists have made their mark forever on cycling's greatest race the Tour de France - Tom Simpson was the first to play the media and become a star, then became an even bigger star when he died on Mont Ventoux; Barry Hoban won eight stages; Robert Millar came fourth and won the King of the Mountains; David Millar earned time in all the different classification leaders' jerseys; Cav shattered Hoban's record with 23 stage wins, set a host of records, was declared the greatest sprinter the Tour had ever known and became a pin-up and then in 2012 Bradley Wiggins became the first British winner in the 109 year history of the race. Brian Robinson, born in Huddersfield on this day in 1930, wasn't the first Briton to enter the race (that had been Charles Holland and Bill Burls, who took part and failed to finish when Robinson was six years old in 1937) but he was the first to become a true Tour rider and the first to finish the race; in so doing blazing a trail that all those who came after him would follow.

Robinson was born into a cycling family, his father and older brother being members of the Huddersfield Road Club. He was permitted to join them for strictly non-competitive club rides from the age of thirteen and became a member when he reached the minimum age of fourteen; however, his father didn't allow him to begin racing for another four years. His father relented: Robinson's first attempt was a 25-mile individual time trial on a hilly parcours in March 1948 when he was seventeen and he completed in 1h14'50", a very respectable time for any rider making his debut, but he had already fallen for the glamour of European racing by this time and dreamed of a future in mass-start stage events - unfortunately, at that time the British League of Racing Cyclists (formed by Percy Stallard to establish and promote mass-start road racing in Britain) was still waging war with the National Cycling Union (which had banned mass-start road racing in Britain ever since the late 19th Century, fearing police would ban all bicycles from public roads). Robinson was an NCU member and was thus limited to the few NCU mass-start events that took place, all of them in very restricted circumstances such as on roads in public parks during the hours when the park was closed; he raced many times at Sutton Park in Birmingham where races had to stop before 09:30 when the public were allowed in.

Road racing was not banned on the Isle of Man, which as a self-governing nation had its own cycling union, and after taking third place in the Road Time Trials Council's National Hill Climb Championships and fifth in the NCU's mass-start closed circuit championships the previous year, Robinson went there in 1951 to come seventh at the prestigious Manx International. It wasn't banned in Ireland either; that same year he won Dublin-Galway-Dublin. In 1952 he entered the Route de France as part of a joint NCU/Army team whilst completing his mandatory national military service and did well, taking fifth place overall until the race reached the Pyrenees with three days to go - "I'd never seen mountains like that before" he said afterwards, having fallen into 40th place. That summer he and older brother Des were selected for the British team going to the Olympics; Brian finished in 27th place and Des in 26th. Jacques Anquetil, who would go on to become the first man to win the Tour five times and is still considered by many to be the greatest cyclist France has ever produced, was 12th; a month later at the World Championships Robinson raced against him again and they tied for eighth place. In 1954, having finished his national service, he signed to a team sponsored by Ellis Briggs as an independent; he was second overall in the Tour of Britain and won Stage 6 at the Tour d'Europe, a race held that year and again two years later before vanishing.

Later in 1954, Robinson was invited to join Hercules, a team that had originally been set up to break cycling records with riders including Eileen Sheridan but had later been approached by Derek Buttle who had been racing in France since 1952 with a plan to set up a road racing team. He accepted and, in 1955, he formed part of the first British team in the history of the Tour de France (Holland and Burl, back in 1937, had ridden for a British Empire team that included a Canadian rider). With many members of the team having little or no experience of racing in Europe and none at all of a Grand Tour, the race soon proved itself to be much, much harder than any of them had expected: only Robinson and Tony Hoar could finish, and Hoar was Lanterne Rouge. Robinson, meanwhile, proved himself - he was a respectable 29th, yet Hercules were not encouraged by his success to continue their racing program and the team dissolved at the end of the 1955 season. The following year, he demonstrated that he really was a rider able to take on the best Europe had to offer by performing well at the Vuelta a Espana (where he rode with a Swiss-British team led by le pédaleur de charme, 1951 Tour victor Hugo Koblet), then went to the Tour with a mixed-nationality team that included Charly Gaul, who had been third overall in 1955. Robinson finished Stage 1 in third place before taking 14th in the overall General Classification; Gaul, who won two editions of the Giro d'Italia and one of the Tour in spectacular style and who is still considered by many to have been the greatest climber cycling has ever seen, beat him by just one place.

If anyone now doubted that British cyclists couldn't hold their own at the very top of their sport, they were about to have their illusions shattered because early in 1957, having become the first british rider to sign a contract with a top continental team, Saint Raphael-R. Geminiani, Robinson beat Louison Bobet by almost a minute to win the Nice criterium. A short while later he took second and third place stage finishes at Paris-Nice, then he came third at Milan-San Remo ("by far the greatest achievement by a British roadman in a single-day race since the halcyon 19th-century days of George Pilkington Mills and the Bordeaux–Paris," said Cycling magazine). He crashed out of the Tour that year, but in 1958 he was second behind Arigo Padovan on Stage 7 - until Padovan was relegated to second after judges declared him to have twice tried to force Robinson into the crowd during the final sprint and, for the first time and more than half a century after the Tour began, a British rider had won a stage. It has been said that Stage 7 was the least important stage of the 1958, and those who say so are correct: the Pyrenees and - more important still - the Alps, where the TV crews that were for the first time that year broadcasting live from the mountain stages captured for posterity the incredible climbing abilities that won Gaul his Tour, were still far away and the General Classification contenders were saving their legs for the time trial the next day (and riders needed to think even more carefully than usual about when and where they spent energy, because in 1958 there were no rest days). Yet as far as British cycling fans - and fans of British cycling; an ever-growing number of whom, thanks to Robinson and Simpson (who was offered a contract with Saint Raphael the following year on Robinson's recommendation) and all those who followed the trail they blazed, are not British - it is one of the most important stages in the history of stage racing.

In 1959 Robinson won Stage 20. It was, once again, not a very important stage - the final Alpine stage had been the day before and Federico Bahamontes, who was the only rider able to even get near to Gaul when conditions suited the Luxembourger, had as good as won overall already. The other big names, competing for second and third place in the General Classification, were not concerned when Robinson broke away; however, with only two stages to go plenty of domestiques and also-rans would have been looking to grab any limelight that was available. That Robinson won by 20'06" - second place was taken by Arigo Padovan of all people - is therefore an impressive result. He continued racing for another three years, winning a stage at the GP du Midi-Libre and the Tour de l'Aude in 1960 and the General Classification at the Critérium du Dauphiné in 1961. 1962 passed without victory, then he was third at a criterium in Chaumont; he retired from competition in 1933 but still rides today.

John Tomac
If anyone can be said to have lived their life in cycling, it's John Tomac. Born in Michigan on this day in 1967, Tomac began BMX racing when he was 7 and had won a National Championship by his mid-teens; then after moving to California in 1986 he took up mountain biking and won races in that discipline too. Before long, a combination of race results and personality had made him one of the most famous riders in the world - Mongoose, the bike company for whom he had ridden throughout his professional career, marketed a "John Tomac Edition" mountain bike in 1987 and he starred in one of the first mountain biking videos that same year.

Between 1988 and 1991, Tomac also competed in road racing, winning the National Criterium Championship in his first year as a professional before going on to compete in several prestigious European events including Paris-Roubaix and the Giro d'Italia without notable success, leading to a decision to concentrate on mountain biking after 1991. Towards the end of the decade he formed a partnership with Doug Bradbury, the founder of the Manitou MTB suspension company, and set up Tomac Cycles. He no longer owns the brand - which passed through the hands of the American Bicycle Group conglomerate before being bought by Joel Smith, a businessman who had made his name in mountain biking as brand manager with components manufacturer Answer - but still takes an active role in running it and is involved in the design of new bikes.


Jules Rossi, who was born in Acquanera di San Giustin, Italy on this day in 1914 and went to France to live with relatives when he was orphaned at the age of 6, became a professional rider with Alcyon-Dunlop in 1935. He remained with them for most of his career, which lasted for sixteen years; in 1937 he became the first Italian to win Paris-Roubaix (unless - as is possible - Maurice Garin was still Italian when he won), in 1938 he won Stage 6a at the Tour de France and then first place at Paris-Tours after maintaining an average speed sufficient to also win him the Ruban Jaune.

Bobbie Traksel, born in Tiel, Netherlands on this day in 1981, won the 2010 Kuurne-Brussels-Kuurne after battling through weather so bad that 169 of the riders to start the race abandoned.