Cees Stam
Born in Koog aan de Zaan, Netherlands on this day in 1945, Cees Stam was Amateur National Stayers Champion from 1968 to 1970, then turned professional with the Ketting team and remained with them for most of his career. His Stayers success continued - he was Elite National Champion from 1971 to 1974 and again in 1978, European Champion in 1974 and 1975, World Champion in 1973, 1974 and 1977 and usually took second or third place whenever he didn't win, including at the German National Championships in 1975 where he won silver.

Stam set a new derny-paced Hour Record in 1974 when he covered 82.998km at Utrecht's Galgenwaard stadium, since demolished and replaced with a newer stadium; he was also a remarkably persistent six-day racer, entering almost fifty as a professional yet winning none of them. When he retired from competition, Stam became coach of the national stayers' team and ran a sports clothing business, then retired from it in 2008. He still works as a derny rider at track events to this day. 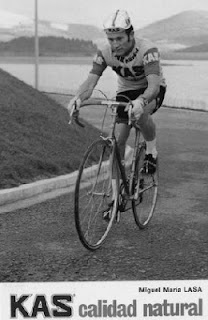 Born in Oiartzun, Euskadi on either this day, the 1st of November or the 4th of November (depending on the source) in 1947, Miguel Lasa turned professional with Fagor in 1967 and won the National Hill Climb and Individual Time Trial Championships; then two years later won the Hill Climb title again and finished two stages at the Tour de l'Avenir in third place. In 1970 he won the Sprints classification at the Vuelta a Espana and Stage 12 at the Giro d'Italia, where he finished in eighth place overall.


Jana Belomoina, born in Ukraine on this day in 1992, took third place in the Elite National Hill Climb in March 2010 when she was only 17 years old.

Eberado Pavesi, who was born in Colturano, Italy on this day in 1883, became a professional cyclist in 1904. In 1907 he finished the Tour de France in sixth place, becoming the second Italian rider to have completed the race (Rudolfo Muller was fourth in 1903); in 1910 he won Stages 5 and 9 and was second overall at the Giro d'Italia, then in 1912 he formed a part of the Atala team that won (the General Classification was contested by teams for that one edition - had it have been contested by individuals, decided on points or time, Pavesi's team mate Carlo Galetti would have won) and in 1913 he won Stages 2 and 9 and was once again second overall. Following his retirement in 1919, Pavesi became a directeur sportif and worked with a young Gino Bartali who would go on to win the Tour and the Giro several times. Pavesi died on the 11th of November in 1974, aged 91.

Bruce Biddle, born in Warkworth, New Zealand on this day in 1949, was National Road Race Champion in 1969 and won the Road Race at the 1970 Commonwealth Games. At the 1972 Olympics he was fourth in the Road Race behind third place Jaime Huelado of Spain, who subsequently failed an anti-doping test and was disqualified; however, as Biddle had not also been subjected to a test he could not be upgraded to a medal-winning position. In 1976 he finished two stages at the Tour de Suisse in second place and one at Tirreno-Adriatico in third and in 1978 he was 34th overall at the Giro d'Italia.

Raymond Bilney, born in Australia on this day in 1945, took fourth place in the Road Race at the 1964 Olympics - his time of 4h39'51.74" was equal to that recorded by Walter Godefroot, Gösta Pettersson, Eddy Merckx and several other big-name riders of the era. In 1970 he was second in the Road Race at the Commonwealth Games, finishing one second behind Bruce Biddle of New Zealand (see above).

Christos Winter, born in Mount Gambier, Australia on this day in 1989, enjoyed a very short cycling career during which he became Junior National Duo Time Trial Champion (with Jack Bobridge) and rode with the winning Junior National Championships Team Pursuit squad, both in 2007. Aged 20, he took an internship at Channel 9 News and later became presenter of nationwide music show Hit List TV.