Mariana Pajón
Born in Medellín, Colombia on this day in 1991, Mariana Pajón began cycling in early childhood and won her first National Championship when she was five years old. Four years later, she added her first World Championship.

Since then, Pajón has been collecting gold medals quicker than most BMX riders collect bruises and can now claim no fewer than nine Latin American Championships, ten PanAmerican Championships and fourteen World Championships, making her among the most successful riders in the history of BMX. She dominated the competition at the 2012 Olympics in London, where she was also Colombia's flag bearer, setting the fastest times in all three semifinals before beating New Zealand's Sarah Walker by 0.427" in the final. Pajón is nicknamed "The Queen of BMX," her reign looks set to continue for many years.

Mark Scanlon
Irishman Mark Scanlon, born in Cranmore on this day in 1980, became Junior World Road Race Champion in 1998. The race also took place on this day - his 18th birthday. He was also National Junior Champion and his performance was sufficiently impressive to gain him an invite to join Rabobank's development team, which he accepted.

He won silver at the National Championships and won two stages at the Tour of Hokkaido in 1999 and 2000, but missed many opportunities to progress due to a series of injuries and illnesses during the same period; at the end of 2000 he let the team and joined amateur French club CC Etupes and rode in some of the less well-known French races - however, he began to enjoy success at home again, winning a stage at the Rás Tailteann and second place at the Nationals. This brought a new offer of a trainee contract with Linda McCartney Racing and, when it was upgraded to a full professional contract for 2001, it looked as though his career was finally about to get off the ground. Then in February, the team collapsed. He found a place at Mercury-Viatel, a US pro team then home to Floyd Landis (and Wim Vansevenant, who holds the Lanterne Rouge record having finished the Tour de France in last place three times), but his contract was not extended into 2002 and he returned once again to the amateur ranks, racing for continued racing for VC Nantes 44 and VC La Pomme Marseilles.

That year, Scanlon won a race in France, then the National Championship, another race in Galway and took third place at the GP d'Isbergues and for Stage 3 at Paris-Corrèze. This time it was AG2r Prévoyance that came calling and he joined them as a trainee in September, then became a full professional in 2003, the first of four years with the team. He won the National Championship for a second time that year, along with a stage at the Post Danmark Rundt; in 2004 he won two races in Estonia and was selected for Ag2R's Tour de France squad, completing the race in 89th place. 2005 started with a stage win the Circuit des Ardennes, later in the season he won silver at the Nationals after being beaten by 12 seconds by David O'Loughlin, who had also been a trainee at Linda McCartney back in 2000.

Scanlon rode the Giro d'Italia in 2006 but left the race following Stage 11; at the end of the year he also left AG2R, saying that the pressure of riding at ProTour level was too much for him. Continental-class Toyota-United picked him up for 2007, but he won nothing with them. By the end of the summer, it was widely rumoured that he was on the verge of announcing his retirement, but Scanlon denied that this way the case. "I am not enjoying it, and I haven't enjoyed it for some time," he told the Sunday Tribune, adding that one of the reasons he wasn't enjoying it was due to doping and the fact that even clean riders were suspected of doping whenever they won anything. Like many riders before him, the loneliness he experienced after relocating to France in search of a career had also badly affected him: "I think my major error was staying in Marseille when I turned professional. I couldn't handle living abroad by myself in a small apartment in the south of France." Finally, he revealed that he hoped to one day make a return: "I'd like to captain a third division Irish continental team and there is always the Irish track cycling team if I could get my head around that."

Pierre Rolland
Born in Gien on this day in 1986, Pierre Rolland joined Crédit Agricole with a trainee contract late in 2006, then got promoted to full professional status for the 2007 season - that year, he was second at La Tropicale Amissa Bongo and won Sage 2 at the Tour de Limousin. The following year, he won the King of the Mountains competition at the Critérium du Dauphiné. France, having gone without a Tour victory since Bernard Hinault's final triumph 21 years earlier, sat up and took notice.

Rolland rode his first Tour in 2009 and came 22nd; not quite comparable to Hinault's first Tour, which he won, but a very, very good debut by any standards. He slipped to 58th place in 2010, but then in 2011- having spent most of the race helping Thomas Voeckler keep the maillot jaune - he achieved a truly remarkable Stage 19 victory when he beat Euskaltel-Euskadi's Samuel Sánchez (who would win the King of the Moutains that year) and Saxobank's Alberto Contador (who was popularly considered the greatest all-rounder stage racer in the world) on the Alpe d'Huez. He finished in 11th place overall and won the Youth category; now that Voeckler was 32 cycling fans throughout France declared Rolland to be their new great hope

At the 2012 Tour, Voeckler won two stages while Rolland won one, but the younger man won his in spectacular style with a late attack on the Les Sybelles climb at the end of Stage 11. He went on to finish the race in eighth place - the best General Classification result of any French rider that year.


Jim Hendry, born in Perth, Scotland on this day in 1939, rode as a professional for Mottram Cycles and as an independent in the late 1960s. His race results were not especially impressive, but since retiring from competition he has become an important figure in British cycling - having worked as a coach while still racing, he held a number of voluntary team management and coaching positions between 1970 and 1997, when he became Chief Executive and then General Secretary of the British Cycling Federation. In 2007 he was awarded an MBE in recognition of his services to sport; he is now British Cycling's honourary archivist. 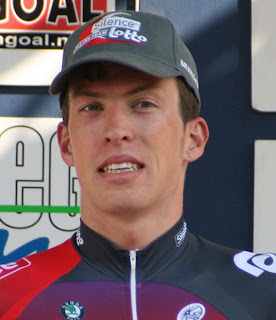 Antonio Piedra, born in Seville on this day in 1985, won Stage 15 at the Vuelta a Espana in 2012 after leaving other members of a breakaway behind on the first Hors-Categorie climb of the race.

Bart Brentjens, who was born in Haelen, Netherlands on this day in 1968, won the cross country race at the UCI Mountain Bike & Trials World Championships in 1995, then became the first man to win an Olympic gold medal for cross country mountain biking when the sport made its debut at the Games in 1996.