Iban Mayo
The French, at one time, elevated cycling to the level of a religion, as did the Italians. The Belgians are obsessed with it, and the British are becoming so. The Dutch adore the sport too - but no other people have cycling in their blood in quite the same way that the Basques do, and nowhere else is cycling an expression of national identity. There are 2.1 million Basques in their country, Euskadi; according to author Daniel Coyle, 70 of them were riding among the 400 ProTour athletes in 2004, and rider Haimar Zubeldia says that cycling is "an emanation of our people." Iban Mayo, born in Igorre on this day in 1977, was the best of them all during the first five years of the 21st Century.


Ewald Hasler, Alois Lampert and Rolf Graf
Liechtenstein has produced a very small number of professional cyclists. This isn't especially surprising as it's a very small nation, just 160 square kilometres with a population of around 35,000 - and many people are put off cycling by mountains, which will always limit the number of people taking up a sport in the only nation lie entirely within the Alps. It is, therefore, curious that two of the most famous, Ewald Hasler and Alois Lampert, were both born in Eschen (which, with a population of a little over 4,000 people, is the nation's fourth-largest city) on this day in 1932. Hasler finished the road race at the 1952 Olympics in 43rd place and turned professional for Gitane-Hutchinson team in 1954 (when he rode with Jean Stablinski, Rik van Looy and Gilbert Bauvin) but switched that same year to the Swiss Cilo team, then retired in 1957 when he rode for König. Lampert became a professional two years later with the German Altenburger team, by which point he had already won Stage 4 at the 1951 Österreich-Rundfahrt and been 30th at the same Olympics Hasler rode, but also rode for the Swiss team Mondia with whom he remained for three years. In 1958 he rode for three teams - Mondia, Allegro and Tigra - then retired at the end of the year. 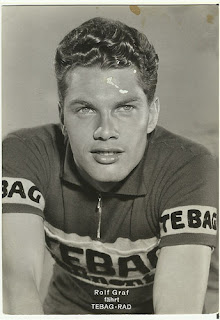