Luc Leblanc
When Luc Leblanc was eleven, a drunk driver ploughed into him and his brother Gilles as the rode their bikes near Limoge, where Luc had been born on this day in 1966. Gilles was so badly injured that he died a short while later, Luc spent the next six months in hospital and ended up with a weak leg that was noticeably shorter than the other. 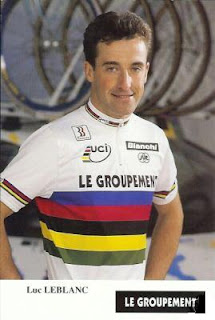 Prior to the "accident," Leblanc's childhood ambition had been to become a priest. However, after a physiotherapist recommend cycling as a way to rebuild strength in his damaged leg, he was spotted by no less a figure than Raymond Poulidor who urged him to consider taking up more serious training with a view to becoming a professional rider. He began to do well in the early 1980s, culminating in a Stage 2 victory at the 1986 Circuit Cycliste Sarthe and earning a contract with the Toshiba-Look team for 1987 - and that year, he won the silver medal at the National Road Race Championship. A year later he won the GP Ouest France and came third overall at the Tour Méditerranéen.

Leblanc rode his first Tour de France in 1990 and finished two stages in the top ten, then in 1991 he finished Stages 12 and 17 in third place and came fifth overall. During Stage 12, he had joined a breakaway with Pascal Richard (Helvetia-La Suisse) and Charly Mottet (RMO). Mottet won the stage with Richard recording the same time, Leblanc was 2" behind them - but he was 6'55" ahead of previous race leader Greg Lemond, which put him into the yellow jersey (he presented it to Poulidor as a sign of gratitude) with an advantage of 2'35". Sadly, it couldn't last - the very next stage, Miguel Indurain beat him by 12'35" and led for the remainder of the race.

There were high hopes that Leblanc would get into the top three at the Tour in 1992 after he won the National Championship, but his leg - which had never fully recovered - started giving him problems. On top of that, he had a spell of bad luck with the bike and told team mates he was seriously considering retiring, then abandoned during Stage 14 en route to Alpe d'Huez. Fortunately, he was talked out of giving the sport up and, after medical attention and more physiotherapy, his leg began to improve and he was able to finish Stage 3 of the Giro d'Italia in third place. By 1994 he was even better than ever: he won the King of the Mountains at the Vuelta a Espana, then achieved his first Grand Tour stage win with victory on Stage 11 at the Tour - another five top ten finishes put him into fourth place overall, and later in the year he became Road Race Champion of the World.

The World Championship brought lucrative offers from a variety of teams. He settled for the French Le Groupemont, but disaster struck when the team's sponsors withdrew a week before the Tour and left them unable to take part. He then went to the Italian team Polti, but new problems with his leg resulted in an unsuccessful season and more surgery; once again he made a good recovery and in 1996 he won Stage 7, came sixth overall and fifth in the King of the Mountains at the Tour. It would be his last really good year - he won the Giro del Trentino and finished Stage 5 at the Giro d'Italia in second place in 1997 but failed to break into the top 20 at the Tour, then abandoned after Stage 13. In 1998 he finished stage 10 in 11th place, then abandoned after Stage 16.

Polti sacked Leblanc in 1999: his leg was causing problems again and the team decided that he was no longer competitive. An Italian court decided that this constituted unfair dismissal and ruled that Polti would have to pay him up until the date the contract was originally due to expire; by 2007 the money had still not been paid and Leblanc had to sue the UCI and Italian and French federations in order to get it. He admitted during Richard Virenque's trial in 2000 to using EPO when training for the Tour and the Vuelta. 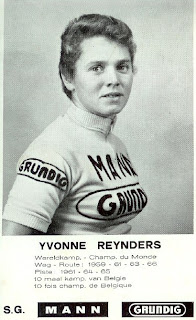 Yvonne Reynders, born in Schaarbeek, Brussels on this day in 1937, won a total of three Track World Championships (Pursuit 1961, 1964, 1965), four World Road Championships (1959, 1963, 1965, 1966), three National Track Championships and seventeen criteriums as well as taking numerous silver and bronze medals during her career. She is frequently listed as the second most successful female cyclist of the 1960s after Beryl Burton.

José Vicente García, born in San Sebastián, Spain on this day in 1972, joined Banesto in 1994 as a trainee. He was still with them when the team became iBanesto in 2001, Illes Balears-Banesto in 2004, Illes Balears-Caisse d'Epargne in 2005 and Caisse d'Epargne-Illes Balears and year later, then  Caisse d'Epargne a year after that. He finally announced his retirement in 2011, by which time it had become Movistar - eighteen seasons with the same team. He won a stage at the Vuelta a Espana in 1997 and another in 2002 as well as one at the Tour de France in 2000.

Born in Cardiff, Wales on this day in 1913, Reg Braddick's interest in cycling began with a job as a butcher's delivery boy, riding around on a heavy utility bike. He represented his country - Wales, not Great Britain - at the British Empire Games (the predecessor to the Commonwealth Games) in 1938 but won no medals and won the National Road Race Championship in 1944. Braddick opened a bike shop in Cardiff, and it's still trading today (51°29'17.55"N 3° 9'19.19"W), now run by his son, daughter-in-law and grand-daughter, who also maintains the company website - he started the Cardiff Ajax CC in the rooms above the shop in 1945. Among many other riders to have been members over the years are Sally Hodge, who became the very first Women's Points Race World Champion in 1988, and Nicole Cooke - ten-time British Road Race Champion, 2008 World Road Race Champion and twice winner of the Tour de France Féminin. 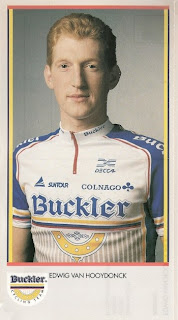 Edwig van Hooydonck, who was born in Ekeren, Belgium on this day in 1966, marked himself out as a future Classics great when he won the Under-23 Ronde van Vlaanderen in 1986 and the Brabantse Pijl a year later. He also rode well in stage races, winning the Vuelta a Andalucia and Stage 4 at the Tour Méditerranéen in 1988, stages at the Étoile de Bessèges, Tour of Ireland and the Vuelta a Espana (his only Grand Tour stage win) in 1990 and at the Tours de Romandie and Luxembourg in 1993, but the Classics remained his speciality: he won Kuurne-Brussels-Kuurne and the Ronde van Vlaanderen in 1989, the Dwars door Vlaanderen in 1990, the Dwars door Vlaanderen, Brabantse Pijl and Ronde van Vlaanderen in 1991 and the Brabantse Pijl for a third time in 1993 and a record fourth in 1995. He retired that year, saying that doping was now so prevalent in cycling that he was unable to remain competitive unless he too cheated - something he refused to do.

Ricardo Serrano, born in Valladolid on this day in 1978, won a stage, the Points competition and the General Classification at the Vuelta a la Rioja in 2006, finished Stage 16 at the 2007 Giro d'Italia in third place and won Stage 1 at the Tour de Romandie in 2009. Later that year he was suspended from competition and his Fuji-Servetto team pending an investigation into abnormal blood values revealed by his biological passport. The suspicious values were believed to have dated from the previous year when he rode for the Tinkoff Credit Systems team.

Thomas Stevens, who was born in Berkhamsted, Great Britain in 1854 and emigrated to the USA in 1871, completed the first ever transcontinental ride across the country on this day in 1884. He had begun the journey in San Francisco on the 22nd of April, equipped with his trusty penny-farthing, a spare shirt, several pairs of socks, a revolver and a raincoat that also served as a tent.