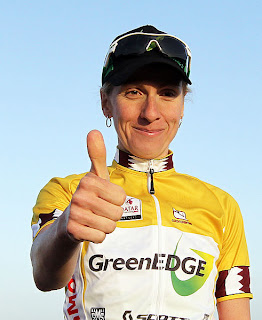 Judith Arndt
Born in Königs Wusterhausen, Germany on this day in 1976, Judith Arndt has become one of the greatest all-rounders in cycling with numerous excellent results in road racing, time trials and on the track.

Arndt turned professional with the Red Bull team in 1999, at a time when she already had five National titles and one World Championship to her name. As a result she did not experience a year or two in which her results dipped while she adjusted to the increased competition as most riders do when they move up to the top level of the sport - having been competing at Elite level since 1995, there was no nasty surprise waiting for her and in that first year she won Stage 1 and second place in the overall General Classification at the Holland Ladies' Tour, the Tour de Bretagne and numerous other events. She was a popular favourite for the 2000 Olympics but picked up a virus shortly before the Games; however, the National Pursuit and Points race prevented the year from becoming a total wash-out, as did silver medals for the same two events at the World Championships.

2001 was the year in which Arndt transformed herself from a track rider who could also ride well on the road into a world-beating road racer, winning another Tour de Bretagne and the Gracia Orlova in addition to second place at the Tour de l'Aude, the Thüringen-Rundfahrt and the Women's Challenge. She also won the National Individual Time Trial Championship for a third time and came third in the Road Race at the Nationals. One year later she won the National Road Race, the Women's Challenge, the Tour de l'Aude, the Tour de Snowy and the Redlands Classic. Since then, she has added more three more victories at the Gracia Orlova (2005, 2006, 2007), another Tour de l'Aude (2003), two editions of the Emakumeen Bira (2009, 2012), the National Individual Time Trial title another six times (2003, 2004, 2005, 2010, 2011, 2012), the Tour of Qatar (2012), two editions of the Ronde van Vlaanderen (2008, 2012), numerous other races and a vast number of other podium places. 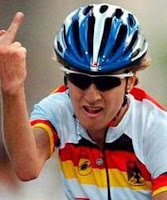 Sometimes outspoken, Arndt has clashed with the German cycling federation in the past. The most notable example of this came in 2004 when she raised her finger at the judges as she crossed the line (the gesture means "fuck off") to show what she thought of the Federation's decision not to select her long-term partner Petra Rossner in the Olympic team (Rossner won the World Cup in 2002 and had become National Road Race Champion two months before the Games; it does, therefore, seem strange that she wasn't selected). The Federation, as tends to be the way with national cycling federations, didn't take kindly to being criticised by a rider and forced Arndt to apologise; nevertheless, she earned an army of new fans.

Roger Hassenforder
Since the earliest days of the sport, cycling has been populated by eccentrics and characters - one of the most amusing of them all was Roger Hassenforder, who was born in Sausheim, France on this day in 1930 and became known as le boute-en-train ("the merry-maker") to the French and de Clown van de Elzas ("the Clown of Alsace") the the Dutch and Flemish. One of his most popular stunts was giving interviews during races, including the Tour de France. 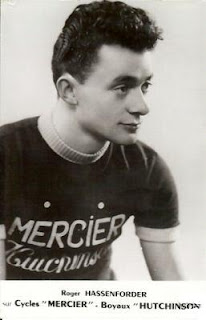 When Hassenforder retired, he opened a cafe at Kaysersberg, one of the most beautiful and historic towns in the Alsace. It rapidly became a favourite haunt of local cyclists and those who visited from around the world, growing into a restaurant and hotel - it can still be found at 129 Rue General de Gaulle and, while no longer owned by the Hassenforder family, the new owners have been wise enough to keep it as the rider intended and maintain its cycling links.