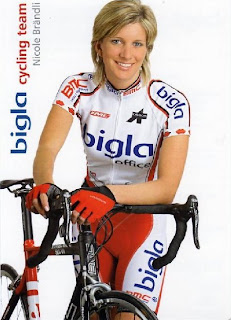 2002 was another good year with overall victory at the Vuelta Castilla y Leon, a stage win at the Tour de France Feminine and a second National Road Race title - a third came in 2003, along with the Gracia Orlova and her second Giro Donne. She won another Gracia Orlova and the GP Carnevale d'Europa the next year, then her third Giro Donne in 2005, then the GP Ouest France and a second Giro della Toscana in 2006. 2007's victories were limited to stage wins at the Giro Donne (Stage 5) and Trophée d'Or Féminin (Stage 2). In 2008 she once again rode at the Olympics, coming 18th in the Road Race, also winning the Giro del Lago Maggiore-GP Knorr , GP Brissago and the Leo Wirth Strassenrennen, then called it a day after achieving just one victory (the GP Raiffeisen) in 2009.


André Leducq
André Leducq, who died on this day in 1980, amassed considerable success during his youth - he came 3rd in the National Amateur Championships when he was just 19 and won the event the following year - which set him on a path that would lead to him becoming one of the most popular riders in cycling history, both at home and in England.

Leducq's Tour de France record of 25 stage wins held for a quarter of a century until it was finally broken by Eddy Merckx. He rode his first Tour in 1927 and won Stages 6, 23 and 24, coming 4th overall, then came 2nd in 1928 after winning Stages 2, 10, 11 and 16, having already won Paris-Roubaix that year. In 1929, he won Stages 2, 11, 17, 18 and 21 and wore the yellow jersey for one day (this being the famous incident when he, Victor Fontan and Nicolas Frantz had the same time following eventual winner Maurice Dewaele's loss of the race leadership due to a series of punctures, thus becoming the only time that three riders all wore yellow - an event that is extremely unlikely to happen again, since times can now be measured to thousandths of a second if need be) but this time dropped to 11th overall.

His second Tour victory came the following year when he took Stages 5 and 16 and wore the yellow jersey for 13 days, making him the first rider to win a Tour ridden by National rather than trade teams. In 1931, he won Stage 20 and was 10th overall but won the General Classification at Paris-Tours, then won a second Tour in 1932 along with Stages 3, 11, 13, 15, 20 and 21, spending 19 days in yellow. That was the last of his top 5 finishes - in 1933 he was 31st overall with wins for Stages 13 and 14, then he was 17th the next year when he won the Stage 18b time trial and in 1938 he shared victory for Stage 21 with Antonin Magne and came 30th overall. (For much more on Leducq, why he was popular with the English and his incredible good fortune whilst facing almost certain execution at the hands of the Nazis, click here.)

Geoff Wiles, born in Strood, Kent on this day in 1944, was the son of cycling parents who would take him and his sister on long distance rides in sidecars fitted to their bikes. Before too long, the bug bit and he joined the Youth Hostels Association in order to meet other young cyclists. When he was fifteen he entered his first 10-mile time trial, riding a heavy and antiquated fixed gear bike - his time, 26'47", is still a respectable time for an amateur aboard any bike today. A few years later on, when he'd left school and was working at an oil refinery on Kent's Isle of Sheppey, he made friends with a colleague who rode with the Medway Road Club. He joined up and at the age of 18 came third in his first race, then a year later won the Vectis three-day on the Isle of Wight.

Aged 22, Wiles was selected to compete with the South of England team in the 1966 Tour of Britain, at that time known as the Milk Race, and he won Stage 6. The next year, he took part in the famous Peace Race through East Germany, Poland and Czechoslovakia with a team sponsored by the Clive Stuart bike maker, then moved on to the Holdsworth-Campagnolo team in 1971 and won the National Madison Championship with Dave Nie. Geoff won numerous criteriums in the following years before becoming National Roasd Race Champion in 1976.

In 1977, Holdsworth went to the Vuelta a Espana, the Ronde van Vlaanderen, the Amstel Gold Race and Paris-Roubaix. They were, like almost all British riders of those times with the exception of Tom Simpson, hopelessly outclassed by the French and Belgian riders but appear to enjoyed the experience. At Paris-Roubaix they finished well behind the leaders and main field, arriving at the velodrome to find that as the first twenty riders had already got there the gates had been closed and nobody else was allowed in. Having ridden it for themselves, they knew that the legendary Hell of the North is in an entirely different category to all other racers and that completing the parcours is every bit as impressive as winning; they were, therefore, determined to get to the very end. "So we bunked over the wall and did our lap," Geoff said. "We could then say we'd completed the course, even though we were not included on the official list of finishers."

In the late 1970s and early 1980s when BMX first began to appear in Britain, many cyclists hated it with a passion and thought that if they became popular they'd kill off "proper" cycling for good. Wiles was a far wiser man; he realised that any kind of cycling should be encouraged and also knew that BMX would attract youngsters who might otherwise never have developed an interest in cycling at all, became a very vocal advocate for the new sport, wrote books and magazine articles and was perhaps the person who did most to popularise it in Britain. In 2012, when Wiles was 67, he took part in the Alf Buttler Peace Race Tribute Ride during which he and Alf's son Alan retraced the 2,414km and thirteen stages taken by the inaugural 1955 race.


Freddy Excelino González Martínez, more commonly known as Fredy González, won the King of the Mountains at the Giro d'Italia in 2001 and 2003. He was born in La Ceja, Colombia on this day in 1975.