Liège-Bastogne-Liège, the oldest of the Classics, was held on this day in 1925 - though it was the 15th edition, the race had first been held 33 years earlier. The winner was Georges Ronsse who would also win Paris-Roubaix the following year.

Ottavio Bottecchia
Born on the 1st of August 1894, in 1924 Ottavio Bottecchia became the first Italian to win the Tour de France. He was found lying unconscious on the 3rd of June next to a road near Peonis, not far from his home, by local farmers who took him to a nearby inn. His injuries convinced them that a priest should be summoned to deliver the last rites, then he was taken in a farm cart to a hospital in Gemona where doctors found that he had several broken bones and a fractured skull. His bike - discovered a short way from his body - was completely untouched; neither were there skidmarks on the road to suggest he'd been hit by a vehicle. He never regained consciousness and when he died on this day in 1927, suspicions arose that he had been murdered.

A police investigation concluded that he had fainted due to the hot sun and crashed, but his body had been found in the morning before it got hot and as an experienced cyclist and veteran of five Grand Tours, he would have been accustomed to riding in hot weather. Meanwhile, the priest hinted that Bottecchia had been murdered by Fascists: a dangerous thing to say since Mussolini was in power, but could that be why the police had closed the case with what appears to be an unlikely verdict? 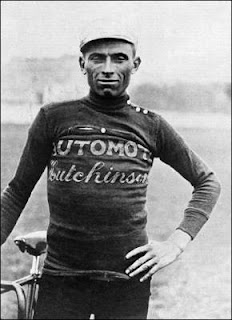 Why would the Fascists want to kill him anyway? Bottecchia, the son of a poor family, had attended school for only a year before finding work as a bricklayer and was almost completely illiterate until his training partner Alfonso Piccin taught him to read using the Gazzetto dello Sport and anti-Fascist pamphlets published by Mussolini's opponents. In 1924, when he was leading the Tour de France, he had refused to wear the yellow jersey during Stage 9, which passed very close to the Italian border, yet he insisted on wearing it all the way home on the train after he'd won. Several times, his bike had been sabotaged before races begun, which was believed by many - and, apparently, by Bottecchia himself - to have been carried out by Fascists. Was he, therefore, trying to blend into the peloton that he couldn't be as easily singled out for attack as he would have been in the maillot jaune? Known to have liberal political views, could the pamphlets have given him an understanding of the dangers of Fascism and made him actively opposed to it? Were the Fascists concerned that he might use his celebrity to denounce them? Many years later, an Italian man dying of his wounds after being stabbed in New York claimed that he had carried out the "hit" and named one Berto Olinas as the man who, he said, had recruited him; but despite investigation nobody of that name was ever found.

Bottecchia, many have argued, would not have been seen as much of a foe by Mussolini - after all, his career was fading and, in those days before Europe-wide news coverage, they say he would have been relatively unknown in Italy compared to France. But was this the case? It had only been two years since his second Tour victory when the tifosi flooded over the border into France in such large numbers that extra police had to be drafted in to keep them under control: news traveled slower in those days, but it still traveled - and those same tifosi, with their legendary passion for cycling, would most certainly have known who he was and listened to what he had to say. Secondly, he was very well known indeed in France (despite his French being limited to the phrase "No bananas, lots of coffee thank you!"); Fascism was a Europe-wide movement, and its supporters would have been every bit as concerned about a man capable of stirring up anti-Fascist sentiment there as in Italy - and he had a history trying to educate others about the dangers of the movement, too, which earned him the reputation of a moraliser because at that time few people yet understood just how dangerous the philosophy could be. They also say that Mussolini would not have been especially concerned about an enemy who remained only barely semi-literate, but semi-literacy is not the same thing as stupid - the year before he died, Bottecchia had begun work designing bikes with Teodoro Carnielli (Greg Lemond won the 1989 Tour on a Bottecchia-branded Carnielli bike), which suggests he was able to understand geometry and at least basic engineering principles. He was, therefore, at least reasonably intelligent which, combined with a passionate nature (found in all Grand Tour winners, especially Italian ones) and his fame added up to made him an enemy with too much potential strength for Mussolini to simply dismiss. Therefore, it seems very likely that the Fascists would have known exactly who he was and he may very well have been on their hit list - and anyway, Fascists are known for their willingness to do away with all rivals given a chance, not merely the most powerful ones.

There is alternative explanation. Years later, a farmer from Pordenone made a deathbed confession that he had killed Bottecchia after finding him stealing grapes from his vineyard. "He'd pushed through the vines and damaged them," he explained. "I threw a rock to scare him, but it hit him. I ran to him and realised who it was. I panicked and dragged him to the roadside and left him. God forgive me!" Where the story falls apart in that Bottecchia was found in Peonis, nearly 60km from Pordenone. Secondly, anyone who has ever picked and tried to eat a grape in mid-June will know that at that time of the year they're small, hard and so bitter as to be almost entirely inedible. Strangely, his brother was murdered in almost the same place two years later.

Mattia Gavazzi
Born on this day in 1983, Mattia Gavazzi is the son of Pierino Gavazzi who rode professionally between 1973-1993 (older brother Nicola, born in 1978, was also professional between 2001-2004). Mattia's first successes came in 2004 when he won the Trofeo Papa' Cervi, the Circuito del Porto-Trofeo Arvedi and Stage 10 at the Baby Giro. He won nothing in 2005 or 2006, though a few podium finishes proved his career hadn't come to an early end, then won two stages at the Croatian Jadranska Magistrala and three at the Tour de Normandie in 2007.

More stage wins came in 2008, along with victory at the Giro di Toscana, followed by an excellent 2009 in which he won one stage at the Tour de San Luis, four at the Tour de Langkawi, one at the Settimana Ciclistica Lombarda, three at the Vuelta a Venezuela and two at the Brixia Tour. That looks rather like the palmares of a rider who is on the cusp of breaking through into the upper ranks of cycling, and he won another stage at the Settimana Ciclistica Lombarda in 2010. However, a short while afterwards news broke that a sample taken following the prologue at the same event had tested positive for cocaine - not the first time he'd faced a similar charge, because he'd been banned for fourteen months after a positive for the same drug during his amateur career. He was originally banned for six years, which would in all likelihood have spelled the end of his career, but this was later reduced to two-ad-a-half years in view of his full co-operation with the Italian National Olympic Committee investigation. He will be free to return to competition on the 30th of September 2012.


Eric Heiden is one of the many cyclists to have also enjoyed a successful career as a speed skater (as has his sister Beth Heiden), and is the only speed skater to have won all five speed skating events in a single Olympics. A founding member of the 7-Eleven cycling team in 1981, he worked with Jim Oshowicz (himself a speed skater and Heiden's coach in the sport) to organise the team along European lines, the first time that such a project had been carried out in the USA and remained with the outfit until he retired in 1990. The majority of his cycling victories were in the North American races but he may have won more in Europe had he not have devoted much of his time to studying, first for his BSc from Stanford, then for an MD, also from Stanford. He completed his residency training in orthopaedics in 1996 and now practices as an orthopaedic surgeon in California. Heiden was born on this day in 1958.