On this day in 1868, Britain's first organised bike race took place at the Welsh Harp Reservoir in North West London (correctly the Brent Reservoir), one day after the world's first bike race (or at least, the first we know definitely happened) had been held in the Parc St. Cloud, Paris. The winner was Arthur Markham, who was awarded a silver cup supplied by the landlord of the Old Welsh Harp Hotel that gave the reservoir its name and used his prize money to travel by coach to Bath four weeks later, where he won another race (and saved a man from drowning). Coincidentally, the winner of the race at Parc St. Cloud, James Moore, is believed to be buried next to the reservoir.

The race was the beginning of a long association between cycling and the park surrounding the reservoir, which as a result became home to one of Britain's first cycle race tracks. Today, it's overgrown and almost forgotten, though it can just be made out from the air at the northern end of the reservoir, and cycling is banned almost everywhere within the park.

Michael Rasmussen
Born in Tølløse, Denmark on this day in 1974, Michael Rasmussen rose to fame in 1999 when he won the World Cross Country Mountain Biking Championships, then for abandoning mountain biking in favour of road racing, then for his two Tour de France King of the Mountains victories, then for being kicked out of the 2007 Tour by his own team due to irregularities concerning the details of his  whereabouts supplied to anti-doping officials and finally for the two-year ban he received as a result. His decision to resort to doping was unfortunate both for cycling and for him, because he would undoubtedly have remained a great talent had he have ridden clean.

Rasmussen's nickname is The Chicken, due to his scrawny physique - at just 60kg, he was the lightest rider in his category; the name dating from his mountain biking days when his team mates named him after a character in Danish TV show Bamses Billedbog, about a chicken and a bear (the team's large and hairy mechanic became The Bear). It's a build naturally suited to climbing, in which every excess gram of weight translates into unnecessary effort, reduced speed and, ultimately, pain on the challenging slopes found in races, something that he understood very well: he was obsessed with keeping his own weight down, counting the grains of rice he ate and pouring water rather than milk on his cereal at breakfast, as well a reducing that of his bike, from which he peeled stickers and removed a water carrier. The Colnago Extreme-C machine he favoured is a light bike anyway, but when he'd finished with it the weight was reduced to 6.91kg - 10g above the minimum limit set by the UCI.

Rasmussen was at the centre of a famous and much retold controversy dating from 2002, the year  mountain biker Whitney Richards claims Rasmussen asked him to take a box containing his favourite cycling shoes through customs and deliver them to an Italian training bases. Richards says he became suspicious and opened the box, finding within it numerous doses of Hemopure - a bovine haemoglobin-based oxygen carrier, at that time approved only for veterinary use in Europe and, since no test had been developed to detect it, of very obvious interest to those athletes willing to resort to doping. Richards also says that he destroyed the drug and that Rasmussen was angry when he found out, asking "Have you any idea how much that shit cost?" Whether the incident really  happened has never been proved nor disproved.

Alf Engers
Alfred Robert Engers, born in Southgate on this day in 1940, won numerous time trial titles from the late 1950s through to the late 1970s and set several world records - including being the first man to complete 25 miles (40km) on road in under fifty minutes.

During childhood, Engers showed athletic promise as a runner but was forced to give the sport up after a bike crash left him minus one kneecap - finding that cycling, as a non-impact activity, suited him he joined Barnet CC in 1952. Fortunately, he turned out to be good enough to make some money from it because, a rebellious teen, he was expelled from school and turned out into the wide world without a qualification to his name. Of course, racing didn't bring in enough to live on and so he worked nightshifts in bakery to make ends meet; however, a dose of reality wasn't enough to prevent bad behaviour and he received the first of numerous warnings from the Road Time Trials Council (now known as Cycling Time Trials, the governing body of the sport in Britain) whilst still only sixteen.

His reputation as a trouble-maker would prove problematic - after spending two years as an independent (which permitted him to enter both amateur and professional races), he applied to British Cycling and the Road Time Trials Council for amateur status (ex-professionals were not allowed to compete against amateurs even after retirement, meaning that their racing days were effectively over when they could no longer remain competitive in the professional classes - a factor that seriously limited the number of professional cyclists Britain produced until the rule was eventually repealed); both would refuse for the next seven years. He stuck it out, finding a sponsor in bike shop Ted Gerrard (the first bike shop offer a mail order service), winning races and setting record times, until he was finally granted an amateur licence in 1968. Over the next ten years, during which he became the most respected rider in British time trialing, he would clash with organising bodies time and time again with most rows caused by his tendency to read rule books and form conclusions that varied considerably from theirs regarding what was and was not permitted in races. Nevertheless, his was a talent too great for them to push him out of racing - his 1978 25-mile record, the fifth he set for the distance - stood until 1990, and he was National 25-mile TT Champion six times.

Engers was added to the Golden Book of Cycling in 1991. He still competes in triathlons, but now spends more of his time fishing.

Marino Basso
Born in Italy on this day in 1945, Marino Basso was one of the most respected sprinters in professional cycling during the 1970s and won a total of 15 stages in his thirteen Giri d'Italia, six in a single edition of the Vuelta a Espana (1975) and six in his four Tours de France. He won the Giro' Points competition in 1971 and became World Road Race Champion in 1972. 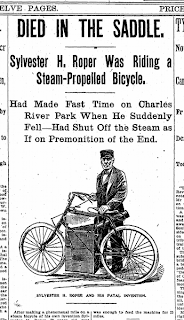 Sylvester Howard Roper, who was born on the 24th of November in 1823, was an inventor and proponent of steam-powered bicycles and, later, cars. Something of a child prodigy, he built his first steam engine when he was twelve years old, despite having never seen one. On this day in 1896, he rode one of his own steam bikes to the Charles River racing track at Cambridge, Massachusetts, where some of the greatest track riders of the day attempted to beat it - among them was Tom Butler, who three years later would be beaten in the World 1-mile Championship by Marshall Taylor, but even he couldn't beat Roper's machine.

When he attempted to compete a flying mile (and recorded an average speed of 64kph), he got into difficulties and crashed, dying instantly from a head wound. A post mortem also discovered that he had suffered a heart attack, though it was not known if the heart attack caused or a result of the crash. His Steam Velocipede, built in 1867, is widely considered to be the world's first motorcycle.

On this day in 2011, just four months after a self-administered blood transfusion nearly killed him, it was reported in the press that Riccardo Ricco was about to sign a contract with the Meridiana-Kamen team and would ride for them at the Tour of Serbia - despite his previous claims to have given up cycling for good. Ten days later, he was formally suspended from competition by the Italian Olympic Committee and ten days after that he was banned from professional cycling for twelve years.