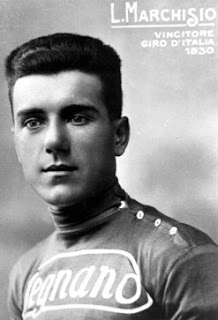 The Giro d'Italia has started on this date eight times - 1930, 1940, 1952, 1975, 1979, 1984, 1989 and 1997. The 1930 edition consisted of fifteen stages - for the first time ever, some of them (Stages 1, 2 and 3) were held in Sicily - and covered 3,907km. The winner was Luigi Marchisio, who came third the following year, then scored three or four respectable results over the next two years before vanishing from the cycling world until his death at the age of 83 in 1992. He may very easily not have achieved his greatest win - Giro organisers had become worried that their race would be boring if Alfredo Binda won for a fifth time and paid him 22,500 lire (considerably more than Marchisio got when he won) to stay away. Aged 21 when he won, Marchisio is still the second-youngest victor ever: only Fausto Coppi, who was 20 when he won his first Giro in 1940, was younger. That year, the race had been extended to 20 stages but shortened to 3,574km. There are two versions of what happened that year.

Some say that, after the aging hero Gino Bartali crashed in Stage 3 and lost his chances of winning, Coppi set out to claim glory for their Legnano team. His chances too seemed to have been ruined after he broke his bike and lost significant time in Stage 5, but after a superhuman effort he successfully clawed his way back into contention and then took the race leadership from Enrico Mollo during Stage 10, after which the two of them worked together to ensure the younger man kept the lead all the way to the end of the race. Others say that, with the old hero Bartali out of the way, young upstart Coppi decided to grab the race for himself and the reason he road so hard was that he didn't want to share glory after Bartali sent the team after him. Either way, in the years to come the two men developed an intense rivalry that divided Italy.

Coppi won again in 1952, the third of his five victories and a spectacular return after injury and the death of his younger brother Serse who had died after an accident at the Giro del Piemonte the previous year - having taken the lead in Stage 10, he attacked on every remaining climb and rode solo over the finish line, beating Fiorenzo Magni by 9'42" after 20 stages and 3,964km.

The 1975 Giro covered 3,933km in 21 stages and saw a superb win for a virtually-unknown Fausto Bertoglio  after taking the lead in Stage 13. The far more experienced Spanish climber Francisco Galdos did everything in his power to take the victory from him and eventually beat him to the finish line on the Passo del Stelvio - however, Bertoglio's overall time remained 41" shorter, and the race was his.


1979 consisted of 20 stages including a prologue, covering 3,301km. Francesco Moser was favourite, but the young Giuseppe Saronni shadowed him all the way and eventually gained a 1'24" lead in the Stage 8 time trial. Though doing so seemed an impossible task, he successfully retained his lead to the very end and even added to it; finally beating Moser by 2'09".


1984, a total of 22 stages and 3,784km, went to Moser. However, his win was controversial as there was some evidence - and many accusations - to suggest that race officials deliberately changed things to suit Moser and ensure that the Frenchman Laurent Fignon could not win. Among them are the allegations that the Stelvio stage (in which Fignon would almost certainly have beaten Moser) did not need to be cancelled - the reason given was snow, but photographs appear to show the road was clear; refusal to allow a team car to assist Fignon when he developed problems with his chain on Selva di Val Gardena; officials turning a blind eye when Moser was pushed up climbs by fans and even claims that the helicopter filming the race was positioned to provide Moser with a tail wind. It should be remembered, meanwhile, that while there is no doubt whatsoever that Moser was happy to cheat when he felt it necessary to do so, the 1984 parcours was far more suited to him that it was to Fignon and even if one assumes the Italian had temporarily turned over a new leaf the odds were in his favour. Felice Gimondi has identified three mistakes that, in his opinion, cost Fignon the race despite a heroic effort to change matters: 1. On the Blockhaus (Stage 5), a notoriously difficult climb in Abruzzo, Fignon attempted to set a pace too high for his own abilities and exhausted himself; 2. He attempted to out-sprint Moser and Moreno Argentin from 800m in Stage 6 and 3. He lost significant time after choosing too high a gear when trying to follow Roberto Visentini on a climb (Stage 13). Whatever happened, it would be Moser's sole Grand Tour triumph. Fignon, meanwhile, would win the next time the Giro started on this day in 1989 - when it was a refreshingly straight-forward 22-stage, 3,623km free of obvious skulduggery.

1997 victory for Ivan Gotti, who - despite another win in 1999, is almost entirely forgotten today, the reason being that his two Grand Tours were not won entirely fairly - he was caught out in a doping control in 2001, which brought his career to an end; then shortly afterwards his marriage broke up too. Today, Gotti is a sales agent for Ferrero, the well-known chocolate manufacturer. When discussing the way his cycling days ended and the way in which the cycling world went after dopers in the early years of the 21st Century, he sounds bitter; however, he seems happy enough overall with his new life.

Born in Lillehammer on this day in 1987, Boasson Hagen became National Under-19 Road Race Champion in 2004 and then Road Race and Time Trial Champion the following year before turning professional with Maxbo-Bianchi in 2006. 2007 was his break-through year with fifteen victories; earning him a place with the legendary, tragically now-defunct Highroad for the next season - which also proved successful with three stages at the Tour of Britain, one at the Tour of the Benelux and, best of all, Stage 3 at the Criterium International.

In 2009 he won the prestigious Gent-Wevelgem, a Flanders Classic that ends with a sprint at the end of a very challenging parcours with several steep climbs and by doing so revealed his speciality - he was a lightning-fast sprinter but, unlike most sprinters, he could take serious abuse on the way to the final few metres. He also rode the Giro d'Italia, his first Grand Tour, that year. Most Grand Tour rookies will not finish, but Boasson Hagen won Stage 7, was second on two more, third on another and in the top ten in two others - an extremely impressive total, despite doing badly on others and coming 82nd overall. Later, he won the Points competition at the Tour of the Benelux - and, as the summer reached an end, announced that he would be joining the newly-formed Sky the following year.

During his first season with the British team, the young rider - still only 22 - did the unthinkable when he took on World Time Trial Champion Fabian Cancellara in a time trial at the Tour of Oman and beat him by an incredible 17", enough to win him the overall Youth category and Points competition. Sky would prove to be his ideal home, giving him room to learn from more experienced riders yet also plenty of scope to keep winning races - he has been National Time Trial Champion at Elite level every year since 2007, won Stages 6 (the first time a stage had ever been won by a British-registered team) and 17 at the Tour de France and the General Classification at the Tour of the Benelux in 2011 (and the Points for a second consecutive year). Since the start of 2012, he has won the Points competition at the Tour Down Under and stages at the Volta ao Algarve and Tirreno-Adriatico. It seems only a matter of time before he wins a Grand Tour.

Joan Llaneras
Joan Llaneras, born in Porreras, Spain on this day in 1969, was partnered with Isaac Gálvez in the Madison at the 2006 Six Days of Ghent - the meet at which Gálvez collided with Dimitri De Fauw, hit the railings and died (De Fauw suffered terrible depression after the accident and took his own life three years later). Llaneras, who started out as a road racer but subsequently decided to concentrate on track cycling, considered giving the sport up afterwards.

"It was the first reaction," he explained. "Logical... natural... Normal after what had happened, but life goes on, and giving it all up, unfortunately, will not solve anything. In addition, the track is my life, is my dream, my family, it is almost everything to me." The year after the tragedy, Llaneras returned to racing - and won the Points Race at the World Championships. He also won the same event at the 2008 Olympics, then retired.


The Swedish rider Fredrik Kessiakoff, having won his National Mountain Bike Championship four times, defected to road cycling in 2009 with a contract to ride with Fuji-Servetto, the team that became Geox-TMC. A year later, he switched to Garmin-Transitions (now Garmin-Barracuda) and then in 2011 to Astana - with whom he won the Tour of Austria.

Beñat Albizuri, born in Berriz, Euskadi on this day in 1981, joined Euskaltel-Euskadi as a trainee in 2005 and then earned himself a professional contract after he came second on a stage at the Vuelta a la Rioja. Unfortunately, his results in the following years were not impressive and the team released him at the end of 2008. He seems to have then vanished from cycling altogether.

On this day in 2009, Steve Peat beat fellow British rider Gee Atherton by 0.02" at the third round of the UCI World Cup and became officially the most successful professional downhill mountain biker of all time.

On this day in 1941, Alfred Letourneur used a Schwinn bike at the Los Angeles Speedway to set a new World Motor-paced Bicycle Speed Record at 175kph.