Racing
Tour of Chongming Island World Cup
Sunday's most important race takes place on Chongming Island in China and constituted the fifth round of the 2012 Women's Road World Cup - held since 2010, both earlier editions were won by Ina-Yoko Teutenberg, who also won the preceding stage race. As an alluvial island created by silt washed down Yangtze river, it's almost completely flat (the only climb and descent of any note if formed by a bridge and a tunnel) and suits the sprinters. (Map, profile, starters)

Running over 120.4km, the parcours began at the Oriental Sport Centre in Pudong and reached the first intermediate sprint after 29.1km, then entered the 8.4km Yangtze Tunnel 15km further on - with Chinese traffic and air pollution being as it is, the tunnel must have been an unpleasant experience for the riders, and the soaring Yangtze Bridge just beyond must have come as a welcome sight. 16.5km in length (including approaches) with a main span of 0.75km, it's the world's fifth longest cable-stayed bridge. With its long descent, the bridge could have been ideal for a break to get away and grab the points for the second intermediate sprint just around the corner and possibly stay out in front to the end, but in the end high winds kept the bunch together as they crossed onto Chongming.

The final 600m to the finish line was both straight and flat, promising an exciting sprint as numerous hopefuls battled for time in the limelight that, had birthday girl Marianne Vos (currently training in Tuscany) and several other World Cup contenders who have stayed away to concentrate on training regimes been here, they'd have had very little chance of getting. Shelley Olds (AA Drink-Leontien.nl) turned out to be the fastest, but only by a tiny margin margin - the non-selective course led to no fewer than 67 riders crossing the line in her group and recording the same time of 3h11'51". Melissa Hoskins, winner of the stage race overall General Classification, was second and Monia Baccaille (MCipollini-Giambenini-Gauss) third. Vos retains her World Cup lead with an advantage of 61 points over second place Judith Arndt.


Giro d'Italia Stage 8
Stage 8 was another medium mountain parcours (profile), this time over 229km between Sulmona and Lago Laceno. Sulmona - once home to the poet Ovid - lies on the flat and fertile Valle Peligna, formed when a prehistoric lake was filled in a a result of a series of earthquakes; but the riders headed skywards almost immediately as they climbed the uncategorised 1,284m Piano delle Cinque Miglia. One over the summit, the descent was gentle at first, then became steep before a short flat section followed by a smaller climb preceding a fast 10km descent to the foot of the day's first opportunity for King of the Mountains points, Cat 4 Valico di Macerone (684m, 61.9km). The middle section, from 65.5km to 197.3km, is hilly rather than mountainous with nothing too challenging, ideal ground for a break to get away and create a lead that might last; the highest point in this section (Montemerano, 836m, 193.5km) coming at the end of a long, rather than steep, climb. The last climb, Colle Molella, was far more difficult - from 212.2km it ascends 589m to the 1087m summit in 12.2km, giving an average gradient of only around 7%, but more like 12% at the steepest point according to Climbbybike. A small group of protestors attempted to stop the race at around the 60km to go point, but they were too few in numbers to prevent the police from confining them to the pavement as the riders sailed by.

This had always looked like a stage that could conceivably go to a sprinter; the final 3km were flat with a left-hand turn leading into the last 500m, though as the race entered its final phase it was obvious that Mark Cavendish (Sky), Taylor Phinney (BMC) and Theo Bos (Rabobank) were saving their legs for the flat stages to come. For a sprinter who can also hold his own in the hills, meanwhile, it was a happy hunting ground, and it was, therefore, not surprise at all to see Joaquim Rodriguez (Katusha) taking up position at the front of the peloton as the last climb hove into view, drafting all the way to conserve energy as the race picked up the pace to reel in the break - he had been many people's favourite today and obviously fancied his own chance too. In the end, though, he was simply to heavy to rival Domenico "Pint Size" Pozzovivo (Colnago), the little Italian's diminutive form enabling him to cruise past after attacking at the perfect moment jut as the last excapees were caught on the way up the Molella. Benat Intxausti (Movistar) gave chase, but he too was unable to get close. Since neither pursuer has the skills of a dedicated sprinter, Pozzo was unchallenged on the final flat section, crossing the line alone with a lead of 23". Ryder Hesjedal retains the GC leadership. 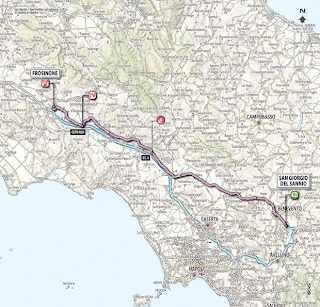 On Monday, the race returns to the flatlands again for a reasonably short 166km stage (profile) between San Giorgio del Sannio, beginning with a 244m descent over 8.6km (so expect a fast start!) and no hills of any note along the way. Whereas a couple of the earlier "flat" stages turned out to be rather more difficult than they looked on paper, today's stiffest climbs - 87m over 7km from Benevento (site of a Roman triumphal arch, considered the finest example of its type, and a Roman theatre) at the bottom of the initial descent and, at the other end of the stage, 86m over 6.9km into Frosinone - really shouldn't create problems. Combined with a a short descent leading into the last 2km, a right turn with 1.65km to go and then a left into the final 500m, it is likely to be another sprinter's stage.

Benevento is the most interesting city on the route: in addition to the Arch and theatre, it has numerous other monumental buildings ancient and modern including a Lombard castle. Sometimes known as la Città delle Streghe, the City of Witches, legend has it that witches from far and wide would meet to conduct rituals under a walnut tree hung with live snakes and engage in orgies with the devil in attendance. Frosinone looks to have once been a beautiful city, but little remained after it was struck by 56 bombing raids during the Second World War. Some old buildings survive and some of the new ones are good, but overall redevelopment has not been sympathetic and today the city is best known for its problems with air pollution which, in 2009, was twice as high as Rome.

Tour of California Stage 1
Stage 1 starts in Santa Rosa (home to three-time winner Levi Leipheimer, who is racing this year but will not contest the title due to ongoing problems with injuries caused when he was hit by a car earlier this year) and takes a 186.5km route first north, then west to the coast before heading south and east back to Santa Rosa. There are several climbs: an uncategorised 230m hill at 70km, three categorised hills rising to 457m (Cazadero and two climbs on Fort Ross Road, followed by a hairy descent) in a 20km section starting at 100km and a fifth to around 270m at 149km (Coleman Valley). At 175km, the parcours flattens out and rises only slightly on the approach to the finish line, meaning the stage is likely to end in a sprint. There are two intermediate sprints, the first coming after 52.2km, the second after 142.8km. (Map, profile)

Peter Sagan (Liquigas-Cannondale) won the stage despite being held up by a puncture with 10km to go and then having to avoid a crash in the final 3km. Daniel Oss did a superb job as lead-out man, enabling him to get past sprinter Heinrich Haussler (Garmin-Barracuda) and take the stage with a 4" lead.

Stage 2 begins in San Francisco Marina and passes the Golden Gate Bridge en route for the Pacific coastline, with the first of three intermediate sprints at Pacifica 27.9km into the race. The second is at Half Moon Bay after 41.6km, then the race continues south down the coast through San Matteo County and on to Santa Rosa County. Having turned north-east, the riders face a climb up Cat 1 Empire Grade to 800m after 112km, followed by a fast descent to the next climb beginning at 144.8km - Bear Creek Road, rising to 686m. The third sprint begins at 165.6km, then the race arrives at Soquel and, after a right turn at 188.3km, the final straight 200m to the finish line. (Map, profile)

"Portugal: One man on a bike in a land of beauty" (The Independent)

"The most inventive cycling innovations! (Times of India)

Mark Cavendish ‏ @MarkCavendishThe best thing about racing in Italy....? The fans!! I absolutely love them! The respect they have for the rainbow jersey is incredible.