Racing
GreenEDGE's new sponsor is far from Green
GreenEDGE's new sponsor has been revealed to be Orica, a chemicals company with an international presence as the world's largest producer of mining explosives - and an unenviable environmental track record that has seen the organisation widely criticised since 2011 for its apparent reluctance to notify the New South Wales Environmental Protection Agency whenever an accident occurs (for example, the six serious incidents between August and December last year; including the release of 1kg of carcinogenic hexavalent chromium into the environment at Kooragang Island on the 8th of August last year, a leak that affected 70 households and which Orica failed to report to the authorities for 16 hours - the people living in those 70 households didn't get to hear about it for three days; or the arsenic leaked into the Hunter River during the hexavalent chromium clean-up operation; or the 900kg of ammonia leaked into the atmosphere from the Kooragang Island plant, ironically one hour before the EPA announced it was going to take Orica to court over the hexavalent chromium leak; or the mercury leak in December 2011 at a Port Botany plant that drove airborne sample readings to 245% the legal limit, which Orica kept quiet about until the 17th of January 2011). 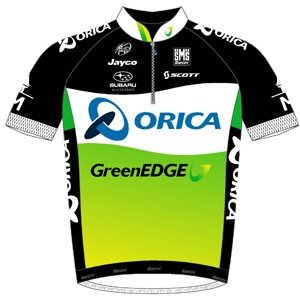 The deal was questioned as soon as it was announced, chiefly for the reasons outlined above. Many people have since pointed out that 1t4i didn't come under attack when they revealed their own sponsorship deal with the Argos North Sea Group, a Rotterdam-based oil company. However, they're missing the point - it's not what Orica do, but the way they go about it. The oil industry has much to answer for, but Argos have never been charged with the sort of cavalier attitudes and apparent total disregard for the environment and public safety that Orica have displayed in the past (Argos also trade in biodiesel - which isn't entirely "environmentally friendly" but is a damn sight better than standard diesel - and operate "green energy" supplier HummelEnergy, incidentally).

We all know that top-level cycle racing isn't quite as environmentally-sound as we'd like it to be - all those official cars and motorbikes chuck out some serious pollution, as do the helicopters at the major races and the airliners that take the teams to the races. Also, with the world economy in the state it's in, teams can't afford to be too choosy about whose buck they take - chances are one or two others wouldn't hold up too well under close examination, either. It's also possible that Orica have cleaned up their act after some bad years and are now a fine example of how a chemical company ought to behave, and that they want to get involved in cycling as an expression of their new, green policies; but the fact remains that as far as the public are concerned Orica are evil. GreenEDGE's decision to link itself with a company that, in the eyes of many, is the Australian version of Monty Burns' nuclear power plant might prove an unwise one if it results in difficulties attracting sponsors in the future due to loss of current popularity. After all,  we judge people by the company they keep, which is a concept that will be very familiar those GreenEDGE rides who spent 2011 with HTC-Highroad - a team that did more than most to stamp out doping, yet died because sponsors didn't wish to be associated with a sport that they believed was tainted by a bad image.

It would be a very great pity if a team that has already done so much for cycling - including women's cycling, which they have no more obligation to take part in than the various other Pro Teams that do not - turned out to have shot itself in the foot during their very first season.

New women's race
News about women's cycling is, these days, all too often depressing - as has been the case in recent weeks with the demise of two races and shortening of another as organisers have struggled to find the financial backing they need to continue their events.

Very welcome, therefore, is news of a new race: after sixteen years as a men's race, the Baby-Dump Kempenklassement in the Netherlands is to be joined by a women's class that will be named the Kempenklassement voor Vrouwen.

Tour of the Gila
The SRAM Tour of the Gila starts on Wednesday at Silver City in New Mexico. Since it began in 1987, the race has been dominated by American riders - American men have won eighteen editions, American women the same number - but changes to the UCI classification have brought ever-increasing numbers of top riders from elsewhere, as was the case last year when the men's race was won by the Spaniard Francisco Mancebo and the women's race by the Canadian Clara Hughes. Champion System - the first Asian ProTour team in cycling - will be making their American race debut at the event

There are some tough climbs along the way: Stage 2 reaches 2,278m above sea level, with the men and the women taking in the climb. Good quality maps and altitude profiles can be downloaded from the official race website, as can the complete "race bible."

Iglinsky denied rumours that his hotel room was searched prior to his unexpected winner of Liège-Bastogne-Liège earlier this year, then said he also has his sights set on the World Championships: "All cyclists want to win the World Championship. The one who wins earns the right to put on the rainbow jersey and can then ride in it for the whole year - it is very prestigious. Yes, I've thought about that, too; I will be training for the Championships."

Moser wins in Germany
Moreno Moser won Germany's biggest one-day race the Rund um den Finanzplatz Eschborn-Frankfurt after attacking the lead group in the final kilometre. The race was especially notable as the first since being injured during a training ride for the the current World Time Trial Champion Tony Martin, who split the peloton with an attack at the 44km to go point.

Moser's team mate Dominik Nerz was 5" behind him as he crossed the line, hotly pursued by Sergei Firsanov who took the same time.

Rabo and Astana at the Giro
Two more teams have revealed their Giro line-ups. Unsurprisingly, following his two stage wins at the Tour of Turkey, Theo Bos is team leader for Rabobank with Graeme Brown and Mark Renshaw onboard to pick up sprint points while Stef Clement looks after time trials and Juan Manuel Gárate takes care of the mountains. Protecting them and ferrying the bidons are Tom Leezer, Grischa Niermann, Tom-Jelte Slagter and Dennis van Winden.

Astana are sending Roman Kreuziger as leader, backed up by a more all-rounder squad consisting of Alexandr Dyachenko, Enrico Gasparotto, Simone Ponzi, Kevin Seeldraeyers and Andrey Zeits. Tanel Kangert, Evgeny Petrov and Paolo Tiralongo will be the men for the mountains points. The team comes as something of a surprise as the squad was widely expected to include Alexandre Vinokourov.

Three weeks off for Dehaes
Lotto-Belisol's Kenny Dehaes injured his elbow more severely than was initially believed in a crash at the Tour de Romandie - X-rays have since revealed a fracture, and he has been told to rest for three weeks.

No Giro for Dekker
Thomas Dekker (Garmin-Barracuda) is pinning his hopes on the Tour de France after doctors told him to stay away from the Giro due to a knee injury sustained at Liège-Bastogne-Liège. "Starting the race would just be too risky - I could be forced to abandon after a couple of days. There's no point starting a Grand Tour unless you're 100%," the Dutch 27-year-old said.

Colorado loses one of its two velodromes
Days after the great news that Cleveland in Ohio is about to get a new velodrome - one that will be free for under-18s to ride - comes more depressing news that one of only two velodromes in Colorado will close after only three years. The Boulder track, housed in a converted warehouse alongside an indoor mountain biking course, has attracted far fewer riders than predicted - "The single biggest factor was the seasonality," said Bruce McPherson, president of the facility's management team. "We had riders for essentially four months of the year. We had a core group that rode all year long, but it wasn't enough."

BBC R4 to broadcast Burton play
A dramatisation of Beryl Burton's life will be broadcast by BBC Radio 4 towards the end of this year. Titled La Yorkshire Dame a Bicyclette, the play will star Maxine Peake - who also wrote the script, her first - as Burton, who won numerous titles and set world records during the 1950s and 60s.

"Despite beating men and women in championships across the globe, Beryl received no support, training or sponsorship and in fact, very little acclaim in the UK and Maxine wanted to dramatise her story," says producer Justine Potter. No date has yet been set for the broadcast, but it is likely to go out in the station's 45-minute Afternoon Drama (formerly and popularly Afternoon Play) slot.

Radio 4 is available worldwide on the Internet.

"There’s absolutely no room for complacency, we have got to keep working hard" - Joanna Rowsell on the Olympics (British Cycling)

"74-year-old cycling enthusiast had a heart attack while competing in a 60-kilometre club race" (The Press, New Zealand)

"Tacks cause havoc at cycling event Tour of the South" (Herald Sun, Australia)


Cycling
Boris' big gob bothers bikers
Boris Johnson has based a large part of his London mayoral campaign on his own cycling credentials and the fine work he says he's done for the capital's cyclists during his time a mayor over the last five years - so it seems rather strange that he risked annoying the very people he's been courting for so long with some ill-advised comments yesterday at a hustings designed to highlight the candidates' commitment to cycling and cyclists' safety.

After showing up on his bike - points there, Boris - the tousel-headed Old Eonian scamp started to dig himself a hole. "I can humbly say to you, I may not conform to your idea of a stereotypical cyclist. I do not have whippet-thin brown legs or dreadlocks, I do not charge around in Lycra, I do not jump lights - and nor are you, but I ask you to recognise that I have cycling in my heart. I love cycling. I think it is wonderful and I will continue to invest in cycling," he told his audience, adding: "We have got to move away from the idea that - and I am sorry to say this, you can lynch me now - that cyclists are somehow morally superior to other road users" before the four main candidates went about trying to pick holes in one another's doubtless expertly massaged figures.

However, Johnson did promise that if re-elected he'll appoint a Cycling Commissioner (or cycling czar, as the newspapers have for some reason decided such a figure should be called) - something that many cyclists will be happy to hear. Provided, of course, that it's somebody capable of independent thought and with a genuine interest in cycling, not one of his jolly chums from school.

According to Londoners on Bikes, a biking advocacy group, he "has lost the bike vote."

Worldwide
"Cyclists will take to the roads in a silent procession at 7 p.m. May 16 to remember those who have been killed or injured by a motorist while cycling on public roadways" (Argus Press, Michigan)
Posted by john_orbea at 17:11