Why did Griffin really say what he said? 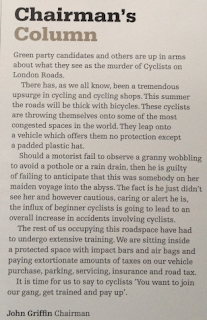 Most people will by now be aware that Addison Lee minicabs boss John Griffin has got himself into a bit of bother by claiming that cyclists should be considered responsible for their own injuries and/or deaths on London's roads simply because they choose to ride in "some of the most congested spaces in the world...[on] a vehicle which offers them no protection except a padded plastic hat."

Griffin has donated around a quarter of a million pounds to the Conservative Party (and now enjoys the business of six government departments in Whitehall, oddly enough), including £25,000 to Boris Johnson's 2008 mayoral election, which he seems to believe gives him the right to do pretty much whatever he wishes - such as earlier this week when he instructing his 2,200+ drivers to illegally use bus lanes (reserved for buses, licensed black cab taxis, cyclists and emergency vehicles) during the 20,000 journeys they make every day simply because he thinks it's unfair that his minicabs aren't allowed to do so - an instruction that Transport for London director Leon Daniels called "utterly irresponsible."

In addition, Griffin believes that cyclists should be forced to pay road tax; despite the fact that nobody in Britain has paid road tax since 1937, when it was abolished (he's unaware of this, apparently): "It is time for us to say to cyclists: 'You want to join our gang, get trained and pay up.'" he said in an editorial piece published in Addison Lee's Add Lib lifestyle magazine, copies of which are placed in the cabs for customers to read.

Hold on a minute there, John matey. Do cyclists want to join your gang? Er - well, no we don't, to be honest. In fact, quite the opposite, which is why we cycle instead of drive cars. We rather like the fact that our vehicles burn fat and save fuel while yours burn fuel and make you fat. We're quite happy with the way ours don't fart noxious fumes all over the place too (the same isn't true of our backsides, we admit that - if you spend any length of time in a racing crouch you've really got to let it out to avoid stomach cramps). What's more, we've been around for longer than you lot in your funny metal boxes. The bicycle has been around for almost two centuries, since 1817 when Baron von Drais invented what he called a Laufmaschine. In the early 1860s, two Frenchmen added a mechanical crank drive, thus creating something more akin to a modern bicycle. The first official bike race took place in 1868 (it wasn't the first unofficial race, of course - that would have taken place the first time there were two bikes in the same place). In 1885, John Kemp Starley introduced his Safety Bicycle, the first modern bike. The first car - which, arguably, has less in common with a modern car that Drais' Laufmaschine has with a modern bike, incidentally - was Karl Benz's Patent-Motorwagen, which didn't show up until 1886. So it looks like it was you car drivers who joined our gang, actually.

You know another reason we prefer cycling to driving? Because - as several studies have demonstrated - we can get from Point A to Point B in a busy city such as London considerably faster than cars can. Hence all those cycle couriers, police officers and even paramedics on bikes. Actually, come to think of it, the real reason you said what you said, which you now say you said to encourage debate and improve safety, wouldn't have been an attempt to frighten people off cycling in London because more and more are cottoning onto the advantages bikes have over cars and you're scared of losing business, would it?


London-based cyclists are (or anyone who can get there is) invited to join a mass "die-in" outside the company's headquarters on Monday the 23rd of April. Meet at 6pm on the corner of Stanhope Street/William Road (51°31'37.80"N 0° 8'27.00"W). Road accident cosmetics and fake blood are welcome. More details here.
Posted by john_orbea at 11:10