Rudi Altig became the first German winner in 1964 after battling against strong headwinds along the coastal sections to escape a powerful group of riders that included Rik van Looy who had won in 1959 and 1962, Tuur Decabooter who won in 1960 and Jo de Roo who would win a year later in 1965; building up a 4'05" lead by the time he crossed the finish line.

Jacky Durand was victorious in 1992, the first Frenchman to win the race since Jean Forestier in 1956. Durand was famous for his apparently suicidal breaks, which inspired Vélo magazine to publish a monthly Jackyometer keeping check of how much time he spent riding ahead of the pelton - this race was no different, and he broke away with Thomas Wegmüller with 217km still to go. Often, breaks like this fail because it takes less effort to ride in a peloton that it does alone or in a small group and the riders will tire quicker, but when it works the results are spectacular. On this occasion, it worked: Wegmüller used up his reserves and was unable to remain with the Frenchman as he sprinted to the finish and crossed the line alone. Some years later, he was stopped for speeding. The gendarme walked up to the window of his car, looked inside, and was speechless for a few moments. "You won Flanders in 1992," he told the rider, then let let him go.

1998 brought Johan Museeuw's record-equaling third win - no rider has managed to achieve the same since, though Museeuw's protégé Tom Boonen and Stijn Devolder both tried and managed two each; Devolder's second triumph coming on this day in 2009, when he complete race was shown live on television for the first time 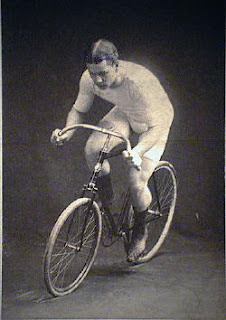 Kristof Vandewalle, born in Kortrijk, Belgiumon this day in 1985, won Stages 1 and 2 and the overall General Classification at the 2003 Tour de l'Avenir, then won Stage 3 at the same race a year later. His best results since have been at the 2010 Grosser Preis des Kantons Aargau semi-Classic, which he won, and 2nd place in Stage 18 at the 2011 Vuelta a Espana. In 2012, he will continue to ride with Quick Step following its merger with Omega Pharma-Lotto.