Racing
Greipel wins in Turkey
Lotto-Belisol's Andre Greipel won the second stage at the Tour of Turkey today (Monday), winning a sprint against Matthew Goss of GreenEDGE (who took second place for the second time in the race) after a very hot 153km ride along the coast from Alanya to Antalya featuring a tough climb to Aksu at 130km. Greipel's form appeared to take a dive over the last month or so after good results and six wins early in the year, so his cosy advantage as he crossed the line will have come as something of a relief to him and his team management.

Five riders led by Alexander Vinokourov (Astana) broke away early in the stage and remained out in front for the majority of the race, at one point achieving a lead of 4'30"; but they'd all been caught with 5km to go to the finish line. (Full results when available)

Tomorrow, the riders face another grueling 152km from Antalya, heading inland to the mountains and Elmali and twice climbing to more than 1,600m. (Stage 3 map and profile)


Berlin withdraws Tour bid
Success in Yorkshire's bid to host the start of the 2016 Tour de France comes a step closer today with an announcement made by the Sports Minister of Berlin stating that the German city will withdraw its own bid due to the high cost. Hosting the start would cost about ten million euros, "a damned high sum of money" says Andreas Statzkowksi. Instead, the city hopes to instead attract the World Track Championships, a far more affordable prospect at 1.5 million euros.

It's good news for Yorkshire, but bad news for cycling because, worryingly, doping was also part of the Berlin government's decision - according to newspaper Der Tagespiegel, "the Senate was encouraged to cancel the bid by the years of doping scandals in cycling... A World Indoor Championships would be worth more [to the city] than the Tour, which has been battered by doping scandals," an indication that despite the sport and the Tour taking up widespread measures that are frequently above and beyond what is required by the UCI and WADA to rid itself of the problem, the names of cycling and its greatest race are still tarnished. (More from Der Tagespiegel)

Contador case "Mr. X" was Liberty Seguros soigneur, says Spanish magazine
Mr. X - the mysterious figure who claimed to have seen Alberto Contador injecting himself at the 2005 Tour de France with insulin supplied by Dr. Eufemiano Fuentes - has been revealed as an ex-soigneur at the Spanish rider's then team Liberty Seguros by Spanish magazine Interviu.

Mr. X is understood to have been sworn in during the hearing and asked for anonymity, saying he was afraid for his own and his family's safety. However, his WADA-requested admission in the case was refused by the CAS after moves by Contador's legal team. The magazine does not say if it knows his identity, but it's surely only a matter of time before someone remembers who was working for the team that year. (More from Interviu.es)

Canadian Cycling teams up with Fast and Female to bring more girls into the sport
The Canadian Federation is working with Fast and Female to run an event at the Grand Prix Cycliste Gatineau, Canada's only women's UCI road race and time trial, on the 20th of May with the aim of encouraging girls and young women aged between 9 and 19 to take up competitive cycling. Tickets cost $20 (for which every attendee will receive lunch and a t-shirt valued at $40) and the event will feature various motivational activities including talks by famous riders including National Criterium Champion Leah Kirchmann. More details here.

Boost for British CX
British cyclo cross is due to receive a massive boost following an announcement made by British Cycling that a series of summer events will be held in Cumbria this year. Open to anyone who pays a small entrance fee, whether they ride a CX bike or a mountain bike, races at Ulverston, Ambleside, Whitehaven, Whinlatter, Sedbergh and Penrith are already confirmed and the Federation says more will be added if they prove successful.

Every venue will host races for under 10s, under 12s, under 14 and under 16s, women, juniors, seniors and veterans - and as a result will help introduce a wide range of people to one of the most accessible forms of competitive cycling and, with a bit of luck, result in some future champions. (More information from British Cycling)

Other Racing News
The 2012 Tour de France prologue - to be held in Liège and originally intended to be as identical as possible to that in 2004, when a 23-year-old Fabian Cancellara beat favourite Lance Armstrong by 3" - will have to be extended by 300m due to roadworks. The parcours will now be 6.4km in length. (More from Cycling News) 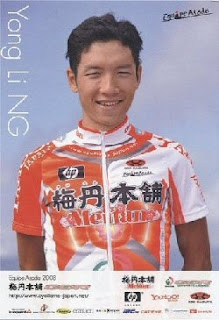 Malaysian National team member Ng Yong Li considers himself fortunate to have escaped with deep cuts to his back, arms and head after he was hit by a motorcycle during a training ride yesterday. "I was cycling alone and I don’t know how the motorcycle hit me as the road was clear,” says the 26-year-old, who became the first Malaysian rider ever signed to a European team with a contract from Portugal's Vitoria ASC in 2007. "Luckily there was a police patrol car passing by and they took me to the hospital - my back really hurts after the accident but luckily I don’t have any broken bones," he adds. (More from The Star Online)

Congratulations are due to The Daily Mirror which carries an article on paracycling's Sarah Storey this morning - a story about paracycling is a very welcome sight in the British tabloid newspapers, which have only begun to cover cycling at all over the last couple of years (largely inspired by The Sun, owned by Rupert Murdoch's News Corporation, which also owns 39.1% of Sky and thus has a vested interest in promoting the sport). That Storey happens to be very pleasing to look upon (there's a large-format portrait proving the fact) very likely helped encourage editors to go with the piece, but nevertheless: paracycling in the mainstream news = a good thing. (More from The Daily Mirror)

Gianni Meersman has recovered from the knee problem that has plagued the start of his 2012 season and hopes to perform well in the Tour di Romandie this week. I've now had three painless training rides, and I'm hoping it'll stay that way in competition," he told Het Nieuwesblad. "My form should not have been too badly affected by my short break from riding and it ought to be possible for me to get something from each Romandie stage." (More from Het Nieuwesblad)

Jerome Gilbert - little brother to BMC's Philippe - signed up to Accent Jobs-Willems Veranda's recently and made his professional debut at Liège-Bastogne-Liège last week. Now, the brothers are to compete against one another for the first time in a stage race, as both have been selected by their teams for the Ronde van België which begins in one month's time. (More from Het Nieuwesblad)

British cyclists plan to hold a "die-in" protest at 18:00 this evening outside the Central London offices of minicab firm Addison Lee this evening after boss John Griffin used the company's in-house magazine Add Lib to claim riders should be held responsible for their own misfortune when injured or killed on the capital's road because "throwing themselves onto some of the most congested spaces in the world...[on] a vehicle which offers them no protection except a padded plastic hat" is their own choice. Those who wish to take part should meet at the corner of Stanhope Street and William Road (51°31'37.80"N 0° 8'27.00"W). Pedestrians and responsible drivers are also welcome. More details here.

Annoyed at the authorities' lack of haste in providing cycle lanes and failure to consult cyclists when they do, Moscow cyclists took matters into their own hands by creating their own (RT)

Cycling deaths are raising concerns in New York City, with drivers who kill cyclists walking away without criminal charges laid against them (World News Australia)
Posted by john_orbea at 17:07