What next for Contador? "This is bad for cycling." Johan Bruyneel

Alberto Contador, the three-time Tour de France winner who tested positive for a miniscule trace of the banned drug Clenbuterol in 2010, has been found guilty by the Court for Arbitration in Sport and handed a two-year ban and will also be stripped of his 2010 Tour victory.

The ban will be backdated to the 25th of January 2011. As he was provisionally suspended for a period of five months during the initial investigation, he will be able to return to competition in August this year - too late for the Tour but in time for the Vuelta a Espana. Online betting sites have slashed odds of Cadel Evans winning a second Tour de France from 5/1 to 2/1.


"It’s an excessive punishment. It’s bad for everybody, for the reputation of cycling, for sponsors." Eddy Merckx

In view of the failure to disprove the rider's claim to have ingested the drug in contaminated beef, two years seems an unexpectedly harsh punishment - six months to a year was considered the most likely punishment by many. He is reported to have said he does not agree with the decision and will call a press conference in the near future and what he plans to do next should then become known: he may now decide to appeal; but having already spent a huge amount of money on lawyers he might also decide to accept the decision, especially now that the UCI are likely to be given the go ahead to fine him €2,485,000. In 2010, he said that if banned he would retire; but this seems an unlikely course now. 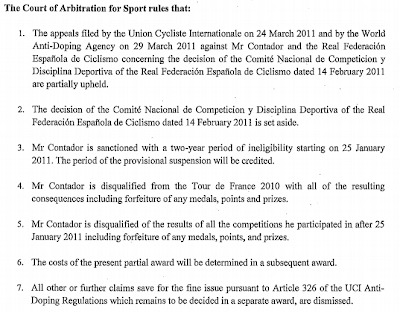 Andy Schleck now becomes the official winner of the 2010 Tour, but has said that he does not accept the title and will continue to consider Contador the rightful victor - and says he can win on his own merit. Contador's 2011 Giro d'Italia victory will also be disqualified, making Michele Scarponi the winner.