As tends to be the case with stage races, the Tour winds up right in the heart of the capital city for the fifth and final stage; and with human habitation in the Beijing region stretching back a quarter of a million years (Homo erectus pekinensis - remember those chaps from Stage 2?) and the city having served as political and cultural centre of a country as vast as China for many centuries, there's a lot of history packed into the parcours.

The roadbook once again gives a brief introduction, noting that when "tracing the history of Tiananmen Square, one cannot avoid mentioning the history and evolution of the ancient capital of Beijing." However, in this glossy  version of history, approved by a government that still bans all discussion of what happened, absolutely no mention is made of the year that made the Square infamous in the West: 1989 - when the government, afraid that peaceful, democratic protests were on the brink of becoming revolution, sent tanks and soldiers armed with assault rifles to attack unarmed civilians. 186 people are confirmed to have died - mostly on the streets nearby, rather than on the Square - but the true figure is still unknown. The Chinese government claims 241, but other estimates claim many more: according to Amnesty International, 1000; according to NATO, 7000; according to a document discovered following the fall of the Soviet Union, 10,000. The government in power in China today - the Communist Party of China - is still the same government that held power in 1989, and for all they now allow greater than ever before numbers of foreigners into the nation and make token nods towards democracy we should not forget that as recently as 2009, the 20th anniversary of the massacre, they still banned all protests, access by journalists to the Square and told all known dissidents in no uncertain terms to either leave Beijing or remain within their homes. Police shut down the Square and surrounding area during Stage 1, making fans pass through airport-style metal detectors and preventing large gatherings along the course, suggesting the security will be very tight during this stage. If protest disrupts proceedings, don't blame the protestors: some things are more important that a bike race. 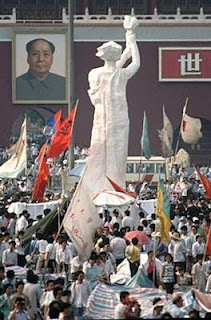 The riders set out from the north-eastern corner of the Mao Zedong Memorial Hall (39°54'5.80"N 116°23'33.89"E), metres away from where the 10m tall, hastily-assembled Goddess of Democracy stood for five days before she was toppled by a tank and smashed to pieces by soldiers. It's a short neutral zone today, with the race well under way by the time the riders hit Chang An East Road after a loop around the Square and up to the southern approach to the Forbidden City. The Imperial Palace for almost five centures, the City covers 720,000 square metres and contains almost a thousand bstructures; many of them part of what UNESCO has declared the finest collection of preserved ancient wooden buildings in the world. Note that almost all of them having yellow roofs - yellow being the colour of the Emperor in ancient China, just as it is in cycling.

After passing by the grand hotels and Audi dealership that symbolise modern Beijing as much as the Forbidden City symbolises ancient Beijing, Chang An East crosses Dongdan North Street and becomes Jianguomen Inner Street before reaching the East 2nd Ring Road, then changes name again to Jianguomen Outer Street and runs for 2.28km to the East 3rd Ring Road. There are many very fine buildings - mostly modern but some old - on both sides of the road, one of the most imposing being the vast white edifice of the Beijing International Hotel topped by a revolving restaurant. A little further ahead on the right are the LG Twin Towers, the 20th tallest buildings in Beijing at 141m - stacked end on end, they'd still stop far short of the tip of the tallest, the China Central Television Tower which can be seen from the Forbidden City and stretches to 405m.

The race travels between the Central Business District skyscrapers, then underneath an elevated section of the East 3rd Ring Road and turns right to follow a slip road up onto the northbound lane. If you notice anything other than the China Central TV HQ building along the initial section of the road, you have excellent powers of observation - the structure is one of the most eye-catching buildings anywhere in the world and can easily distract attention from everything surrounding it. Rather than taking the standard vertical skyscraper shape, it features six vertical and horizontal sections and is one of the most ambitious architectural projects ever attempted. The shape seen from ground level has led to its nickname, first used by taxi drivers, of 大裤衩 - "the big boxer shorts."

After another 900m, the peloton pass to the left of the Solidify Lake Park with its traditional Chinese landscaping and temples looking somewhat at odds with the ultra-modern tall buildings surrounding it, then the Agricultural Museum a short while later before the route crosses the the wide Liangma River. The road bends to the left, passing over the Airport Expressway and a strangely, geometrically attractive interchange - at which point it becomes the North 3rd Ring Road East, soon bending left again and traveling underneath the Daguang Expressway. The peloton will continue for 2.9km, then arriving at a slip road leading up onto Beichen Road (39°58'2.46"N 116°23'28.63"E).

On the left is a futuristic dome and a modern, spiral-shaped building, the two halls of the China Science and Technology Museum. A short way ahead, the race enters the Yuan Dynasty Capital City Wall Ruins Park, one of the very few places where Beijing's medieval defences can still be seen. Directly ahead, twin sculptures consisting of white marble bases with red top sections mark the entrance into the circuit 18km from the start on Beitucheng Road. It will be completed a total of twelve times with intermediate sprints beginning the second, sixth and ninth times the riders cross the finish line by the Water Cube.

Taking the road to the right of the sculptures, the riders continue north for 1.17km past the Yingdong Natatorium, more correctly known as the Ying Tung Natatorium after Henry Fok Ying Tung, a Beijing businessman who left a huge sum of cash so that the earlier buildings on the site - dating from the 1990 Asian Games - could be extended and developed to host some of the Olympics swimming events. They cross the North 4th Ring Road via the Beichen Bridge, then turn right onto the road immediately south of the Bird's Nest Stadium and follow part of the route used in the Stage 1 time trial in reverse, turning left after 390m for Hujing Road. 1.95km further on, they turn left onto Kehui South Road and continue for 520m west to another left onto Tianchen East Road. The finish line is in the same place as it was for Stage 1, 1.94km ahead at the East Gate of the Water Cube (39°59'26.97"N 116°23'7.86"E).

For the first eleven circuits, the riders will continue straight over the finish line for 300m before turning left 82m later back onto Beichen Road, this time taking the carriageway to the west for 1.38km back over the North 4th Ring Road and as far as Beitucheng Road where they'll turn 180 degrees around the sculptures to begin a new circuit. Each complete circuit is 8km in length, which combined with the initial 18km section and final section to the finish line, the riders will have covered 118km at the end.


Tour of Beijing Preview, News and Guides
Posted by john_orbea at 16:41