She Pedals no more 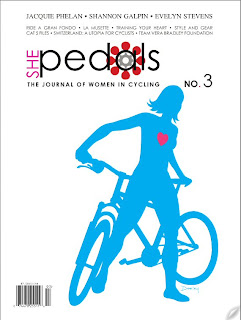 Having noticed a lack of cycling magazines aimed at women, track cyclist Dena Eaton took matters into her own hands and launched one. She Pedals seemed destined to become a hit - with more and more women taking up the sport every year, either competitively or as part of a fitness program - anyone would have thought that the title would soon build up a considerable and loyal following around the world. Sadly, it was not to be so; after two years in which the magazine made its way into a handful of Barnes&Noble bookshops and independents, even the subscriptions that made up the vast bulk of readership proved insufficient and the title has closed.

"I've used up most of my savings trying to do this and it’s time to go on to other pursuits," Eaton told the publication's 1500 Facebook fans, citing continued lack of support as the reason.

In the early days, She Pedals was entirely devoted to cycling with a range of articles on bikes, nutrition, fitness, rides and female riders/industry figures. However, that lack of support forced Eaton to rebrand the California-based magazine as Endure and include articles on swimming and running in an attempt to appeal to the triathlete market.

Could She Pedals have been viable? Probably. Even the upper echelons of the professional women's cycling world are virtually ignored by the established cycling press, yet more fans than ever before follow the sport and more women than ever before are riding bikes. It's still at grassroots level, but there's a definite sense of change in the air with new women's teams coming together; a feeling that maybe next year, perhaps the year after that, it's going to explode and finally receive the recognition, sponsorship and respect it's deserved for so long. At present the magazine trade is unaware of how large the market has the potential to become - had it have been otherwise, She Pedals would have been out there in more shops and more copies would have sold.

There'll be plenty of women's cycling magazines on the shelves in two years' time. She Pedals was just too ahead of its time.
Posted by john_orbea at 10:39