For full-size YouTube loveliness, click here
Ladies and gentlemen, we have seen the saddle that supports the posterior of Posthuma. We nearly got run over by the LeopardTrek bus. We have breathed air that mere seconds before was wafting through the main triangle of Geraint Thomas' Pinarello - and yea, it was sweetly-scented. We even nearly saw Mark Cavendish, but did not for fear that our mortal eyes might burn up, such is his radiance - and anyway, the crowds round the HTC-Highroad bus were about two hundred deep.

"Impressive! I haven't seen so many spectators for a bike race in UK since TourDeFrance2007. So much support! Thanks everyone for turning out" (@MarkCavendish, Twitter, 15:45 17.08.11)

Being based in Cambridge, it was the work of mere seconds for the Cyclopunk office to be shoved in a rucksack and prepared for a quick train jouney (approximately 35 minutes for the sum of £9.20 - honestly, how exactly are the government encouraging people to use public transport? Occasional Cyclopunk contributor Simon's Nissan Micra can do the same journey for half that cost) as we got ourselves down to Bury St. Edmunds for a look at the start of Stage 7 of this year's Tour of Britain. 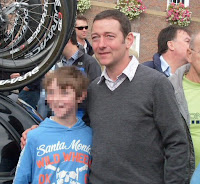 Angel Hill, between the town's attractive centre and Abbeygate, all that remains of the once vast and enormously wealthy abbey which dominated west Suffolk in the middle ages, was packed with literally thousands of people. Many were cyclists but the majority were not, just people out to see the show. Children were all over the place, one looking absolutely made up to meet Ned Boulting, waving little Tour flags and apparently having a great time - hopefully, that's another generation of fans confirmed.


One of the finest things about professional cycling is that fans can mingle with their heroes - there's none of the VIP area nonsense and burly security guards separating stars from proles as is normal in any other sporting event at this sort of level; this being very much the case here as we were freely able to wonder around the buses and team cars, getting up close to bikes worth more than the combined value of our internal organs (obviously not including our livers which are of virtually no value at all, except perhaps as replacements for Paris-Roubaix pavé).

Pervading throughout was a certain sense of excitement based on the knowledge that this was going to be good, a sense that - as a veteran of countless Glastonburies and similar events - was instantly recognisable as Festival Atmosphere. That's something I've never felt at a British race before: SweetSpot have performed an absolutely excellent job of combining racing with entertainment, finding and applying the magic formula that the French have known for so long.

The full album (80 images of the race, associated stuff and Bury St. Edmunds)