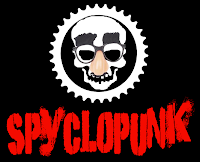 The annual Society of the Home, Innovation and Technology awards gala is one of London's premier design industry events in which inventors, developers and marketing experts come together to celebrate dazzling new gadgets. Each year, a list of over a thousand new products is submitted to the judges who then whittle them down to just twelve that, in their opinion, will revolutionise daily life. It's a white tie, couture frock, glitzy and glamourous party - which is why security wouldn't let us in to have a look at any of the new bike stuff on display.

We'd heard about ARS; an incredible and entirely novel anti-theft device for bicycles which, according to the judges, demonstrates "blue sky, out-of-the-box imagineering by a team not afraid to use cutting-edge creaovation techniques in order to develop integethical new concepts." That's why we decided we needed to know more: because, well, we had no idea what on earth that actually meant.

"Of course, we were dazzled by the wafer-thin HD audio-visual kitchen implements, the biodegradable olive stoners and hydrorobotic parallel parking safety warnings," says chief Society judge Mikael Foray-Stout. "However, this device is so stunning in its simple effectiveness that there was really no contest. Our focus group agreed, saying that many people who would otherwise utilise bicycles for short journeys in the urban environment are discouraged from doing so due to the necessity of carrying a heavy lock, whereas this device puts paid to that - it entirely neutralises that need and safeguards the owner's property."

Cyclopunk got in contact with the device's manufacturer, Capt. Ruff's BikeCo Ltd of South Safeytor Headland, Lancs., but were unable to speak to anyone at the firm; learning from their answerphone message that they'd all gone down t'pub for lunch. After calling again the next morning, we were still unable to learn anything about the system because, in the words of employee Eli Grimthorpe, "Ah don't trust ye, ye lager-drinkin' soothern pansy. It's a simple design and ye'd probably steal it."

As regular readers will be well aware, here at Cyclopunk we employ only the finest journalists we can persuade to work for nothing, and the finest of them all is Spyclopunk. Once resident disguise expert at the SAS (which he takes great care to point out does not refer to the Swan and Stag public house), Spyclopunk uses his masterful skills to infiltrate the most covert echelons of the bike industry and make this website the very best for those discerning readers who want the latest news before any of the others have it.

Arming himself with a whippet and some pigeons, Spyclopunk was parachuted into deepest, darkest Oop North from the staff helicopter late at night last week (with the ace pilot stopping only briefly on the way to buy a road map from the Little Chef near Shiptonthorpe after realising he was lost, later making a brief stop on the outskirts of Manchester for a packet of fags). Having landed cat-like on the roof, Spyclopunk used his amazing ninja skills to gain admittance to the state-of-the-art Capt. Ruff's factory via an air conditioning duct ("And I think I'd better lay off the pies for a bit," he later said, "it's down to sheer luck and my excess perspiration problem that I didn't become permanently wedged down it.") He soon found his way into the underground research and development laboratories, where he managed to retrieve a blueprint.

"The device is genius in its simplicity," he continues. "Basically, to the casual observer - ie, you and not a clever scientist like me - the device will look almost indistinguishable from a standard bike saddle and seat post when fitted to a bike. It features the ARS unit itself, which is fitted between the saddle rails where it can't be seen and is wired to sensors within the padding - this works rather like a retina scan, making a comparison between the buttocks of the person sitting on the bike and an image pre-programmed into the unit. I'm not yet certain what features it's built to recognise; probably pimples, hairiness, odour and suchlike.

"Now, the secondary function is where it gets really clever. Having made its comparison, it utilises an algorithm in order to determine whether or not the buttocks belong to the bike's owner. If a certain match - say 80% - is achieved, then it does nothing. However, any less than that and it sends an electronic signal to a device fitted within the special seat pillar. This then releases a firing pin, detonating an large gauge shotgun cartridge and sending several grams of red-hot lead pellets up the would-be thief's jacksie."

We later spoke to a public health and safety department spokesperson to enquire as to whether or not such a device could be legally sold in the United Kingdom. "Well, the company are seeking official approval at the moment, so I can't really comment," she told us. "However, as a keen cyclist and victim of at least five bike thieves over the years myself, I bloody hope so."
Posted by john_orbea at 17:07