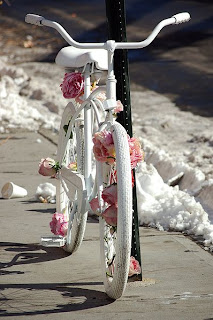 Some readers will be aware that, when not writing about cycling and attempting to control our four ferrets, I've also been setting up a very loosely-organised group here in Cambridge with the aim of creating some ghost bike memorials around the city, both to commemorate our fallen friends and to increase awareness of cyclists among drivers and the need to ride safely among cyclists.

Recently, I was contacted by a journalist from the Cambridge News paper, wanting to an article on ghost bikes and the group. Initially, since the group is at present a blog, a Facebook page and a few people showing interest, I was reluctant; but agreed in the hope of spreading the word.

The article was published today and can be read here. My thoughts upon it are here.
Posted by john_orbea at 11:14