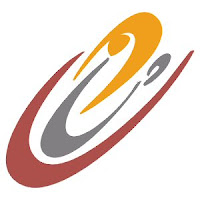 STAGE PREVIEWS NOW AVAILABLE. Click here for more!
The Tour de France is the one race that everyone - even those with no interest in cycling - has heard of, partly for the sheer scale of the event and partly because in its 108 year history it's become such an important and spectacular part of French, then European and latterly world culture. Yet it tends to be only cyclists who are aware that there are two more Grand Tours in every year: the Giro d'Italia in May, which is becoming better known due in part to the controversy over the very difficult parcours in 2011, and the Vuelta a España which this year takes place from the 20th of August.

The Vuelta began life in 1935, organisers drawing inspiration from the Tour and Giro; and from the enormous sales boost the newspapers that ran them received each year when the races were in progress - it will come as no surprise that it was originally created and run in the early days by the Informaciones, a Spanish daily. It was an immediate success and that first year saw one of the all-time great duels in cycling as Belgium's Gustaaf Dellor (for whom being a cyclist proved fortunate - during WW2 he was captured by the Germans and managed to get relatively easy work allocated to him in the prisoner of war camp within which he spent the rest of the conflict due to the officer in charge being a cycling fan) and the Spaniard Mariano Cañardo who had come 9th overall in the previous year's Tour. Deloor was the eventual victor, as he was when the rivalry started up again the following year. In 1937, the Spanish Civil War was in full swing and the race could not be held, making a reappearance in 1942/43 before WW2 put another temporary halt to it. It ran again between 1945 and 1948, missed a year in 1949, was raced in 1950 and then not held for four years until 1955 when it came under the ownership of El Correo and Basque People newspapers which ran it as an annual event, despite financial difficulties and a terrorist attack in 1968 which saw the race abandoned, right up until 1979 when it was taken over by publicity agents Unipublic who continue to run it to this day.

As a UCI Grand Tour, points on offer towards a cyclist's rankings are much higher than in other races. Whereas most UCI Tours have a maximum of 100 points for an overall General Classification victory, the Vuelta and Giro offer 170 - only the Tour, with 200, is higher. Only five riders have won the Vuelta, Giro and Tour in their careers: Jacques Anquetil, Felice Gimondi, Eddy Merckx, Bernard Hinault and Alberto Contador.

Nobody has won all three in a single year - indeed, very few are even capable of entering all three; just 37 riders have managed to complete the three; doing so would be considered by many the greatest possible feat in professional cycling and would create controversy as to whether or not the cyclist who achieved such a distinction would be eligible for the Triple Crown, currently for those who have won the Tour, the Giro and the World Championships in a single year. Though an unofficial title with no prize, the Triple Crown is seen as the ultimate achievement in the sport and only Eddy Merckx and Stephen Roche have ever managed it as a Tour/Giro/Worlds combination. Saxobank Sungard team manager Bjarne Riis revealed his belief that Alberto Contador was capable of winning all three Grand Tours in 2010, which led Andy Schleck to reveal his own belief that doing so is impossible in response.

Though both have a far lower profile than the Tour - non-cycling newspapers report on the Tour, especially if one of their country's natives is doing well - they never report on the Giro or Vuelta, so in order to obtain information fans have to buy cycling magazines or keep an eye on the Internet. Here in the United Kingdom, it's beginning to look like this might change: the UK is falling in love with cycling and Bradley Wiggins' Critérium du Dauphiné success this year even made the primetime national news broadcasts, though few Muggles (non-cyclists!) had any idea of what the Dauphiné actually is - I spent quite a bit of time in the pub trying to explain to people that no, it's not the Tour de France and yes, there are actually quite a lot of races other than the Tour de France.

Bradley's popularity may be instrumental in increasing the Vuelta's profile here, because provided the collar bone he broke in the early stages of the Tour has repaired by then, he's a favourite to win it and if he does so would become the first British rider to ever win a Grand Tour, virtually guaranteeing reports on television news and in the newspapers and, well - who knows? It might also, perhaps, create a revived Muggle interest in our own homegrown races, which have been largely forgotten ever since the Milk Race caught  the public's imagination back in the early 1980s and that weird kid in Mrs. Watson's class who talked about gear inches instead of He-Man and eschewed E.T. stickers for photographs of Bernard Hinault suddenly became Milton Primary School's resident cycling guru and increased his circle of friends by magnitudes. That was a good fortnight, that was.

Unfortunately, despite being invited and the race taking place on his home soil, Alberto Contador will not be taking part. It took much longer than he expected to recover from the Giro d'Italia this year and with the Tour de France ending less than a month before the fun kicks off in Spain he might not be race-fit. It also comes just ten days after his appearance before the Court for Arbitration in Sport, when he must defend himself against doping charges despite increasing acceptance - and evidence - that the positive sample he provided during a rest day in last year's Tour was the result of eating meat contaminated with Clenbuterol, a drug with little benefit for cyclists but considerable benefit to beef farmers who use it illegally to promote lean muscle growth in their animals.

The Vuelta has been a part of the cycling calendar since 1935, when fifty cyclists tackled 3411km in two weeks. Like the Tour and the Giro, the course has changed every year and consists of both flat and mountain stages, often using roads in the Pyrenees covered by the Tour and frequently making excursions into France just as the Tour does into Spain. This year, it features nine flat stages, ten mountain stages with six summit finishes, one individual time trial and one team time trial. The combined 21 stages will cover 3300km and at its highest point , the peloton will climb to 2130m. In common with the French and Italian Grand Tours, the parcours is designed not just to test the riders but will also wind its way about the countryside with the express purpose of showing of the beauty of Spain and will pass through many areas of great natural charm and by several sites of historical importance.

The 2011 Vuelta - the 66th - is the first one since 1978 to visit Euskadi, the Basque Country, where problems have been experienced in years gone by due to separatist groups including ETA who have in the past targeted cycling events, most recently in 2007 when two small explosive devices in plastic lunchboxes were placed either side of a road before the Tour de France passed through. In 1978, separatists disrupted the Vuelta by blocking the road with crowd barriers and threatened to set about riders with metal bars and clubs, but earlier this ETA declared a permanent ceasefire and emphasised their new commitment to end violence in the region, leaving organisers confident that the race can visit the region without the potential for problems after a great deal of lobbying and reassurance by the Basque Government. This is excellent news for the locals as cycling is perhaps even more popular among the Basques, for whom the Euskaltel-Euskadi team are national heroes, and equally so for cycling fans around the world; Euskadi is largely mountainous with a rocky coastline and will undoubtedly be one of the most beautiful parts of the race.

Stage 1, a time trial, will be held in the early evening  in and around Benidorm - not during darkness as was suggested by early reports (including ours) stating that it would be a night stage (the Tour abolished night stages in 1905 after riders used cover of darkness to get away with various cheating, including attaching corks by wire to cars and then holding them between their teeth so as to be towed, and most other races have followed suit). The majority of the riders, upon seeing the route when it was announced in January this year, described it difficult - "It's a very hard Vuelta," said 2010 winner Vincenzo Nibali. Two of the summit finishes are mountains never before climbed in the race, making them an unknown quantity - and it will once again climb the notorious Alto de l'Angliru. With its 12.5km, 1226m ascent at an average gradient of 10.3% the mountain is considered to be among the most challenging sections of any professional cycle race and feared more than Mont Ventoux by some. The steepest part of the climb is an incredible 23.5%, which has left riders without support in the past after team cars stalled and were unable to follow them. 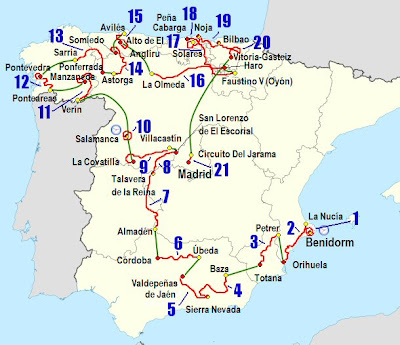 The Vuelta also invites a number of wildcard teams. This year, two from Spain and one each from France and the Netherlands will be competing.


The 21stages are as follows:


We'll be bringing you stage-by-stage previews for each day of the race with details, local history, sights and things to look out for along with predictions and comments similar to those we provided for the Tours de Suisse and France earlier in the summer.
Posted by john_orbea at 12:43