We remain in the Massif Central for Stage 9 and while there none of the huge Category 1 and Hors-Categorie climbs in the Pyrenees and in the Alps, there are so many climbs today packed into the 208km that the cumulative impact upon the riders is considerable. In fact, there are no less than three Cat 2s, three Cat 3s and two Cat 4s - and since the average elevation is high, all but one of the Cat 3s and all the Cat 3s are well over 1000m above sea level, which adds the effects of altitude into an already challenging mix.

The start line is in Issoire, a town that has been famous since Roman times and somehow retains a very Romanesque appearance. In those days, it was primarily famous for its schools while these days it is perhaps best known for the Église Saint-Austremoine church, the light aircraft industry and for Voxan, the only French motorcycle manufacturer, which is based here. It's located at an altitude of 410m, by far the lowest point of the stage, and has been a stage town three times in the past. Heading out of town is the flattest part of the parcours, a 40km section that rises no more than 50m or so. This is a section that, as was the case with the first few kilometres yesterday, is likely to encourage a breakaway - but whether or not any such group can keep going for a s long as they did yesterday is debatable; yesterday saw an exceptional ride by Costa and his leading group, not an everyday occurrence.

This being La France, there is much of beauty to be looked at and drooled over en route, particular highlights being the chateau at Léotoing. No aristocrat's sugar-craft fantasy, this one's the real-deal - standing high above its surrounds on a rocky crag, it commands a wide area and exists to resist attack, not to impress people in powdered wigs. As we pass through Grenier-Montgon there is some equally imposing but far more modern architecture, the Viaduct de la Violette which carries the A75 autoroute high above the countryside. The French seem to really go in for these enormous bridges which would incur NIMBYish wrath anywhere in the UK where people would hate them - personally, I think they add to the landscape.

That's it as far as flatlands go, though - at 43.5km we reach the imposing Cat 3 climb of Côte de Massiac. Don't nip off for a nature break just yet, though - you need to keep watching as the Tour passes through Massiac itself, because Massiac is the location of one of the most arresting and beautiful sights in the whole of France: the tiny Chapelle Sainte-Madeleine de Chalet which stands alone on an outcrop high above the town. Dating from the 12th Century, it once belonged to a castle which no longer stands and is often used as a symbol of the Haute-Auvergne region.

The climb lasts for 3.4km and has an average gradient of 6.2%, which seems rather steep for a Cat 3 so the road must be of good quality. It doesn't mark the top of the hill, though - the route continues upwards to around 1050m. Coming at an early stage in the day, this is an opportunity for the relatively unknown domestique climbers to get themselves in front of the cameras which in turn is an opportunity for us to see the up-and-coming grimpeurs, the Schlecks and Contadors of the future. It is a section to which it's well worth paying attention. If there has been a breakaway by a group without the strength to keep going on this sort of terrain, those neophyte climbers may well chase them down and establish a lead here. However, a group made up of strong riders could increase their advantage here as the peloton slows and the real big-hitter climbers among the General Classification contenders continue saving energy and checking one another's form.

At the top is a rolling plateau, towards the end of which is Dienne. Dienne is home to Le rocher de Laqueuille which is said to resemble a sphinx keeping watch over the town (perhaps it helps if you eat plenty of the local cheese before looking) and the Chateau de la Cheyrelle which unlike Léotoing is well within the gateaux chateaux category: it's pretty and it looks a bit like a castle, but it wouldn't last two minutes if besieged. Today the village is also playing host to the feeding station which comes at 81.5km point. Nearby, as the route reaches Lavigierie, is le Puy Mary; the remains of what was once the largest composite volcano (ie, the classical, conical volcano formed by many layers of hardened ash and lava) in Europe. The highest point is 1783m above sea level, while the road passes 194m below. This is the first of the day's Category 2 climbs, 7.7km at 6.2%, and the scenery will be spectacular. Chances are that Andy Schleck and Alberto Contador will be sounding one another out here: Contador isn't having a good year and many people seem to have written him off, but Schleck is cleverer than that - he knows what Contador is capable of doing on a climb and will be wanting to examine his old rival's form in order to work out what he's going to have to do to beat him.

Once they reach the top, it's only another 16.5 km to the next Cat 2 at the Col du Perthus - with an altitude reaching 1309m, it should not be confused with its namesake in the Pyrenees which tops out at a little over 200m. The riders will ascend the mountain via its western face, considered the most difficult with maximum gradients of up to 10% according to Le Monde. The views are superb, especially across the village of Saint-Jacques-des-Blats, but the riders won't have much time to enjoy them because they need to get down into the village and ready themselves for the 1294m Col de Cère which is less than 8km away. The region is famous for the steep-sided gorges which have attracted tourists and watersports enthusiasts (not that kind, pervert) for over a century.

The parcours then drops downhill for around 12km - a much-needed rest for the knees - taking in Laveissière along the way. In the village is Maison de la Roche, a strange little cottage which has been built around a natural basalt menhir. It's then skywards again on the climb up to the Côte de la Chevade, a small but steep Cat 3 which reaches 1162m. The nearby Château d'Anterroches dates from the 15th Century and was originally a stronghold but has been remodeled over the years so that it's now an imposing stately home with a castle-like appearance. The nearby Eglise Saint-Pierre de Bredons is also not to be missed - standing high above the valley, it's an obvious target for the helicopter cameras.

With 54km to go, we come to Col de Prat de Bouc, the last Cat 2 climb of the day which at 1392m is the second highest point of the stage. Last visited in 2004 when grimpeur extraordinaire Richard Virenque was the first to reach the top, this is a climb notorious for having very little shade and so it can become very hot towards the summit, making what would not be an especially difficult climb a challenge worthy of respect. Riders who have not paced themselves may decide not to proceed here, and if a breakaway has survived this long it seems an obvious place for them to be caught.

From here, the remaining 54km is mostly downhill and passes through some picturesque countryside on the way to Neuvéglise, a plateau at 938m above sea level which is the location of this stage's intermediate sprint. Effects of altitude are only taken into account on climbs higher than a thousand metres, but 938m is close enough for the sprint to be more difficult than most. It's likely to be a fast one, coming at the end of a long descent. 25km further on is the penultimate climb at Côte du Château d'Alleuze, a short 4.9% gradient which would not normally be an issue but which will undoubtedly not be a welcome sight by this point in the game. It's then primarily downhill to the finish line, apart from a final Cat 4 climb of about 135m to Saint-Flour, a town unusual in that it is split over two levels - the upper part is on the Planèze, a plateau at an altitude of around 900m, and the lower in the valley below.

Predictions: Who knows on a stage such as this one? It seems like one for the climbing specialists, but so did yesterday when the breakaway group dominated the race right from the start and a virtual unknown eventually won after putting in a heroic effort. At the time of writing, no such group has formed and the peloton seems to be reserving strength for the mountains, but any group that gains an advantage on the first climb may try to stay out ahead in an attempt to give themselves a chance against the grimpeurs. On the other hand, the grimpeurs might decide that today is the day they're going to start their battle - it could even turn out to be a Contador v. Schleck match. If it doesn't, we'll put our money on someone from Euskaltel-Euskadi again, perhaps Sammy Sanchez. But if so, we think it'll be Schleck all the way. 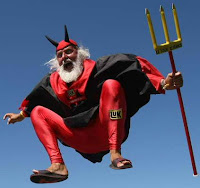 DEVIL WATCH: Also a difficult one as there are so many climbs today, and he could be lurking upon any one of them. He might favour the high point at Le Puy Mary (and a volcano seems a fitting place for a devil), but he might prefer somewhere closer to the end such as the Col de Prat de Bouc. As ever, keep a watch on the road surface - if you see tridents painted on the tarmac, you can be sure that he is somewhere nearby.
Posted by john_orbea at 12:10