Another day of carnage in a Tour de France that is beginning to look like Henri Desgrange's ideal: one in which only one rider finishes.


One crash, in which a number of riders came off the road while descending Puy Mary and down a steep bank, accounted for three. Jurgen van de Broeck, looking dazed and concussed with a bloody wound on one leg, attempted to continue but didn't more than a few kilometres before the pain of a suspected broken scapula forced him to stop. David Zabriskie, also stunned, sustained a broken wrist. Christian Vendevelde, who had to abandon last year with broken ribs, also had to throw in the towel, as did van den Broeck's team mate Frederik Willems, which means that as Jurgen van der Walle has already gone Omega-Pharma Lotto have already lost one third of their riders.

Perhaps worst injured was Alexander Vinokourov with a broken femur, possible broken pelvis and according to early reports a possible broken shoulder. Unable to walk as he was lifted to the road by a medic and an Astana team mate - raising the horrible suspicion that he had broken his back - the 37-year-old Kazakh rider was due to retire at the end of this season, but it looks like that decision has now been brought forward. Later on, a French TV camera car attempted to overtake the breakaway group along the roadside verge - the driver failed to spot a tree and swerved to miss it rather than slamming on the brakes and took out Juan Antonio Flecha and Johnny Hoogerland. Both men went down hard - Flecha took the worst impact while Hoogerland went over the top of him and into a barbed wire fence. Both men lost a lot of time and with 35km to go had no prospect of catching up, raising the potential of disqualification due to exceeding the time limit - however, even the ASO aren't that heartless and soon announced that not only would they be waiving the rule should the limit be reached, they were also taking the highly unusually step of awarding both men the stage's Combativity award after they got back on their bikes and rode together to the finish line, a sight destined to become one of the greatest Tour moments. Hoogerlands also took the King of the Mountains award after a superb ride earlier in the day.

In an earlier incident, Alberto Contador crashed and landed hard, visibly suffering a painful hip. Later, a video appeared online which appeared to show him being deliberately pushed by Katusha leader Vladimir Karpets. Contador, still embroiled in an ongoing battle to clear his name following a questionable positive anti-dope test, is not a popular man at all at present; but it seems cycling fans are on the whole a reasonably fair-minded bunch because about 99% of the ones on Twitter immediate called for Karpets to be thrown out of the Tour. Once it was pointed out by various others, including blogger Inrng and ourselves, that the video had been shot from an angle that really showed very little at all the majority settled down and waited for further information to come through. Contador explained all once the race was over: "I got my handlebar tangled up with his seat. I got knocked off balance and crashed," he told reporters waiting at the finish and desperately hoping for a juicy vendetta.

The question is, where do we go from here? Should the Tour be made slower, safer, less exciting? Or should we revel in the fact that, alone among developed nations, France continues to allow adults to risk life and limb in the pursuit of this great spectacle, the greatest sporting event the world has ever seen?


"I think these crashes, they're part of the sport - I don't think there's more crashes than before." (Philippe Gilbert)

The best games are those in which skill and luck both play a part. Cycling is a very dangerous sport - it always has been, whether or not it's become more dangerous or not is a matter for debate - but like Giro d'Italia boss Angelo Zomegnan says, "they can stay at home if the prefer." Nobody is forced to do it against their will. In fact, the complete opposite is true - there is no way anyone will ever become good enough to compete in professional cycling unless they adore the sport.

The future development of safety equipment such as helmets should and will continue and perhaps there is even a case for looking at the number of riders entered into the Tour each year since many crashes seem to be caused by simply by over-crowded roads, but those who compete know the risks and this mad, dangerous, beautiful event must never be slowed down.


Anyway, the race was once again characterised by a breakaway group. An early attempt led by Lieuwe Westra failed quickly, being caught within 7km during the first flatter sections, but another formed after a crash involving David Millar and three others when Thomas Voeckler attacked and managed to split the peloton into three parts. Several riders went with him but were soon dropped, eventually leaving him with Flecha and Hoogerland nad the three remained around 15" ahead of Luis-Leon Sanchez, Sandy Casar and Niki Terpstra for some time with the peloton a minute behind the leaders. At about the same time, Wouter Poels abandoned.

By around 13:32, Sanchez and co. had caught Voeckler's group and the riders worked together to increase their lead as the peloton regrouped, soon upping the gap to 3'35" by 57km. Amets Txurruka, involved in the crash earlier, quit the race, followed by Pavel Brutt just minutes later. These early abandons were evidence that today was going to be hard-going, as was Arnaud Coyot when he was seen vomiting at the roadside. As the escapees reached 84km, just before embarking on the first of the Category 2 climbs, the gap had been reduced to 3'10" and it began to look as though they were going to be caught on the slopes of Puy Mary, the volcano which proved to be one of the best parts of the stage. It was at about that time that the Contador-Karpets incident took place - the three-times Tour winner was soon on his way back to the peloton, though an issue with his rear derailleur required some technically-against-the-rules on-the-fly repair work. 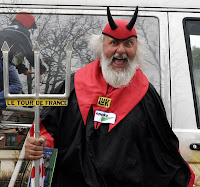 The three kept going, encouraged no doubt by the Devil who was waiting to cheer them on up Puy Mary's slopes - right where we said he'd be, incidentally! - but the gap had decreased even more to 2'40" by the time they reached the next climb. However, the peloton were still heading up the volcano, so the leaders were able to hammer on again and stretch it out to 3'35" by the time they reached the Col du Perthus, where Hoogerland collected five points.

Hoogerland had cpme very close to what would have been a pontentially very nasty crash while descending, having to unclip from his left pedal and put his foot out in order to remain upright as he negotiated a fast bend. Sadly, those riders involved along with Vinokourov in the big crash were not as fortunate and as Hoogerland saved himself, the Tour came to an abrupt end for several riders.

The peloton had slowed, word of the severity having reached the front of the pack where the leaders apparently made a decision to wait for their fallen comrades, which allowed the gap to increase to over six minutes as the escapees made it to the summit of the Col de Cere, where Hoogerland collected another two points for being first to the top. He couldn't keep up with Voeckler on the way down, but before long the Frenchman was going too fast for comfort and the two agreed to slow things down and travel at a safer rate. Millar, suffering from the effects of his crash, called for assistance but was able to continue just as news came through that David Zabriskie had abandoned. Confirmation of Frederik Willems' decision to leave arrived five minutes later.

The peloton split into two again as some riders found themselves unable to continue at the high speeds thus far maintained. Hoogerland was first once again over the Col du Prat de Bouc and the trio had made it to 38km to go with a 5' minute advantage shortly afterwards; making it look rather as though we were going to see a second successful breakaway in as many days. But, it was not to be, for it was at this time that the car got too close.

Voeckler had now joined forced with Casar and Sachez, crossing the intermediate sprint finish line just behind the former and just ahead of the latter. Flecha, working hard to catch them, was almost 2' minutes behind - which, though they were bearing down upon him, was still ahead of the peloton so he collected the 13 points for 4th place. An unchallenged Philippe Gilbert was the first of the main group through and took 11 points. Cavendish, for once, didn't bother.

Flech's efforts had been admirable but he'd fallen hard - most riders would not have continued had they have been through a crash like the one he had - and the stress showed because he simply could not keep the pace set by Voeckler's gang. He had now dropped back to 3'10" behind and was fading fast. Meanwhile, a blood-soaked Hoogerland was still going: he was 6'53" seconds behind, but he was still going.

Minutes later, as the leaders passed the 20km to go banner, the peloton caught Flecha. When they reached 15km Hoogerland was 12'30" back, but still going.

Flecha had had all he could take, but as he began to fall away from the peloton nobody could possibly doubt that he can take a hell of a lot. He was still falling back as Sanchez crossed the finish line closely followed by first Voeckler and then Casar. Though they came first and though their race was admirable, they're not the heroes today.

Hoogerland and Flecha have earned themselves an entire chapter in the road racing history books. 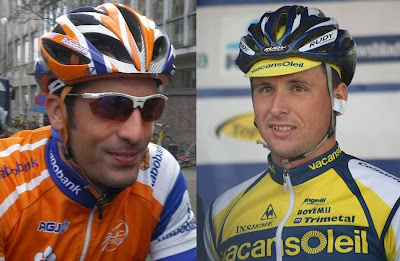 
Arse of the day: some idiot (and hopefully now ex-)car driver with Franch TV.
Posted by john_orbea at 20:34