Can you believe that today marks the end of the first week of the Tour de France? All those weeks of waiting and we're a third of the way through already... but, let's not think about that just yet: we have a whole fortnight to go and should make the most of it while it's here. It's a nice stage today, too: long at 218km, taking us from Northern France right into the nation's heart, and although it has no real hills - the most formidable is a 56m climb over 21m, which doesn't really count - the entire parcours slopes gradually, imperceivably upwards. A rise of 100m over the entire route sounds like nothing, but it does contribute to overall fatigue and, since the intermediate sprint starts at the 192.5km point today, will make a difference to the similar feel that the last few days have had.

It's a day for the sprinters but it's not a day for early breakaways, that being a tactic much used thus far in this Tour. Of course, it might still happen - get a lead group going and drive it all the way to near the end and you've pretty much got the Combativity award in the bag, but very few riders have the capability of breaking away in the first few kilometres and keeping it going until the sprint; so it could be that the big hitter sprinters such as Mark Cavendish and Thor Hushovd find themselves in a position to go for the 20 points today before settling down in the last 20km and preparing for the mass sprint to the finish line which will surely happen today. There's one other rider who might show an interest in 20 points too - Ben Swift is making his Tour debut this year and has shown a hell of a lot of promise so far. Encouraged by his team's stage win yesterday when Edvald Boasson Hagen worked with Geraint Thomas to defeat Hushovd, he might pick today as the day to make his mark. 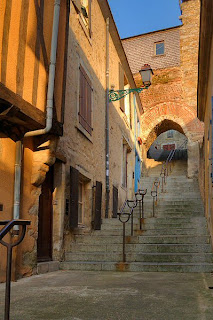 The start, Le Mans, is a town that will always be associated with motor racing as it's hosted the world-famous 24-hour race of the same name since 1923 (the stage begins on the hallowed track), the world's oldest endurance race and which has given rise to such iconic sports cars as the "Blower" Bentley and the Porsche 962. Le Mans' history stretches back a lot further than that, however, the earliest mention of the town being found in the writings of Ptolemy and the ancient amphitheatre providing more physical proof. It has traces of other ancient buildings, but these were largely destroyed by their own builders during the Roman Crisis of the Third Century when the Empire came close to collapse and Le Mans' baths (thermae) were demolished so that the masonry could be reused to build the city walls which today are among the best-preserved Gallo-Roman defensive walls anywhere in France. Medieval Le Mans was built on top of earlier architecture; creating an attractive mixture of styles which in some parts gives a strangely Middle Eastern feel not unlike the old sections of Jerusalem or an Arab casbah.

It's yer usual rolling Northern French countryside, pretty churches'n'chateaux and - no doubt - giant bikes made of hay bales all the way today; notable highlights being the Chapel of Our Lady of Pity at Parigné-l'Évêque (21km from the start) which out-goths anyone you can mention by having a Lantern of the Dead, a tower much older than the chapel to which it is attached that contains a lantern kept burning to guide souls upward. Le Grand Luce is host to a number of chateaux, including one enormous example with vast formal gardens on the southern edge of the town. 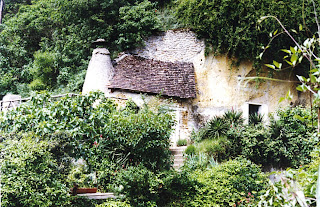 Should you ever happen to be in this part of France, the little village of Trôo should under no circumstances (well, maybe under some extreme circumstances, zombie apocalypse and the like) be missed because some of its 326 inhabitants still live in caves. We should point out at this time, so as to avoid insulting the troglodytes and disappointing visitors who rely on no website more serious than this one before travelling to little French communities, that when we say that we don't mean the locals are slope-browed cro-magnons who subsist on berries and mammoths: many of the caves, dug into the soft limestone cliffs, are very comfortable and desirable cottages. Trôo is also home to two unusual wells - one being a petrifying well (there are others in various limestone regions around the world) which, if any object is placed into its water, will coat it with a layer of limestone making it look as though it's been turned to stone and the other being a talking well of all things (we can't quite work out what it does from the official commune website, but it appears that the well is constructed in a shape that returns a booming echo if you shout into it). Herbault (95.5km from the start) is a town that exists only because one man wanted it to be there - Dodun was Louis XV's minister of finance and seems to have built the town simply because he felt that his new chateau needed a town to go with it. The locals are called Herbaltois, which sounds like something irritatingly pretentious people might ask for in Waitrose.


The feeding station comes at the 104km point today and, since it's a fast stage and the weather looks set to be wet, may be the site of crashes. The area, Chaumont-sur-Loire, boasts an especially popular chateau that looks like it comes straight from a Disney film about a princess and which like a lot of chateaux that resemble castles probably wouldn't resist a siege for five minutes. Montrichard (130km from the start), despite the name, doesn't have a hill. It does, however, have a large underground quarry that was used by the Nazis as a bomb-proof ordnance storage facility. They attempted to destroy it when American troops got uncomfortably close, but most sections have since been cleared and guided tours are conducted. Nouans les Fontaines is the home of a large sports equipment manufacturing family which can be expected to make the most of some free publicity with some sort of construction or event easily noticeable from the helicopters. 17km further on is Écueillé, a hotbed of Resistance activity during the war.

The sprint comes 19km after Écueillé, 192.5km from the start which - as we pointed out earlier - means that any breakaway group that wants to build up a big advantage early on and then take the lion's share of the points before the main group arrive are going to be very hard pressed to do so. It's an almost perfectly straight road with a very slight upward kick in the final kilometre, encouraging high speed and a fight at the end - if it ends up as a battle between Hushovd and Cavendish, it should be quite a spectacle - comparisons to a Dodge Viper racing an Ariel Atom seem apt: pure, muscle-bound power against light-weight, acceleration and efficiency.


It's not much further to the end once the sprint's over, but since this is the Tour de France there's enough time to squeeze in a few more chateaux and the ruined example at Villedieu-sur-Indre is a good one despite lacking windows and most of its roof - if anything, the ivy which is beginning to take over the structure adds to the overall effect. Châteauroux, the stage finish town, is home to more than 40,000 people - as the name suggests it features a chateau, in the shape of the very imposing Chateau Raoul dating from the 10th Century, which perches on the banks of the Indre river and looks like the wicked witch who wants to capture (and no doubt kill) the princess starring in the same Disney film that features Chaumont's chateau.

So, then. Winners. Edvald took us all by surprise yesterday - a lot of people expected Hushovd to take the stage, but Sky's secret plan worked brilliantly. Hushovd is an obvious choice again today, as is Bradley Wiggins and we wouldn't be surprised - delighted, they're both top guys - if one of them won. On the other hand, there are still a lot of stages to go and Bradley has the best chance of winning some for his team, so it's possible that if Ben Swift feels good today Sky will work a similar plan with the intention of getting him across the line first. However, this is a parcours which might prove to suit the Classics specialists and the most special of those in this Tour is Philippe Gilbert - unless he takes a backseat today and hands over responsibilities to Andre Greipel.  Wildcard - is it just us or is there something about today that says Levi Leipheimer?

Weather: Showers are forecast all day today in Le Mans, probably lighter than the downpours of yesterday but more than sufficient to make the roads slippery. It's more of the same around Trôo and Herbault and while it ought to clear up around the time the peloton reaches Orbigny, the waterproofs will be back out again at Écueillé and in all likelihood will stay out until Chateauroux. The real issue today is going to be the wind; it's coming from the south west, just as it did yesterday when it was blowing in the same direction the peloton was going and thus helped to achieve high average speeds, but today the route travels south east - and that means crosswinds. With windspeeds averaging about 20kmph and gusts up to 30kmph, expect echelons as the riders attempt to keep out of it. 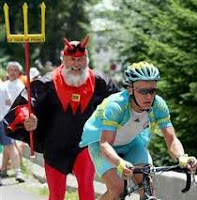 DEVIL WATCH: Unusually, the Devil might put in an appearance early on in the stage today - there's a long forested section just outside Parigné-l'Évêque on the D304 which looks like a suitable Devil haunting ground. Failing that, there are woods on the way into Orbigny too. Our best bet, though, is the bend where D943 curves around Chambon before reaching Villedieu-sur-Indre.
Posted by john_orbea at 09:53