Each year brings new calls that the Tour de France is concentrating too much on the climbs, that it's becoming a race for climbers alone. This year is no different, for there are several blogs - some amateur, some maintained by professional journalists - claiming just that. However, there are also many who do not agree: the Tour is, after all, famed as the hardest race in the world and mountains are hard. They're also beautiful, and beauty is as important an aspect of the Tour as its difficulty.

Today, meanwhile, is one of those stages which anyone could win. It's most definitely not flat, or not once the first 86km are done and dusted anyway, but with the highest point at 335m it's not mountainous either which means it could be won by a strong sprinter having a good day or a grimpeur who can also ride fast on the flatter roads. In other words, it favours the puncheurs, those who are good on a variety of terrain and who are always ready to take advantage of any opportunity to present itself whether doing so requires clever tactics or sheer hard slog.

Those first flat kilometres will encourage a breakaway, permitting those who have little chance of a high General Classification finish to have their chance in the limelight and even, if they can keep it up over the first and biggest climb of today at Côte de Saint-Michel de Montjoie, the opportunity to win valuable points by being the first through the intermediate sprint section. On the other hand, any sign of weakness on the climb and the peloton will reabsorb them, the points no doubt going to the big-hitters such as Mark Cavendish, Thor Hushovd and Geraint Thomas instead.

Three categorised climbs - two Cat 3s and a Cat 4 - are sufficient to change whatever order develops during the flat section entirely. Lead groups, having expended their energy through the hard work of getting ahead and remaining there for as long as possible will start to suffer, often falling right back to a lowly position. Sprinters who have tried to tire the climbers by keeping the peloton rolling along at high speed will need to have judged things just right, otherwise it'll be them that suffer. It is perfect, an ideal stage. 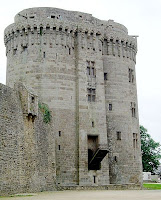 It's also long at 226.5km, not just the longest so far this year but the longest in this Tour and as ever passes through some of the best scenery on offer in a country renowned worldwide for its aesthetic charms. The starting point is Dinan, a medieval walled town on a hillside next to the Rance river which, a few kilometres to the north, is dammed at the world's first and largest tidal power station. Many of Dinan's buildings date from the 12th and 13th Centuries, including the imposing Donjon de la Duchesse Anne, also known as Dinan Chateau. 20km on is the bustling town of Dol-de-Bretagne, where legend has it that the Scottish Stuart royal dynasty originated and Welsh saint Teilo tamed a dragon which he kept tethered to a rock. The town boasts a cathedral dating to at least the 13th Century which has one-and-a-half towers. The left-hand tower, it is said, was partially destroyed when the devil (no, not the German one) threw an enormous stone at it - in actual fact, it was simply never completed and the stone, still standing nearby, is the enormous Dol Menhir which predates the church by thousands of years.

This being the flatter part of the parcours, the peloton will soon cover the 32km along the coast until it is adjacent to one of the world's best-known and most celebrated places, Mont-Saint-Michel. Work is in progress here to build a hydraulic dam designed to prevent silting up of the bay in which the World Heritage Site Mont stands so that it once again becomes an island. The monastery in Mont-Saint-Michel was established by St. Aubert, rather a lazy saint who required several visits from an angel instructing him to begin the monastery. Eventually, the angel became irritated with the repeated promises to get on with it and, using an angelic finger, burnt a hole through the saint's skull. That persuaded Aubert to get his act together. There is absolutely no way whatsoever that the camera operators in the helicopters will miss their opportunity to bring us footage.

As the peloton crosses the River Couesnon, it passes from Brittany into Normandy. This entire part of France was, in earlier times, the scene of countless skirmishes and invasions among the Bretons and Normans - in fact, the battles still take place but nowadays nobody is killed and the warring factions drink a lot of beer together afterwards. A little further on is the commune of Avranches where a more modern invasion took place: Patton Square, with an American tank displayed, commemorates the breakthrough of General Patton's Third US Army which began their heroic efforts to free France - and ultimately, all Europe - from the Nazis here in 1944.


Aside from a sharp bend leaving Avranches, the route stays straight as it passes through Brécey and up the 270m climb to Côte de Saint-Michel de Montjoie which at 2.4km has a gradient of around 5.9%, sufficient for it to be a Category 3. 15km further on is Vire, a town now home to almost 13,000 people, which in 1944 was almost entirely destroyed by British bomber aircraft due to a mistake in the positioning of signal flares. The peloton will have covered 114km by this point and riders will doubtless be happy to reach the feeding station.

Next up is the sprint. Who can tell what will happen here today? Will it be like the last few days, when an early breakaway has seen a lead group of riders take the lion's share of the points and the peloton have fought it out over the scraps? Or will any such breakaway be caught on the climb? Will Mark Cavendish, enthused by his remarkable stage win yesterday, go for glory? The one thing of which we can be certain is that it'll be a spectacle, as is apparently guaranteed by the new intermediate sprint rules which must be among the most popular UCI regulations among spectators for many years since they really do seem to encourage thrilling competition.

After another km comes Côte du Bourg d'Ouilly, the first of the two Category 4 climbs, with a maximum gradient of 5.6% in its 2.7km ascent - not a mountain by any standards, but noticeable even to the likes of Andy Schleck and Alberto Contador after 157km. Since this is such a long stage, many riders will need to very carefully pace themselves here in order to avoid using energy upon which they'll rely to complete the 70km that still remain to the finish. On the way down, the route takes in Falaise which was the birthplace in 1028 of none other than William the Conqueror - according to legend and some local tour guides at the impressive Chateau de Falaise, but in fact the castle wasn't begun for around a century after William's birth. Falaise was also the location in the medieval period of the famous Rabbi Yom Tov, grandson of the most famous rabbi of them all, Rashi, who produced comprehensive commentaries on both the Tanakh and Talmud which are now an essential part of Jewish study. Like Vire, Falaise was heavily damaged by Allied bombing during World War 2. However, here it was deliberate, a precursor to the battle of the Falaise Pocket which resulted in the deaths of 10,000 Nazi soldiers and the capture of 50,000 more. Epic win, as they say. 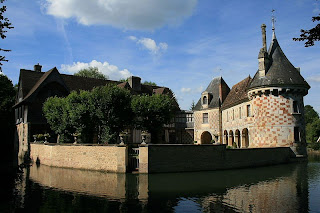 Soon enough is the last categorised climb for today, Cat 4 Côte du Billot. At its highest it's only 196m above sea level but it reaches this height in 1.3km which creates a maximum gradient of 6.5%, the steepest section of this stage which, after 197km, is going to test the riders' strength. 197km is around the average length of a stage, but today they still have 29.5km to go. There's a sharp bend in the road at Livarot, just before the 20km to go point, with the final section passing through Saint-Germain-de-Livet which is the location of one of the most beautiful chateaux in the whole of France.

Yesterday, Mark Cavendish mentioned his belief that the Tour's organisers have deliberately arranged final kilometres to prevent the HTC-Highroad's trademark lead-out tactic that has seen them dominate sprint finishes in recent years. If this is indeed the case, today appears to be another example of it with a steep 88m climb over the two kilometres preceding the last. However, the team - known as master strategists - have responded with a new plan, as seen yesterday when Cav emerged from the pack and exploded over the finish to win the stage.

Today's finish is in Lisieux, once the capital of the ancient Celtic people named the Lexovii by the Romans and who were brave enough to take part in an uprising against the mighty army of Caesar in 52 BCE despite being massively outnumbered by their highly-trained and well-equipped enemy. The town was the site of the world's very first successful helicopter flight in 1907 by Paul Cornu, a bicycle manufacturer, in a craft which relied heavily upon the bicycle technology of the day. It is also home to the remarkable Basilica of St. Thérèse.

So, can he do it again? You know what? We think he probably can. However, the Missile is not known for his skills in the hills and so the climbs may take their toll, preventing him from managing another first place. He's the fastest rider around, but if today is won by a sprinter it'll more likely be one of the hardmen such as Thor Hushovd. A tough all-rounder like Cadel Evans is a definite favourite - and that's a category which also includes Bradley Wiggins who has come to this Tour looking like a half-starved wolf, a very dangerous animal indeed. We did say earlier that a fast-on-the-flat climber could do well today, which introduces a few wild card possibilities - one name that springs to mind is Frank Schleck, another is (of course) Alberto Contador who, unusually for a climber, can hold his own in any sprint. 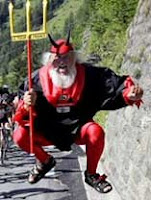 DEVIL WATCH: A difficult one today, because it's well-known fact that the Devil likes climbs - but there are three choices, and he could appear on any one of them. We think that the Côte du Billot is the most probable because it's near the end and, with the steep gradient, should slow the riders - and hence the camera motorbikes - sufficiently for him to get in shot.

Weather: It's fairly cool in Dinan right now, 19 degrees C and not predicted to get any warmer due to the overcast skies, which also bring an 85% probability of rain which may be heavy. The wind is coming from the south-west, but at 20kmph shouldn't cause major problems and in fact as a tailwind will likely generate high average speeds if it doesn't alter direction - it may, however, be stronger and changeable on the summits, which can be subject to southerly blasts coming from the English Channel. The rain should stop later on and breaking clouds in Lisieux later may allow the sun to dry the roads for a fast stage finish.
Posted by john_orbea at 11:20