Yesterday's Stage 1 was a total crash-fest with rider after rider going down, which means the team masseurs will have been working hard all evening soothing aching muscles in preparation for the rigours of today's team time trial which, being almost entirely flat over its 23km course and not especially technical, is likely to encourage pedal-to-the-metal extreme high speed.

The race remains in the Vendee region with the start and finish in Les Essarts, a town noted for its 11th Century castle (there's some disagreement on the age - Vendee tourist info says 11th C., the Tour de France website says 12th C.) and St. Peter's Church which has every appearance of a cathedral picked up in a city and then set down again in this town of a little over 5000 people and which the Tour website insists is built on the site of a 12th C. Roman church, despite the fact that the Western Roman Empire had come to an end some seven centuries prior to the 12th C. That aside, Les Essarts is one of those quintessentially French towns, popular with British visitors seeking an authentic French experience, and residents have always provided a very warm and enthusiastic welcome for the Tour's numerous visits so they'll be really pushing the boat out in celebration today when their town serves as both start and finish.


From Les Essarts, the road is almost poker-straight to Boulogne, an attractive small town 8.5km from the starting line which, though claiming to have a "modest" economy on its website, has won a number of awards for its public flower beds. All French towns consider it a very great honour to be visited by le Tour, so a town known for its flowers in one of the most cycling-obsessed parts of the country is likely to be colourful to say the very least. Next comes a road that, but for one sweeping bend, is perfectly straight and made for helicopter footage as the teams build up to full speed, then a sharp left-hander taking them through the tiny Ste. Melanie des Gats as they turn back towards Les Essarts. Travelling along the D98 road, they'll pass patchwork fields and a small wooded section before coming to La Merlatière, a quiet country town with around 800 residents. The road then remains straight, passing La Maison Neuve des landes, site of a new village which when complete will feature 650 homes,  until one final sweeping bend heads back into Les Essarts with several corners requiring concentration as the riders make their way at high speed through town to the finish line.

Team time trials have a habit of changing General Classification standings dramatically, because it's all about the team rather than the individual. In this instance, the time awarded to each team will be that recorded as the fifth rider crosses the line and so they must work together, swapping places and slipstreaming according to each rider's strength and specialities, in order to maintain maximum efficiency. Enormous amounts of time are spent and data examined in pursuit of this goal, but cycling is not an exact science - it only takes one rider to be having a slightly off day and the very best laid plans can begin to crumble, causing riders and team bosses to have to think fast and on the fly if the team is to perform as well as possible.

Team Sky have stated that doing well in the time trial is one of their main objectives in this Tour, and with Bradley Wiggins and Geraint Thomas - both excellent time trialists - on the squad they can be expected to record an impressive time. HTC-Highroad, Garmin and RadioShack will also likely put on an impressive display as each team has some riders who excel int his sort of competition: TeJay van Garderen, David Millar and Dimitry Muravyev are all names that spring to mind. LeopardTrek are a team dominated by the big name mountain specialists Andy and Frank Schleck but it would be a serious mistake to underestimate them today because they have a fearsome weapon in the shape of Fabian Cancellara, considered by many to be the finest time trialist in the world today and who is more than capable of getting his team across the line with an impressive time.

When it gets down to it, we think today is going to be all about Sky and LeopardTrek, but while we're hoping for the British team to win we really wouldn't want to put a bet on it.

Local weather looks set to be very warm by the time the racing starts with maximum temperatures up to around 26 degrees celsius. Wind speed should vary with gusts between 19 and 30kmph - the parcours is described as largely sheltered, but crosswinds may cause problems in some sections. 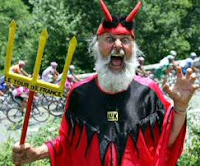 Devil Watch: that wooded bit just before La Merlatière may prove a likely spot - in general, the Devil prefers a climb near the finish but with the total lack of hills today he could opt for tree cover instead. Look out for his trademark trident symbols painted on the road, an indicator that he's haunting the roadside somewhere nearby.
Posted by john_orbea at 11:09