Tour de France: Stage 19 Debrief - not the Queen stage, but it ruled 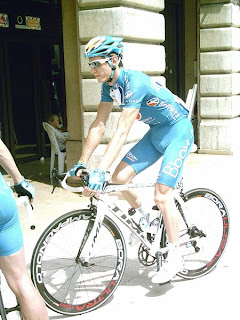 "A squalid, manic and sometimes lethal shambles, and that's just the way they like it. It's the Glastonbury Festival for cycling fans." (Tim Moore, author of French Revolutions)

It couldn't be Bradley and it wouldn't be Andy, so that left us cheering for our third hope today - any Frenchman. We're not French but, well, it's their game, isn't it? Pierre Rolland's incredible victory today was a lot more than just a stage win - not that there's any such thing as "just" a stage win, especially when the stage contains the Cols du Telegraphe and Galibier and the Alpe d'Huez - it was a chance for the country that elevated cycling from a sport to a religion to have a much-deserved taste of glory.

The People's Hero Thomas Voeckler rode well, driving himself onward despite obviously being in a great deal of pain and even managed to outgrow a little temper tantrum that saw him take a bidon from the Europcar team car and then smash it to the ground. He's done a superb job in this Tour and has been a more-than-worthy rider to wear the yellow jersey for nine days, but he knew as well as the rest of us that he owes a lot of thanks to Lady Luck and can't be at all surprised that he now has to give it up to Andy Schleck.


"I have never been so close to winning the Tour in my life. It’s a dream I have had since I was a little boy. I’m incredibly happy." (Andy Schleck)

Andy rode well, marking Contador and Cadel all the way; although he couldn't take the stage, his excellent time combined with yesterday's win was sufficient to give him a 53" lead in the overall General Classification. However, nothing is set in stone and no clear winner has emerged yet, so whether or not he can keep the yellow jersey depends on the individual time trial tomorrow - not Andy's forte, though he's improved massively in the last two years. The trouble is, Cadel Evans isn't bad in TTs at all - in fact, he's far and away the best among the new top ten GC riders.


"As a sprinter it's not a nice sight to see Alberto Contador attack at the bottom of the first of 3 massive climbs!" (@mattgoss1986, Twitter)

Contador earned the Combativity award, having attacked from the 15th kilometre. Let's just hope it's not also a retirement present, because he really livened up the race: he told reporters after the stage that he mounted the final attacks on the slopes of Alpe d'Huez "for amusement" - professional cycling would be poorer place without his presence! The three-time Tour champion is now 3'55" behind in the overall General Classification, almost certainly too large a gap to be in with a chance of winning the Tour, but he'll have won himself a few new fans with his efficient and dissuasive response when an aggressive spectator dressed as a doctor complete with surgical mask - presumably trying to make some half-formed point about doping - gave chase whilst screaming in his face: without even missing a pedal stroke, Bertie delivered a short sharp punch in the face. Good man.


"What an amazing experience that climb truly is legendary." (Ben Swift @swiftybswift, Twitter)

Mark Cavendish was lucky once again to avoid disqualification when he missed the stage elimination time Fortunately for him, he crossed the line with a pack of riders numerous enough to invoke the 20% rule which states that if more than 20% of the starters are outside of the maximum allotted time, the judges can extend it so as to avoid cutting down the number of riders on the following stage to a point where competition would be reduced. He was also fortunate in that closest rival Jose Joaquin Rojas was in the same group as him, so they both lost 20 points - had Rojas have made the cut, he'd now be wearing the green jersey. Meanwhile, Tejay van Garderen questions the wisdom of having such short cut-off times, making the very good point that they encourage some riders to descend at dangerous speeds in excess of their ability: "Having such a short time cut makes riders take more risks on the descents. RIP Wouter."