What a difference a day makes...

Well, to the weather anyway - today didn't make a lot of difference to the General Classification. A change in the weather, as we suspected it might, made a big difference to Andy Schleck too as he was in much better form compared to yesterday, coping with the extremely hazardous descent without problems.

The sun was out and it was warm (apart from at the really high points) as the race officially got under way at 12:36, so the peloton pedaled away from the start line looking considerably happier than they did yesterday when the knew there was a soaking to come. As ever, a few riders tried to attack right off the mark but with the pack rattling along nicely they had no room to move and were reabsorbed even before they'd got out in front. It took about ten minutes for anything to happen, after which a group of ten managed to build up a small lead - with a respectable line-up featuring, among others, Geraint Thomas, Linus Gerdemann, Sandy Casar, Edvald Boasson Hagen and Tejay van Garderen it looked to have legs. This proved to be the case when they upped the gap to 40" at the 20km point.

Meanwhile, with Garmin-Cervelo trying to jolly the peloton along a bit to catch up, Thor Hushovd and Nicholas Roche went on the attack and succeeded in reducing the leader's advantage, a combined effort that successfully brought the gap down to 25". However, it split the peloton in two and resulted in a group of 15 riding some 10" off the front, creating confusion which saw the counter-attack fail and leave the frontline gang of ten with a 40" lead by 34km. There was no way a breakaway consisting of riders of that sort of calibre - half of them previous stage winners - was going to go unchallenged though and the peloton kept driving hard, reducing the gap to 28" within the next 3km and then 18" in the 3km after that; and they were caught very soon afterwards.

By now, small autobus was beginning to form as riders found themselves unable to keep up the high pace over the first noticeable - though uncategorised - climb of the day. Jerome Pineau was the first to go but he wasn't alone for long, as other riders soon fell back to join him. Nicholas Roche, having spent too much of his daily energy quota trying to match the mighty Thor in the earlier counter-attack, was also dropped and found his back too. Tyler Farrar ended up among them too, but only briefly because once the climb was over they clawed their way up to the pack once more. Up at the front, the escapees were still leading and holding the peloton at about 20".

Another counter attack group formed around Bauke Mollema and Sylvain Chavanel, the latter being a possible contender on this stage due to his skill in the descents, and after a chase succeeded in linking up with the escapees, boosting the breakaway population to 14 riders, plenty enough to push the dial up a notch or two so that the were soon 1'14" ahead by 60km, just as news came across that Astana's Paolo Tiralongo had been forced to abandon the race. Over the next 2km, taking advantage of a nature break by the peloton, they'd got it up to more than three minutes and then added another minute by 64km.

Chavanel proved fastest up the second Cat 3 as well, earning himself another pair of climbing points. The escapees were still keeping an excellent rate, increasing their lead to more than seven minutes up the long Cat 2 climb to Montgenèvre. Down at the start of the climb, Nicholas Roche found a second wind and attacked, leading Johnny Hoogerland and another rider out with him and managing to get a little way ahead of the peloton just as Chavanel crested the mountain for his third climbing victory of the day, taking five points for his trouble this time. Very shortly afterwards, they crossed the border into Italy, a frontier where nowadays no passport is required and travelers don't get stopped by officials - a situation that can be held up in comparison to the large and fearsome forts high above the Col de Montgenèvre, built to maintain control over the region and who passed through, as an example of the remarkable progress made in Europe since WW2. 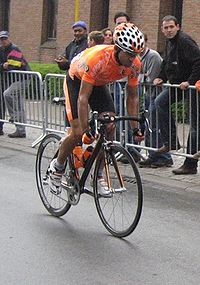 Of course, it's not just the military who use mountainous terrain to achieve an advantage over the foe. The Cat 1 climb to Sestrières at 2035m is long and arduous, a route which as we explained earlier would undoubtedly be an Hors-Categorie were it not for the extremely high quality roads, the sort of ascent that suits those freaks of nature the pure-bred grimpeurs such as Contador and the Schlecks well - any of whom would have used this one to devastating effect were it not for the fact that they can do a lot more damage with the HC mountains in the coming days. This didn't stop the assorted non-GC contenders from scrapping all the way up though, with Perez Moreno attacking 2km from the top - perhaps Euskaltel's reputation as a tribe of hardened mountain men is an accepted fact these days, because nobody in the breakaway group bothered even pretending to respond (he looked quite disappointed actually, apparently wanting a battle).

Downhill, Roche and his comrades were still ahead of the pack but not really getting anywhere, the gap between them and the escapees now increased to over two and a half minutes as Perez Moreno increased his own gap, getting it up to 45" as he reached the summit for 10 points. Chavanel had to make do with second this time, but since second place on a Cat 1 is worth 8 points it was actually a more valuable result than all his earlier climbs combined. Thomas Voeckler was the first of the peloton to complete the ascent, by which time Perez Moreno was still attacking and had plummeted down a large part of the long descent apparently without using his brakes.

Back in the peloton, BMC and LeopardTrek were jockeying for pole position in order to get Evans and Schlecks to the foot of the final climb safely and ready for action which also had the advantage of keeping them all well out of the way when a Vacansoleil rider fell on a tight right-hander into a narrow road, blocking the path for everyone behind him including a Contador-containing group of Saxobankers. Fortunately, nobody was injured and everyone involved was up and on their way before a really big pile-up could form. At about the same time, Nicholas Roche dropped out of the pursuing group with a mechanical problem and Boasson Hagen gain time on Chavanel, rapidly catching him and taking over leadership duties just as Frank Schleck did the same for the peloton.

From this points onwards, it was Edvald Boasson Hagen's day. With 10km to go he'd managed to break away and had an advantage of almost five minutes over the peloton. Jonathon Hivert of Saur-Sojasun gave chase but couldn't get within 10" of him, losing even that when his ambition outstripped his ability and he over-egged a bend coming within centimetres of a potentially career-ending crash down the tree-studded slope to the side of the narrow road. In the peloton, Contador attacked and - a huge relief for his army of fans - Schleck Minor was immediately on his case, leading a small group consisting of Evans, Geraint Thomas and a small posse of other climbers that soon caught the Spaniard. Contador attacked again and again, demonstrating to all those who had written him off earlier in the race that they'd made a big mistake, but at no time was he able to evade Evans or give the Schlecks the shake, with the brothers overtaking and taking it in turns to lead him for a while.

Once over the summit, both Hivert and Hoogerland managed to veer off the road and onto someone's patio - luckily for them, the metal gate was open and they avoided hitting the fence on the other side. Cruel fans will be disappointed there wasn't a goldfish pond, though.

The Sky youngster was now without challengers but continued powering down the hill, leaving eventual victory looking like a definite as he entered into the final 4km - but in cycling, nothing's every 100% certain, especially when a relatively inexperienced cyclist is attacking a 6% descent on a road only a little wider than a large car. It was, just moments later when he crossed the line after four hours and 18 minutes dead after one of the most thrilling and impressive run-ins to finish line for some time.