After 49 long weeks, the day is finally here - the highlight of the cycling calendar and one of the most eagerly anticipated dates in sport: today brings Stage 1 of the Tour de France.

It's an unusual one this year, because rather than a prologue as is usually the case Stage 1 is a proper road stage taking in a U-shaped 191.5km of the Vendée department in Western France, birthplace of Eleanor of Aquitaine, the only woman to have been queen of both France and England and one of the most powerful people in Medieval Europe. The Tour returns to the Passage du Gois, a tidal causeway visited in 1999 when it proved to have a pronounced effect on the day's results due to the slippery, algae-encrusted surface causing a crash which split the peloton by six minutes. Similar carnage may happen today, providing the 198 riders who are taking part with a good introduction to what promises to be one of the most challenging, thrilling Tours for many years.

There's nothing much in the way of climbing over the first 125km today. In fact, until Les Sables D'Olonne  where the road turns inland, when the riders will follow the flat coastline and the parcours reaches no altitude more dizzying than 9m above sea level. Who knows what will happen here? Some riders - especially those more endurance-orientated sprinters who can remain plugging away at a high rate pretty much indefinitely may choose to do so and win their chance to wear the yellow jersey. They may as well, because this is a Tour designed to favour the climbers and once reaching the mountains it's all going to be about them. On the other hand, they might all want to check each other out, assess who looks on good form and who doesn't and save themselves for a final every-man-for-himself dash at the finish.

Roughly halfway through the stage is Avrillé, which brings us to the beautiful 16th Century Château de la Guignardière. The château was built for King Henri II's favourite baker, no less, and has a collection of reproduction Easter Island figures in the garden. Avrillé is also the location of the stage's sprint over a 3km section with 20 points on offer for the victor. Britain's Mark Cavendish, who hasn't been riding half as well this year as he's proved himself able to do in the past, could decide to show what he's capable of here, reminding everyone why it is he's called the fastest man on two wheels and as a result become the first man to wear the green jersey this year. It's then downhill - gently - to the food station at Rosnay. By this point the race will already have covered 104km and so the domestiques will be ferrying musettes back to the captains in preparation for the road to Saint-Michel-Mont-Mercure which may only climb 250m in 70km, a gradient so slight as to go undetected, but remains enough to make its demands on the body. In between, they'll pass through several villages that are characteristic of this part of France including Mouilleron-en-Pareds, birthplace of Georges Clemenceau who, as head of the French Government during World War One was a signatory of the Treaty of Versailles. 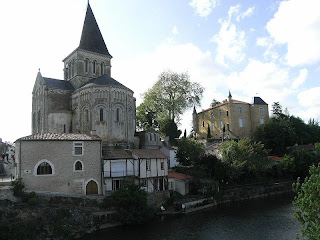 Directly after passing through Saint-Michel-Mont-Mercure the parcours drops steeply into a rolling section of around 11km, the turns sharply heavenwards for the only categorised climb of the day in the shape of the Category 4 228m hill to Les Herbiers where, as it was the location of Thursday's team presentation, the spectators are already fired up and riders can expect an ecstatic welcome.

So, who'll win it today? It's always very hard to tell at this point in a big race. The riders in the top bracket, those who have a real chance of standing on the podium in Paris in three weeks' time, tend to hold back in the early stages - especially when it's a flat stage and the likely General Classification winners are all climbers - so the competition can be handed over to the rest of the pack. Since they tend to be the riders who receive less attention, this means it can be tricky to judge their form. However, it does appear that a battle between Highroad's Mark Cavendish and Sky's Ben Swift is on the cards: Swift is making his Tour debut this year and has hinted several times on Twitter and in press interviews that he plans to go after the Manx Missile. He's been tipped as the Next Big Thing in British cycling by many and has everything to play for, so might fancy wearing the green jersey tomorrow. But then, if he does well in the sprint, he might fancy a go at the yellow.

The one thing that's certain is that the long wait since last year's Tour will soon be forgotten in today's excitement.
Posted by john_orbea at 10:33