What a start to the 2011 Tour! As predicted, the first crash happened on the treacherous Passage de Gois and then it was crash after crash after crash - as soon as those caught up or held back by an accident caught up, there was another one to chop the peloton into pieces and spread it all over the place.

There wasn't much sign of people taking it easy and checking one another out today, as soon as the race proper kicked off Lieuwe Westra (Vacansoleil),  Jérémy Roy (FDJ) and Perrig Quemeneur of local team Europcar leapt ahead and began working on a lead which, at one point, saw them more than seven minutes in front of the peloton. It wasn't long before the other team's top riders began to move up to the front and, gradually, the built the pace up and chased - it took most of the day, though, and the breakaway wasn't put back in their place until a few kilometres from the end.

The second crash saw Anthony Chartreau from Europcar go down, along with another rider from his team and two from Movistar after apparently clipping a piece of street furniture. One of the Movistar riders took a while to get back up again, but seemed alright.

It was a beautiful day in Vendee with a glorious sun in cloudless blue skies. By the looks of things, they've had a lot of sun down that way so far this year because the countryside along the road following the coast looked almost semi-arid, like the less productive regions of Spain. However, fields full of crops suggest water is available. Needless to say, there were vast crowds lining the roads and a good selection of national flags proving that the sport enjoys an international following.


Another crash, apparently once again due to street furniture, not much further on took down TeJay van Garderen (HTC_Highroad), Ivan Basso (Liquigas), Romaine Felliu (Vacansoleil) and Jurgen van de Walle (Omega Pharma Lotto). TeJay was quickly back onboard and surrounded by HTC domestiques helping him to fight his way back up the ranks. Van de Walle looked worst affected, his jersey being badly ripped. Frank Schleck only just avoided becoming caught up too, literally escaping by a few tyre widths.

Nobody quite knew how the new UCI rules for intermediate sprints would work out, but in the end the general consensus was that they were a success. Comments on Twitter, that immediate gauge of public opinion, ranged from "Great! made the sprint as exciting as a stage finish!" to "Horrible - one sprint at the end is bad enough, there's no need for added danger" but were definitely weighted towards the positive. The leading group maintained their advantage into the sprint, which extended over 3km, meaning there was no doubt they'd be taking the top three point allocations but there was everything to play for for those a little further back. In the end, Roy took first, Westra second, Quemeneur third and then Tyler Farrar fourth, Andre Greipel fifth. Mark Cavendish, the world's fastest sprinter, put in a good show but an error of judgement allowed Farrar to surge ahead, at which point the Manxman apparently gave up and rolled across the line in 11th place.

Omega-Pharma Lotto were by this time dominating the front of the peloton with a phalanx of their riders keep things ticking over at a respectable rate. The order began to break down a bit as teams organised themselves in preparation for the feeding station at Rosnay, 104km into the stage. Matt Goss and Fabian Cancellara were seen ferrying bidons back to their teams - unusual behaviour for cyclists in their league, perhaps indicative that neither of them had any intention of winning the stage or even the race. There were no crashes as riders grabbed their musettes, feeding stations being notorious as one of the most dangerous sections in any race, but another incident a few kilometres on brought the peloton to a halt once again: what at first seemed to be yet another crash turned out to have been caused by a small group of riders taking what commentators refer to as a "nature break," known to rest of us as a piss, and other riders misreading the situation.

Camera crews caught up with Sky leader and best British hope Bradley Wiggins a little way further on - his fitness this year is obvious. There is not a gram of fat on his body and his legs look like steel cables. Whether or not we'll see him on the podium in three weeks remains to be seen, but if he stays out of trouble he'll almost certainly finish much higher up than he did last win when he could only manage 24th place, a very disappointing result after he achieved 4th the year before.

A bottleneck going into a tight lefthand bend packed the riders so tightly into a narrow section that Linus Gerdemann (LeopardTrek) and Vincent Jerome (Europcar) were spat out the side, off the road and into the ditch. Lucky for them, they came to rest in a patch of soft grass - it was a hard crash and had it have happened in an urban area on concrete, the Tour might have been over for both of them. Gerdemann seemed to have problems getting his gears and chain working afterwards, but was soon back on and on his way.

With 50km to go, the breakaway group were being well and truly reeled in. Their advantage, whittled away for some time now, was down to three minutes and the trio were beginning to tire but there was no sign of any let-up from the baying mob behind them. David Arroyo, a runner-up in the Giro d'Italia, followed Cancellara's example and ran domestique duties here, carrying bidons from the Movistar team car to his team mates. It was also at about this point that Cadel Evans (BMC) started to assert himself at the front of the pack, pushing his way forward and fighting to stay there - evidence that he intended to account well for himself in this stage.

23km on and the gap between the leading group and peloton was down to under two minutes. Omega were still hogging all the front spots in the main group, but with Sky, HTC-Highroad and Euskaltel-Euskadi also holding their position it remained impossible to make a prediction with any certainty of accuracy. Then another crash took down Sky's Rigoberto Uran who, at this late stage, had to ride hard to regain his position.

As the race entered the final 30km, crossing some strangely corrugated terrain made of a series of small dips and hills, the leaders' advantage was reduced to 44 seconds. They'd had their fun and were going to be returned to anonymity without further delay by the main group which was bearing down upon them like hawks. 5km on  and it was down another 10 seconds and after another five it was eroded away to vitually nothing - with the race now taking place on a long, straight road, the peloton were visible just 11 seconds away, bearing down upon them mercilessly. Philippe Gilbert moved into position, ready to show them how a bike should be ridden.
Then, what will be the highlight of the stage for many people: a Devil sighting! Didi stood at the roadside in his trademark costume, jumpimg with his usual energy up and down and waving his trident about. Several people noted that he's looking a lot slimmer these days - at almost 60 years of age, keeping up with the peloton might require a slightly more proactive approach to fitness than that assumed by the noticeably rounded Devil of previous years. Good to see it, too - in his 18 years of devilment, Didi has become one of the most popular figures in cycling and the colour he adds to racing will always be welcome. May whatever diabolical plan he has in mind remain a part of the Tour for many more years.

A very fast section followed with the peloton looking more like a motorbike race from the helicopter, such was the high speed maintained. Then, another enormous crash - a spectator got too close, was hit by an Astana rider and caused an accident involving around 30 bikes, more than enough to bring the race to a stand-still once again and splitting the peloton into several groups. Those ahead of the crash built up a lead, those in the crash formed various groups depending on how quickly they could extricate themselves, those behind it watched in despair as the others began to build up a lead which with just a few kilometres to go would be all but impossible to claw back. 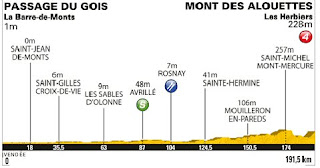 The final 2km were uphill. This had led to some confusion among those of us who like to predict stage outcomes earlier, because it created uncertainty as to which sort of rider would be best suited to the stage profile. Would it be a stage specialist who could build up a big lead in the flatlands earlier on? Would it be an all-rounder or possibly one of those sprinters who can keep up a high speed for a long time? Or would it be a climber? What's more, there were a total of nine roundabouts in those last 2km and with the crash messing everything up the only thing that was certain was that there were still many riders in with a chance of a victory.

Luxembourg's Andy Schleck had been fortunate enough to escape the crash entirely, having been near the front when it happened and this led many people to hope he might triumph - an unexpected early win for the highly popular and well-liked rider. Schleckmania became heated when his group built up a 39" over Alberto Contador, who had been behind the crash - the exact number of seconds' lead gained by the Spaniard when he controversially decided not to wait for Andy lost his chain in Stage 16 last year -  with Tweets buzzing back and forth on the subject of how funny it would be if Andy beat his rival by this time. Andy has publically said that he has forgiven Contador for the chain incident, but it seems his legions of fans have not. In the end, it went to the sprinters - Andy, along with Bradley Wiggins, fell right back, taking 39th and Wiggins 67th. Another crash didn't help and would usually have invoked the rule stating that all riders behind a crash in the final 3km receive the same time, but for some reason this was overlooked at first, then apparently brought back into play when the final results as published on the ASO website changed.

In the end, though, it turned out that while the terrain was testing for the sprinters, it wasn't steep enough to prevent them laying down the power and streaming ahead those who, like Schleck, are so highly specialised to the climbs they just can't perform in the lowland flats. It was Fabian Cancellara, fed up of his earlier domestique duties, who made the first attack, emerging out of the pack like a rocket and blasting towards the finish line. Many spectators assumed there and then he'd win, but it was not to be because Philipe Gilbert, rated the number one rider in the world on the IG Markets index, was even faster. He gave chase and caught him but didn't overtake, keeping him just ahead which allowed others to follow. Then, he dropped the Swiss time trialler with metres to go, crossing the line in first place with a trail of riders in his slipstream.

It was, without doubt, one of the most thrilling first stages for many years and somehow, despite the carnage, all riders remain in the race.