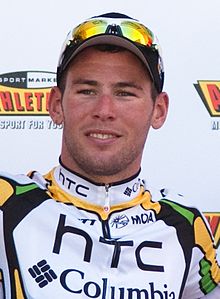 "50k to go THOR: How you feel? ME: Fucked. You? THOR: My eyes hurt from trying to keep them open. Maybe we'll feel ok when we see 25k to go?" (David Millar, @millarmind, Twitter)

Stage 15 may as well have been designed for Mark Cavendish - the flat, straight road to the end being perfect for HTC-Highroad's trademark lead-out train to aim him at the finish line, light the blue touchpaper and retire.

However, although Mark is the fastest sprinter in the world, he doesn't like mountains - and less than 24 hours ago he was grinding his way up the mighty Plateau de Beille in the last of the Pyrenees stage, which introduced a degree of uncertainty into what would otherwise have been a very simple equation: would be have recovered sufficiently to deliver the goods today?

Well, it seems HTC employ the finest masseurs the world can offer as well as the finest male and female cyclists, because when it came down to it he was ready, willing and more than able. Other teams attempted to derail the train, but she kept a-rollin' on even though a few carriages became unhitched along the way and Mark was perfectly positioned for the final assault. A posse of hopefuls chased him across the line and they were close, but once again nobody could do it quite like he can and he earned a glorious 19th stage win.

Since he now has 319 points, compared to second place Jose Joaquin Rojas' 282, it's also looing very much as though he'll be keeping the green jersey for the points competition too - and he makes it look good.

Meanwhile, Tyler Farrar made some comments during an interview with a US television station which some viewers believe suggest he has suspicions stemming from the speedy recovery that would be required to win the stage following yesterday's climbs. It can be seen here.

"Kudos to Mark and HTC, they make that look way easier than it actually is." (@millarmind, Twitter)

The first flat stage after the mountains can often seem a bit of a let-down as the battles that invariably take place on the climbs give way to the peloton and mile after mile of trunk road. It looked for a while this morning as though we were in for another depressing and wet day, with all the crashes that entails, but shortly before Stage 15 began the sun came out and within a few kilometres it became apparent that this was going to be a lot more than a pedal-powered shuttle bus to the next spiky terrain. The attacks began the same moment the pack left the neutral zone and a five man breakaway consisting of Mikael Delage, Niki Terpstra, Samuel Dumoulin, Mikhail Ignatyev and "Benjamin du Tour" Anthony Delaplace soon went to work - a kilometre later, they'd built their advantage to over a minute, making it clear that they had no plans on coming back any time soon. By 8km, they'd more than doubled it.
One big surprise today was Daniel Oss, Liquigas' 24-year-old Classics specialist and guardian of Peter Sagan, who produced an impressive talent for sprinting from the bushel under which he's been hiding it. It seems that with many younger riders doing well outside of their usual roles and even gaining unexpected wins, we're on the cusp of a new generation of great roleurs, a whole era of neoMerckxs (sorry, couldn't resist that term). Marianne Vos is blazing the trail, the likes of Oss and Geraint Thomas are following.
The rain may have stopped, but at this time of year the mistral makes its presence felt in the South of France and provided assistance and caused problems in more or less equal measure - while the route looks fairly straight on the large scale map displayed on the official Tour website, on the ground it zigzags this way on roads that wind around to visit the many ancient towns and avoid the rocky ridges that dot and cross the landscape here, meaning that one minute a handy tailwind was pushing the pack along at a good clip and the next blasting the best laid plans to pieces as the road changed direction and it became a crosswind. Echelons were expected, but perhaps due to tiredness after the rigours of the Pyrenees none formed despite HTC looking as though they were about to assume the positions at a few points.
It was also a superb day for Sky's Ben Swift who managed to power himself into 6th place, a brilliant result for the young British rider who looks one of the obvious successors in a few years when the great and the good of British cycling reach the end of their careers. A lot of people were predicting that Swifty would win a stage this year - that's improbable now, but all the evidence suggests next year will be different. Cavendish may be the first British rider to win the points competition this year, but he's unlikely to be the last.
On other sites: HTC-Highroad have some excellent photographs of the stage (as they always do). Specialized also have some good images, including a superb one of Cav crossing the line (check Daniel Oss' expression!)