What an utter tool...

I've owned and been using one of the original Topeak Alien multitools since, erm, well, I can't even remember now. About as long as they've around, I think - I remember Mountain Biking UK reviewing them when they were brand new and it seemed like the best multitool on the market so I went out and bought one. Not a bad little tool, either, though the tyre levers were useless and snapped the first time I ever tried to use them.
The other tools, however, have been great - in fact, I still use the chain splitter to this day, preferring to the various others that have appeared in my toolbox over the years. I've never used the spoke keys as they're really emergency-only, but the allen keys have seen heavy use - the really thin one snapped (as they do) and the 5mm is now too rounded-off to be used, but the rest are fine. The screwdrivers are still alright, the knife is still sharp even though I broke off a few teeth once trying to do something or other with it and both the safety catch and the clip to hold the two halves together are still working perfectly.

My one criticism of the tool is that, when subjected to heavy usage, the flex in the body was noticeable even from new. It's got much worse in the last couple of months, leading me to believe that sooner or later it's going to snap. My experience with snapping tools is that they almost invariably lead to you accidentally smashing your knuckles onto whichever is the nearest sharp and pointy bit of the bike - usually the chain rings. So, I'm in the market for a replacement. 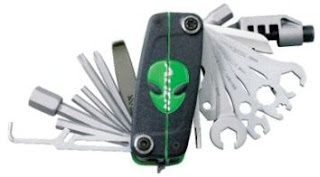 Since my Alien has served me so well (a phrase I recommend you never use within earshot of a psychiatrist), I started off looking at the Topeaks and I notice they haven't been lazy - there have been an Alien 2 and an Alien 3 since I bought my Alien Antique. The 3 is the current model, and it looks like a very good tool indeed:  no less than 25 tough, cro-mo tool-ettes including all your usual allen keys, flat and phillips screwdrivers, 8/9/10mm hex wrenches (a 5mm would've been nice, you still find them on some bikes) and spoke keys for both 14g and 15g spokes, be they Mavic or Shimano. The knife is still there, as is the all-important bottle opener, and it now has a handy compartment for chain pins too, which could be very useful indeed. Since I bought mine, disc brakes have become the norm on MTBs and so it now has a T25 Torx driver too, something I've often thought mine lacked. And the tyre levers are now hardened, leaving them hopefully up to the job. The tool's only two drawbacks are the price - £40! Though if it's good, that doesn't seem so bad - and the weight, which at 272g may mean you need to sew some stronger elastic into the waistband of your shorts. 8/10 seems fair.

8/10 seems fair. The Alien 4 will get at least 9 if they get rid of that stupid alien face. 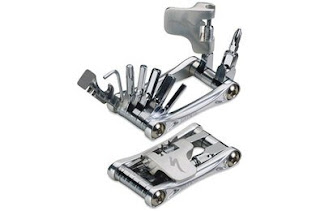 Coming in at round about the same pricepoint (£34.99) is the gorgeous Specialized EMT Pro MTB Multitool. It's got twelve fewer tools than the Alien 3, but most of what you're ever likely to need trailside is there - allen keys from 2 to 8mm and two phillips screwdrivers - no flat, but when did you last use a flat screwdriver on a bike? There's a chain splitter that looks like it should match that of the Alien for ease of use and durability, a pair of spoke keys, a bottle opener and - ta-daaa! - a disc brake pad separator. That's not something I've ever needed on a multitool, but chances are if I bought this one I'd use it. I mean, you might as well. Whereas the Alien is plastic - and has picked up a rather crap-looking green alien face on the side - the Speccy EMT is made of sexily curving aluminium and it looks great. Despite the metal, it still manages to weigh less than half what the Alien does - this being achieved partly by the smaller number of tools and partly by "hollowed-out allen key cores." Hmm - I'm not convinced I like the sound of them. I can picture them snapping if you need to put a bit of pressure on the tool.

7/10 - can't see much call for the disc pad tool and I really don't trust this hollowed-out business. Looks good though. 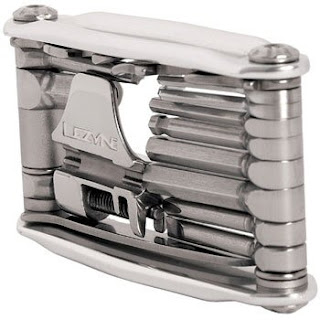 I'd never heard of Lezyne. Whoever they are, they've come up with some smart-looking tools including the Stainless 19 which, as one might suspect, features 19 stainless steel tools including the same allen keys as the Speccy, a chain splitter with a neat rotating tab to make it easier to grasp, phillips and flat screwdrivers, a T25 Torx, three spoke keys (two conventional, one Mavic splined), one combined metal tyre lever/10mm open spanner and one combined bottle-opener/8mm spanner. Like the EMT, it has a disc pad separator. Overall, it looks like a very expensive penknife, an illusion created by the centre-pivoted tools which are intended to make it feel like a "proper" tool in use. It's a whole £ and several grams more than the EMT but in my opinion looks a more solid tool. You can have it in silver, red, blue or gold too, which is nice. If you want something a little more basic, the Lezyne SV10 has a few fewer tools, weighs just over 100g and costs £31.49. 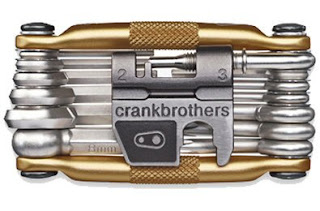 Crank bros.' Multi19 looks impressive, and it has a somewhat petite but usable-looking chain splitter which immediately puts it way ahead of the firm's Multi10 which doen't have one. It's got the standard 2-8mm allen keys, a T25, screwdrivers and the same chunky knurled sideplates as its little brother. One drawback, which most people won't care about, is that the black version has been discontinued which leaves it available only in gold - I hate gold. I'm also not sure about the wrench machined into the handle of the chain splitter - if that's anything other than virtually useless I'll be surprised. At 175g it's no featherweight, but it's also no lardarse like the Alien. £27.99 puts it at the lower end of prices for the best-equipped tools, too. Four spoke keys is more than most of us will ever need.

The Blackburn Toolmanator 3, despite the really stupid name, is fine looking beast that matches the Alien on price. It has a robust chain splitter that looks as though it should easily last as long as the one on my old Topeak, hardened chrome vanadium tools, 8x allen keys between 1.5 and 8mm, T25 and T30 Torx drivers, flat and phillips screwdrivers, a Shrader valve tool and 14g/15g spoke keys. It also has a one-piece aluminium frame for strength and rigidity and is designed both with ergonomics in mind and so as not to snag on clothing or in bags. There seems to be a dearth of information regarding the Toolmanator's weight which suggests it's probably a bit of a lump. However, I don't care - the reason being that the Toolmanator has a mini shock pump! Oh yeah. That's a tool I most certainly would use for small adjustments out on the trails.

9.5/10 - definitely the first choice in this selection, especially since I've just found one online for £25. The mini shock pump is pure genius. 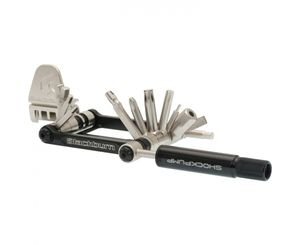