The 2010 Tour of Utah parcours has just been announced and looks to be even more brutal than would be expected of a state characterised by deserts and mountains, proving why it is that this event has become known as the toughest stage race in America. Taking in 409 miles (658km) of the diverse conditions to be found in the region, this year's Tour - the seventh to be held - places particular emphasis on climbing with almost 30,000 feet (9144m) to be tackled over six days. Add to this average summer temperatures of 29 to 39 degrees Celsius and it looks as though those taking part in the event are in for a tough time right from the prologue, which is an uphill-all-the-way time trial to be held at the Utah Olympic Park. 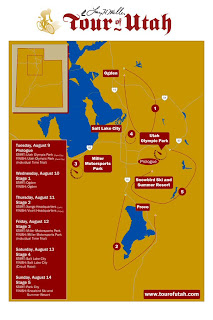 Stage 1 offers no let-up with 187km and 2514m of climbing. Risers will complete a circuit three times to finish the race, making it a superb stage from spectator's point of view, and face a sprint on the flat section to the finish line. Stage 2 is 161km and involves just 860m of climbs, but those metres are spread out across the stage and will catch out who found the previous night insufficient time to recover from Stage 1's tests. Stage 3 is a time trial, held on the Miller Motorsports racing track at Tooele. As a motor racing track, it features several bends to liven things up and though they're unlikely to be especially challenging when negotiated on a bicycle, they'll make an interesting alternative to the standard velodrome layout. Coming at a relatively early stage in the race, the stage should see TT specialists giving it their all and achieving respectable speeds. Stage 4 takes place on a road circuit in and around Salt Lake City of which competitors will need to complete eleven laps, making this another stage that will be popular with both spectators and television crews for the number of times they are able to see riders pass. Stage 5 is intended to be the Queen Stage. It's 161km but, being the final stage, the 3322m of climbing across four mountain sections - including gradients of up to 12% in the final climb - means that all riders will need to have paced themselves carefully over the previous stages if they're to stand any hope of finishing.

As ever with non-European races, steephill.tv offers your best chance of keeping up with the action and will be publishing results and photographs daily during the event. With Levi Leipheimer having achieved a surprise victory in the Tour de Suisse, expect to see him attempting a repeat of his Utah triumph of last year.
Posted by john_orbea at 08:32