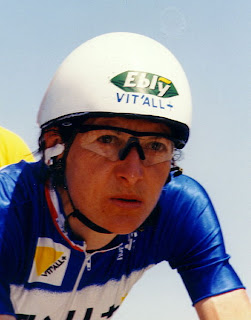 The legendary Jeannie Longo, considered by many people to be the greatest female cyclist of all time and one of the greatest cyclists of either gender, has just added a fourth trophy to her collection won at the French national Time Trial championship.

What is remarkable is that some of her competitors in the event weren't even born when Jeannie first took part in the Olympics back in 1984 and was a mere two seconds short of winning a bronze medal. She's 52 years old.

Jeannie, you are amazing and we love you.
Posted by john_orbea at 10:42